More Reasons Why Deflation Will Rule

We usually like to kick off inflation vs. deflation debates with an incendiary essay of our own, but this time we offer you opinions from two outside sources, one predicting more deflation (Hoisington Quarterly Review and Outlook);  the other, a hyperinflation (Shadow Government Statistics, published by John Williams.)  If you read Ricks Picks  regularly, you’ll already know which side of the debate we’re on. We have shouted deflationist warnings from the rooftops since the mid-1990s, writing on the topic  for Barron’s, the San Francisco Examiner and other publications for longer than anyone else we know of. 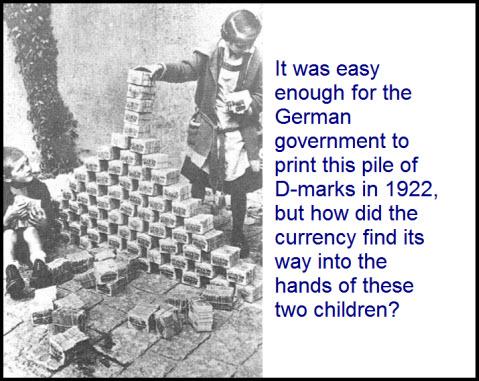 Our grasp of deflation’s inexorable logic began with the 1976 book, The Coming Deflation, by the late C.V. Myers, and continued with Davidson and Rees-Mogg’s The Great Reckoning. Although Myers’ work was obviously premature, the economic law on which his argument rested is immutable:  “Ultimately, every penny of very debt must be paid – if not by the borrower, then by the lender.”  This is the crux of the inflation vs. deflation debate, and because of the way Myers framed it, we’ve never had any doubt that the U.S. would eventually experience a catastrophic deflation (see: UK Deflation). We were early in thinking the financial system would topple as a result of the allegedly “mild” recession of 1990-91 and its S&L crisis. In retrospect, it’s clear that we lacked the imagination to see that the huge amounts of Third World debt that threatened the global economy at the time were relative chump change compared to the galactic sums that Bush, Obama and the Federal Reserve have advanced the banks in the last three years in the futile hope of saving them.

We should mention that although we agree a hyperinflation in the U.S. is all but inevitable, we have no patience for generic predictions that say only that it will occur at some time in the future. Of course it will.  It absolutely must, since the U.S. is far, far deeper in hock than the taxpayers can ever repay with real money.  But that is not the point. The more immediate and crucial concern, practically speaking, is whether a hyperinflation will be launched in time to bail out the 80 million or more homeowners who eventually will be underwater on their mortgages.  Looking at TARP and all of the other bank-friendly bailouts that have been tried so far, we have strong doubts that property owners are about to be saved by a screw-the-lenders uprising on Capitol Hill; moreover, we doubt that the beginning of a hyperinflation spiral is even imminent. Whatever happens, hyperinflation will not come by accident;  it can only occur as a result of a deliberate political decision. Anyone who argues or believes otherwise, or who thinks “helicopter money” is forthcoming, should read Adam Fergusson’s When Money Dies: The Nightmare of the Weimar Collapse.  We’ll lay odds that not one inflationist in a hundred could explain how all of that German printing-press money actually found its way into the consumer economy. But this book explains it in detail, and when you understand how the Germans did it, you will understand why we cannot – at least, not without the legal and political mechanisms that were in place in Germany in 1921, such as the statute that permitted certain large employers and local authorities to issue their own scrip. This provision alone helped kick the Weimar hyperinflation into high gear when the government’s currency-printers went on strike in the summer of 1922.

Not that we will necessarily want to duplicate Germany’s feat, since, as I have pointed out to the inflationists innumerable times, effecting a hyperinflation would be tantamount to destroying savers and lenders as a class as well as all of the institutional conduits of savings, such as the bond markets.  Considering the price we would pay – a generation of credit-less destitution — is it any wonder that both Bush and Obama have favored bailout schemes designed mainly to keep the banking system from going under?  A cynic would say that the government knew all along that the banks would not lend the bailout money – that they would instead deploy it in stocks and Treasury paper, creating the illusion of recovery.  Regardless of whether Obama & Co. knew this would happen, it has in fact happened, resulting in a bank-lending collapse with deflationary implications that would seem to be impossible to deny. But that hasn’t stopped the inflationists from trying.

One of them is John Williams, an economist whom we greatly respect.  He has assiduously tracked U.S. unemployment figures, revealing the brazen fraud that underlies the Labor Department’s monthly data. His estimate of U.S. unemployment has been creeping toward 20%, double the official estimate. But on the subject of hyperinflation, Williams appears to have loosened his usual standard of proof. For one thing, in his 36-page “Hyperinflation Special Report,” he goes on for 28 pages before even describing a plausible trigger for hyperinflation – i.e., the direct purchase of Treasurys by the Fed.  Peter Schiff has already covered this ground and made a far more compelling and detailed case for hyperinflation. He foresees a day when the Fed will be the only buyer of Treasury debt. When other bond markets unsupported by the Fed on that day begin to collapse, it will necessitate Fed monetization of all bonds: munis, corporates and everything else. Voila! Instant hyperinflation. This seems quite plausible to us, though not at the moment.

A more glaring weakness in Williams’ argument is his tacit acknowledgement near the beginning of the report that there is no way for consumer spending to ramp up sufficiently to cause inflation, let alone hyperinflation. He tells us that consumers have no borrowing power (true), that household income has been falling in real terms for a long time and is unlikely to recover (true), and that households have no savings net of what they owe (true).  So how would hyperinflation start in a consumer economy almost completely bereft of purchasing power?  Williams doesn’t say. Nor does he try to estimate, for one, how many Mercedes Benzes America will be importing if the price per car is $50 quadrillion?  Or how much oil we will buy at $10,000/barrel. But the question remains nonetheless: How will all of that money to bid prices up to those levels enter the consumer economy?

Even without answers to these questions, Williams’ monograph is well worth reading because it brilliantly describes the forces that are causing the economy and financial system to fail and explains why this trend is irreversible. No one steeped in the details of this scary report could remain unpersuaded that the worst is yet to come for the U.S economy.  And that is why we strongly recommend that you read it. [The original report, we’ve come to learn, is copyrighted material. For more information, visit Shadowstats.com.]

We promised a good argument from the deflationist camp as well, and it has come to us in the form of a quarterly report from Van Hoisington and Lacy Hunt at Hoisington Investment Management Company.  This is one of the best and most insightful reports on the mounting juggernaut of deflation that we have seen to date.  The crux of it is contained in a single paragraph – one that die-hard inflationist and money-supply junkies will need to think about before they come to the Rick’s Picks forum armed with yet more half-cocked and ultimately implausible arguments:  “The federal government’s promise to extricate the U.S. economy from this recession involves more spending (increasing public debt) and more subsidies for consumers, such as car rebates and home buying incentives (more private debt). In other words, more debt is supposed to solve the problem of over-indebtedness. The truth is that this policy merely indentures its citizens further without providing any income for repayment of debt.”   Click here to access the full report.