Few May Imagine What Is Coming

[From self-described, “radical ol’ gloom-and-doomer” and frequent Rick’s Picks forum contributor Steven George Fair, here’s a tormented essay on why most of us are too far removed from the experience of the 1930s Depression to have any idea or imagination about what is coming. And make no mistake, he warns: Bears who think their timing and strategy will be good enough to gloat about are the most delusional of us all. RA]

There seems to be a single constant in the financial world, and those who play.  There are few if any perma-anythings, with most chasing the bull, or chasing the bear as a bear-bull in the moment.  It looks like the last of the Perma for Life people are dying off as the last of the generation that endured the Great Depression find their rest in the soil.

The generation who made roads in the dirt, flew paper airplanes, and dreamed the impossible dream are now gray haired, and either broke or millionaires.  There is little ground in between the extremes that was once a maxim 20-60-20 rich/middle class/poor.  What seems to exist today is a younger generation with no imagination, incapable of taking a block of wood and shoving it around the dirt pile in dreams of logging trucks, and crawler tractors.  Lost are the majority who created art, and music in its natural form.  There are no lifelong collectors of anything, only a headlong rush from contemporary to abstract, and back in hyper-realism.  Value is now replaced with greed, and get it now before the color fades.  Bringing a face to this reality was a conversation with a PhD, retired, from NASA, who spoke to me about the fear in NASA that the upcoming generation’s imagination has been lulled to sleep by fast TV, fast girls, and constant bombardment of stimulation instead of self-generated creativity. 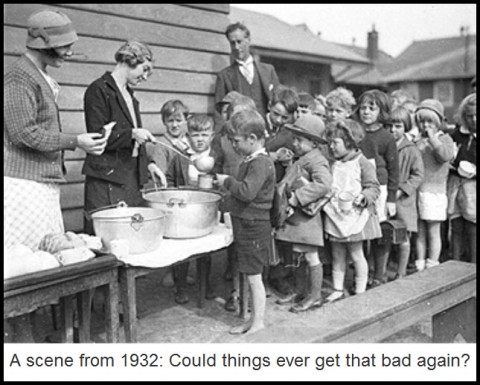 To a more direct point.  Even the supposed perma-bears of today run helterskelter, seeking profit and gain first in that, and then in this, with no long-living devotion to any belief.  Most current Bears do not care about fundamentals and history.  None seem to care whether or not they are playing in a AntLion hole from which they will never escape.  The greed of gaining the last drop of blood from the dying carcass of both bears and bulls is foremost on the heart of the young and younger.  No person not directly from a Great Depression family is prepared for what will come. That means that unless your parents where born no later than 1920, you cannot have any basis to form an understanding for the potential pain of a real collapse.  There are a few foreigners who understand, but I read nothing of what they may have to say.

‘They Won’t Let It Happen’

It can never happen…Bernanke will not let it happen…the Government is not going to . . .. they will take care of us…I’ll make so much in the crash it will not matter. . .  I’ll be OK.  Please add your own reassurance to the list, as there are many more excuses offered by temp-bearbulls.  The pessimist rarely makes the big killing in the stock market like a tempbull will.  Someone who experienced the Great Depression does not act like today’s tempbull.  There is one great difference between the Great Depression and today where The People are concerned.  Nearly everyone in 1920 knew how to take care of him or herself.  They knew meat came from a cow, and milk did not come from a bottle.  And yet today, the young cannot imagine a milk bottle delivered to the door by the milkman.  Nor have they ever imagined a family coming together to butcher a steer and can the meat because there was no freezer.

I see no imagination in the pages, blogs, and opinions written by financial wizards, or the wizard bulls who are smarter than a non-emotional chartist who knows the pendulum slows, stops, and slowly speeds up to strike down everything past dead center.  There is only one thing that cannot be taken from someone, and that is knowledge.  And even here, I have seen hypothermia take my mind, my strength, and my soul into a black pit of nothingness.  The majority of bulls and bears today have never experienced hypothermia. Nor have the wishy-washy bears seen $1 million on the books that they will never eat, that they cannot turn into warmth or food.

I guess that unless one has seen the valuelessness of gold while you shiver your way into darkness, there just isn’t a perspective to create a reality.  This is why I spoke of imagination and NASA as I wrote.  The generation born into the Sixties has not experienced loss in any form.  That generation is without understanding, or imagination to see through a mental filter created by pain and loss as past generations have.  The 1960s filter of democracy is a rosy filter of much, more, and always more.  Even in the annals of bear-market writers there exists temp-bearbulls looking to ride the next wave for an hour or a day.

Is it time for the Super Depression ? Probably, because the majority who have lived through that kind of pain are all dead and gone.  Will the greedy temp-bearbulls get trampled? Yes ! But not before they see the millions they’ve won by trading correctly fail to provide them with anything of value.  And what of us hard-currency nuts? You tell me!  But Steve, you say: there are so many suffering without jobs today.  True enough. But in 1934, there wasn’t any unemployment in the place where my dad pulled a crosscut saw for $1.00 pre thousand, part-time. (That’s about 50 cents a day, since there was someone on the other end of the saw).  There weren’t any government handouts in Sutherland, where the mill ran one day a week, or one day a month, and where the women rejoiced in their diary: “The men worked today!”  The more bears who think they are going to make a killing on the crash, the nearer we are to that crash.

I think Mr. Market is going to suck the blood out of nearly everyone — but especially from Bears who think Mr. Market is their friend in crushing the Bulls.  Imagine “Value” and imagine what value really is in its most basic sense.  I’d tell you what value is, but you either know, or will not listen to this ol’ radical gloom-and-doomer.