How Fed Rigs the Economic Debate

[Alan Geik, whose razor-edged essays on our sordid political culture have gained him a loyal following at Seeking Alpha and other popular web sites, has been a lifelong student of frauds and scams, and so writing about this Era of Bailouts comes naturally to him.  In the essay below (which contains some great links that we would encourage you to follow, including a video punch line at the end), he explains not only why the global financial crisis is not going away any time soon, but why it is likely to get much worse before it gets better.  To bolster his conclusions, Alan draws a bead on some of the bigger-than-life buffoons and greedy political hacks who have helped to amuse and entertain us even as they have unwittingly contributed to the collapse of the global economy. An egregious example of the breed is Fed. Governor Mishkin, who in 2006, with amazingly bad timing and lack of prescience, presented a paper entitled “Iceland’s Financial Stability.”  There are also some piquant notes on the recent misdoings of a world-class buffoon who needs no introduction, Sen. Christopher Dodd. Enjoy! RA]

Beginning with this somewhat worn animated video, Worst Slide Story, will hopefully lend a light, amused tone to my few observations about the iCorrosion of the Empire. Also, a bit of light comedy might lessen the appearance that this is just another frustrated Financial Collapse to Come rant. I have written several articles outlining the two major Wall Street conceived scams of the 1980s; the Latin American Debt Crisis and the S&L bailout. Back then lobbyists gave Congress hooks on which to support massive Wall Street loans to Latin American dictators (“we need to help third world economic development”) and also, to their own S&L campaign contributors (“we need to support small business.”) 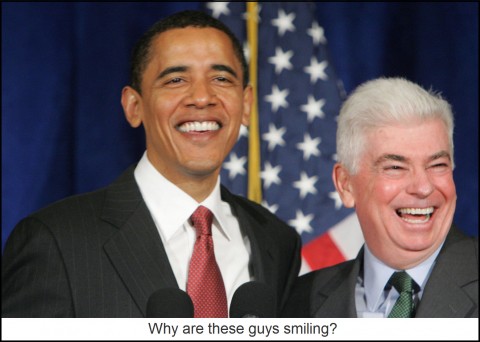 Of course all of the loans disappeared, and the banks claimed they had inadequate cash reserves, and, furthermore, if they didn’t get immediate government assistance (it’s always needed immediately!) they would fail and of course, “the economy would crash.” (The lobbyists didn’t invent this deceit just for the current money grab; they had worked it both times in the 80s.) Ironically, Fidel Castro and the conservative National Review were The Odd Couple among the few observers who consistently exposed the charade underlying those financial “crisis.”

In September 2008, Congressional leaders emerged from a meeting with then Secretary of the Treasury Paulson. “We need to do something now. We didn’t know“, they claimed, “that the economy was this bad.” Researching my last article, I was surprised to discover that about one-third of ALL members of Congress who voted in great haste for that Sept. 2008 $700 billion bank giveaway had also voted for the bank bailouts of the 80s and into the 90s (including the RTC funding, which when it finally ended its “mission,” couldn’t account for billions of dollars).

Presumably, Congress learned nothing in twenty years except how to extract more perks with each successful election campaign. So here, as in my last article, are still more reasons why we are in a Death Spiral — reasons other than the mathematical impossibility of ever paying off the national debt, which will lead ultimately to default, or crushing inflation. They instead suggest a pervasive decay of oversight by every elected official, few of whom can now withstand the demands of reelection without corporate support.

“….150 economists support the Federal Reserve’s recent (you name it) action…” You’ve seen these banners many times streaming under the CNBC on-camera blatherers. Of course, the question is always asked in the post mortem; how did so many economists get it so wrong…so many times? The answer is simple: The Federal Reserve Bank thoroughly controls the field of monetary economics. They have raised the academic imperative of “publish or perish” to “disagree at your own risk.”

Fed Is the Only Filter

Large corporations do compete amongst themselves to have their fingerprints all over the content in the academic and trade journals of their industry. However, in the world of monetary economics there is only one filter through which submitting writers have to pass:  the Federal Reserve bureaucracy, who long ago salted the boards of every journal with their loyal followers. But the Fed stranglehold is far more pervasive than just controlling journals. They have created a sprawling company town of economists by allocating  $$ millions for meetings, consultancy fees, hiring hundreds of on-and-off staff PhDs, all with the overt or unintended consequence of widespread academic assent for the political decisions made at the top of the Fed pyramid.

Must reading is an article from the Huffington Post: Priceless: How the Federal Reserve Bought the Economics Profession. A reasonable conclusion is that once inside the company town commissary so to speak, the benefits of supporting the widely reported positions of those higher up the chain are clearly visible. And no doubt many have watched their more savvy colleagues rise toward the top of the pyramid, and witnessed the greater rewards waiting at each succeeding level. Sure, this speaks to the mindset of the modern corporation, not just of the Fed. However, I don’t see any great impact on my grandson’s future lifestyle from corporate infighting at Microsoft over the launching of still another unnecessary upgrade, or at Mattel, over Barbie’s new image.

But we are talking about the Fed whose actions will have a profound affect over our lives in the next few years. It is dispiriting that, despite whatever positions papers are generated and conferences attended, the Fed direction will ultimately be set by the most short-term of political considerations. So the question, one of many, arises: Why don’t the CNBC compliance people require these economists to fess up to how much into the Federal Reserve dole they are, along with their consulting companies, and universities? Why should it be assumed that their acknowledgements that “Chairman Bernanke has done a masterful job at……..” do not carry a price tag with them?

The poster boy for this fetid culture must be Frederick Mishkin, who parlayed his rise to Fed governor into a job as a well-paid spokesperson for private industry. The most recent revelation, which was mentioned by several bloggers, including Michael Shedlock’s popular Mish’s Global Economic Trend Analysis, is that Governor (I supposed that is what they call themselves) Mishkin received an at-the-time, unreported $140,000 to stamp his name onto a 2006 paper “Iceland’s Financial Stability.”

For those that who didn’t follow the trajectory of Iceland’s economy, less than two years after Mishkin’s “study,” the economy crashed when it was publicized that the three leading banks could not refinance their short-term debt, quickly leading to a run on their deposits in Europe. The consequences were devastating for every Icelandic citizen. Ultimately the banks campaigned to have the taxpayers make good for them (sound familiar?) The voters in a referendum overwhelmingly rejected the banks’ suggestion for resolution of the matter. However, as is often the case, the people of Iceland are paying dearly.

Needless to say, Mishkin’s under-the-table payment came from the banks: money sanitized by the appearance that the Icelandic Chamber of Commerce commissioned the study. Mishkin’s report went a long way to counter significant international concern that cracks as massive as those in their globally warmed glaciers were growing in the Icelandic banking system, and posed a serious threat to the stability of the economy.

Mishkin, while Fed Governor, also wrote lengthy views favorable to the largest U.S. banks and argued against the existence of a housing crisis, well into its unfolding. One can conclude — I certainly do — that the disastrous Iceland “study” was not his only unreported fee from the many special interests circling the Fed.

And how can we discuss these matters without checking in on my favorite waste of space in Congress, Sen. Christopher Dodd? (Granted, there are so many, but his particular buffoonery provides me with great amusement.) It was he who warned that a decision to nominate Harvard law professor Elizabeth Warren to head a new consumer agency could produce a protracted confirmation fight.  Sen. Dodd is my favorite congressional dolt, totally befuddled by the enormity of the systemic meltdown while still loyally supporting anyone who has given him a few point edge on a home mortgage. In my last article I pointed out that he claimed that he “wanted to revamp the credit card industry,” but “they didn’t want to.”  So he didn’t!!! My kind of field general.

It appears that some Republicans and “industry representatives” were against the Warren nomination, so Sen. Dolt folded his hands, shrugged his shoulders and advised another choice. The bankers couldn’t have invented a more perk-laden stooge than this guy. Even worse, of course, is that there is nobody to succeed him who will not be lining up for their own turn at the trough while Main Street burns.

Let’s end, as we began, on a lighter note:  Click here for an amusing take on some white-collar gringos desperate for work.