Another ‘Camouflage’ Trade, This Time in Silver…

We’ve been known to keep odd hours, which, depending on the circumstances, can be good or bad when attempting to earn one’s daily bread trading. Sometimes it seems as though the best opportunities — meaning the ones that produce quick and easy gains with relatively little stress – occur in the dead of night. At other times, especially in the first hour or so after the opening bell, the low-hanging fruit positively beckons those who are able to stay cool while most other traders, too scared to act, are waiting for the dust to settle. We love it when the action is heated – wild, even — since this tends to drive most other traders to the sidelines. Let them sit on their thumbs, as far as we’re concerned – it just means easier pickings for us.  When things get moving, the Hidden Pivot Method that we use to trade and forecast is especially good at identifying the “filet” of uptrends and downtrends. As such, the terms bullish or bearish apply only to the extent that the “impulse legs” that drive these trends are headed higher, or lower, in a given time frame. 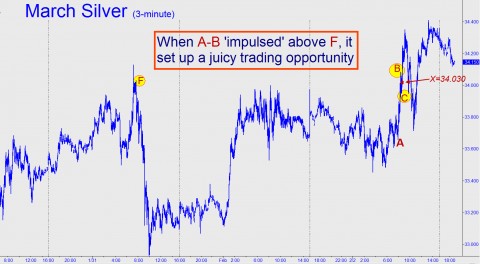 A Silver trade that we put out to subscribers Wednesday night implictly required them to pay close attention to impulse legs on the very lesser charts. Here’s what we advised (and keep in mind that although the jargon is technical, it is geared to the many hundreds of subscribers who have taken the Hidden Pivot Course):  “March Silver appears to be building thrust for a shot at 35.535, the ‘D’ target of the pattern shown in the thumbnail mini-inset.  The 34.235 midpoint resistance that would need to be surpassed first is above Tuesday’s spike high, so we’ll  need to make our move below that level, camouflage-style, if we’re going to get aboard with a minimum of stress. For that purpose, I suggest leveraging a B-C pullback from just above the obscure, look-to-the-left peak at 34.030 shown in the larger chart.  The ‘X’ entry trigger could come up quickly, so a state of nimble alertness may be the key to getting executed.”

The recommendation is much easier to understand if you look at the chart. What it boils down to is that a small pullback from just above the obscure peak ‘F’ had the potential to set up a juicy buying opportunity. This is exactly what occurred yesterday morning, and the relevant retracement is labeled B-C. A four-contract trade initiated at the subsequent buy signal (aka ‘X’) could have been worth as much as $3100 for about 72 minutes of work. After the trade triggered, we established a “tracking position” to follow it to completion, since a subscriber in the Rick’s Picks chat room reported having done the trade. We advised exiting the last piece of it on the swoon to J, but by then we were looking for a way to catch the next leg up – to the 35.535 target mentioned above.  That’s a “Hidden Pivot” resistance, as well as our minimum upside objective for the near term. If you’d like to learn more about our proprietary trading system and the Hidden Pivot Method, try a free trial subscription.