[Gary Leibowitz frequently raises hackles in the Rick’s Picks forum with his mantra that business is great, stocks are underpriced, and — at least for the time being — the U.S. economy is going great guns.  Who knew that he is also expecting a global depression that will last for more than a decade?  In the guest commentary below, he explains why – but also why, with two caveats, gold is likely to be  one of the best places for investors to be for at least the next six years. RA]

I must confess that I’d been a gold bear for many years. When I reevaluated my position, I surprised myself when my conclusions made a 180-degree turn. On average gold has an 18-to-20-year life cycle, which implies the bull run will run until 2018-20. The cycle doesn’t necessarily mean a huge run-up, but it does mean there should be very little downward pressure. The other factor that is encouraging is how most gold cycles, when there are strong signs of upward movement, terminate with an even larger and steeper rise near the end of the cycle. If history is a guide, we should therefore expect the most dramatic phase of the rally to occur six to eight years from now. 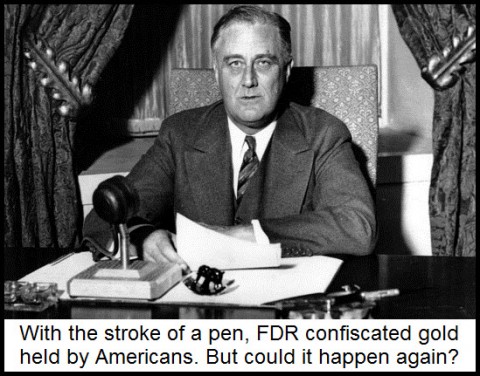 My longstanding macro view has been that as debt became unsustainable, a severe deflation period would ensue. That argument still holds.  However, I did make some unsubstantiated assumptions that because of the severity of this debt cycle, the deflation cycle would be deep and long. As it turns out, that has never been the case. On average deflation has an 18-month window. It is during times of strong contraction that cash outshines all other investments. I also believe that gold will experience a downturn as well, but not as steep as most other assets, and that it should recover quickly as governments re-inflate their economies.

Pondering future scenarios, it seems likely to me that gold will be one of the best investment vehicles. However, there are two scenarios that could be disheartening to gold owners. One has to do with confiscation, or placing government restrictions on ownership or price. If you are inclined to believe this worse case, I would suggest you hold your gold investments overseas in the most stable of countries. In the end, though, if you invest early enough, with the price of gold below $3000, there is little chance of  losing. The second scenario will not fare as well. If we have total collapse of world economies gold might not be an easily bartered commodity. Barring that last scenario, gold should be the top investment choice till 2020.

More immediately, perhaps next year, I expect major defaults to play out that will go unremedied by world banks and governments that are either disinclined to step in or unable to do so. All lenders will quickly retrench, just like the banks did four years ago. This time, however, would-be rescuers will make clear that there will be no safety-net and no subsidy for interest or principle. New government rules will be enacted in an attempt to stabilize the financial system. Real write-offs will be placed on ledgers; no more issuing of bonds and government bailouts. No winners, whether lender or borrower. A forced period of across-the-board austerity will be put in place. For the masses, there will be a global depression that will last for more than a decade. For the economies of the world, it will be much briefer. Businesses will quickly do what they have to do to survive and then thrive. Just as nearly everyone has been flabbergasted by the way corporations have sustained strong earnings over the last four years, they will underestimate the ability of companies to adapt in a more severe economic downturn.

The reason gold has not already taken off has to do with a human psychological trait that clings to the notion that everything will be as it was. It’s called the normalcy trait, and it makes it hard for us to acknowledge that drastic, unwelcome change can occur. This of course assumes you have lived in a stable environment all your life. That was why Jews clung to the notion that Hitler’s regime would be short-lived, and that its citizens would not attack one another. While most can understand the logical conclusion to this debt crisis, we still cling to the notion that somehow it will end without much change in our lives. We can see the datapoints and the almost irrevocable conclusion, but somehow manage to skirt reality and accept that our lives will continue in the “normal” way they always have.

Then again, perhaps my slanted, cynical outlook on life has overdramatized the possible scenarios that lie ahead.  I surely hope so, but just to be safe I will be hedging my bet with gold.