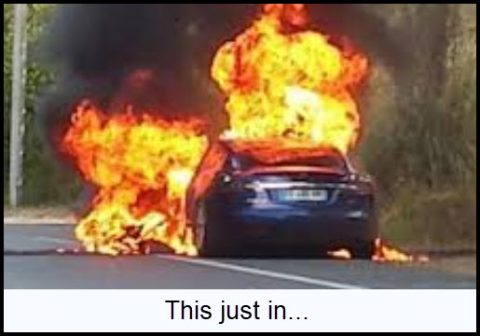 Wall Street firms often “talk their book” in order to front-run their own customers. You can bet that if a big-time investment house is out on the tape with a bullish forecast for a loser like, say, Uber, they mean to unload the stock, not buy it. An upbeat report from an influential analyst will typically cause shares to rise, at least for a short while, giving the firm an opportunity to dump its position into a flurry of buying by the usual lamb chops. There are other ways to rig the game that can be even more lucrative for the perps. One of them involves planting “news” in order to extract riskless profits from the option markets. In one example, ‘conversions’ and ‘reversals’ can be used to generate very substantial interest income with someone else’s money. Employing reversals, a firm would short, say, 100,000 shares of AMZN for $1,750 apiece while simultaneously shorting a thousand puts at the 1750 strike and buying a thousand 1750 calls. No matter how much the stock moves, the relationship between the three sides of this position will remain fixed. The point of doing it in the first place is that the seller can park the $175 million in proceeds from the short sale in Treasury paper.

How the Sting Works

There is a temptation for unscrupulous firms to rig the price of these already-riskless trades even more heavily in their favor by deftly manipulating the news. For instance, a well-timed headline accompanied by a photo of a Tesla in flames could reliably be expected to push the price of TSLA stock and call options significantly lower for a short period. This would give the hedge fund an opportunity to leg into a truckload of reverse conversions at an unbeatable price by following these steps: 1)  short 100,000 shares of stock; 2) call your favorite reporter moments later to tell him there’s a Tesla with an apparent battery problem spitting flames near exit 99 on the Garden State Parkway. (Note: The fire may have occurred a day or two earlier, but this is seldom a concern to reporters these days, since most of them are too lazy to let such details get in the way of a seeming scoop);  3) when the story and photo hit the tape, sell a thousand put options short as their price spikes on the news; and 4) simultaneously buy a thousand calls at fire-sale prices. The net effect of this quasi-criminal hat-trick is to significantly boost the risk-free interest income from the short stock. As implied above, this can add up to very large sums. Set aside some of it to pay a fat bounty to the next tipster who sends you a photo of a flaming Tesla. Rinse and repeat.

As you might have guessed, flaming-Tesla stories became so common that the ruse ceased to work, forcing DaBoyz to find a new way to fleece the rubes. A favorite scam these days is to front-run earnings news that either meet expectations, matches them or falls short. This is somewhat riskier than waiting for a Tesla to go up in flames, since a stock’s reaction to earnings news, whether it is good, bad, horrible or fabulous, is notoriously unpredictable.

Speaking of talking one’s book, the world’s largest hedge fund reportedly has wagered $1.5 billion that the stock market will fall sharply between now and March.  Call it an Elizabeth Warren put. What amuses about this tactic is that Bridgewater Associates’ founder, Ray Dalio, instead of hyping his bet, is saying that it was just business as usual and that the firm’s overall position is not bearish. Yeah, sure.  He can make this claim because the huge quantity of put options Bridgewater owns are probably well out-of-the money.  As such, they are a negligible offset to the fund’s gigantic exposure in stocks. But if shares fall sharply and the puts go in-the-money, their ‘delta value’ will increase commensurately, making the bearish bet much more consequential relative to Bridgewater’s overall portfolio.  For now, Dalio is pretending that it’s no big deal, perhaps because he doesn’t want to jinx the bet, but also because it’s impossible to talk down the market no matter how big you are. But business as usual it ain’t. Sniffing the same potential disaster that is making us all edgy these days, he has made an unusually large wager that should not escape our attention.