I thought I’d overdosed on the inflation vs. deflation debate, but that was before I started reading Adam Fergusson’s When Money Dies: The Nightmare of the Weimar Collapse. Fascinating stuff. Anyone who thinks it couldn’t happen here is right in one respect: It won’t take ten years to play out in the U.S., as it did in Germany.  Far from it. My guess is that our own hyperinflation nightmare – and we will have one once deflation has had its way with all who borrowed more than they can ever pay back — will be over within ten days of the initial panic. Then it will be back to deflation for another 20-30 years. 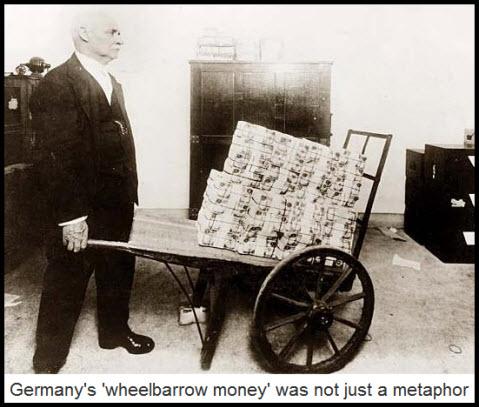 Are you ready for it? Investors shouldn’t kid themselves about being able to avoid all the whipsaws. Just when you’re patting yourself on the back for scoring some ingots for $2000 an ounce after bullion has shot up to $5000 in mere days, quotes could plummet back down to $2000 in a blink. That would hardly be a catastrophe for long-term bulls who have been accumulating the stuff since it was $300 an ounce. But what about the guy who bet the ranch at $5000, thinking he’d get $10,000 from some greater fool a week later?  Which raises another tricky question:  When you sell your gold, what do you accept as payment?  Do you risk taking dollars whose purchasing power could fall by half overnight, as the German mark did?

Fergusson’s book makes clear that there were few winners and almost no big winners. Farmers made out pretty well, of course, because a potato was a potato no matter how many marks it took to buy one.  In fact, some who borrowed heavily to buy farms when hyperinflation took off in 1922 were able to retire their mortgages with proceeds from the first harvest.  A speculator these days could mimic that strategy by buying a bunch of wheat contracts when it appeared that the dollar was in imminent danger of collapse. Trouble is, the dollar could collapse tomorrow. Would you make out like a bandit if it did?  And:  If you have $50,000 sitting in a trading account for when the panic hits, how can you be sure the CFTC won’t raise margin requirements so steeply that the only players who can afford the game are Cargill and ConAgra?

I strongly recommend Fergusson’s book, the complete text of which you can access by clicking here.  Once you’ve read it, please visit the forum at Rick’s Picks, where we are having a thought-provoking discussion about the inflation/deflation conundrum.

Do You Trade the E-Minis?

Drop by during trading hours Thursday for some real-time action using the Hidden Pivot Method. Rick will be closely monitoring the E-Minis in particularly, calling trades from 9:15 a.m. until the closing bell.  This will be an informal session, and you’re invited to come in and look over Rick’s shoulder at any time during the day. Seats are going fast, so register now by clicking here.