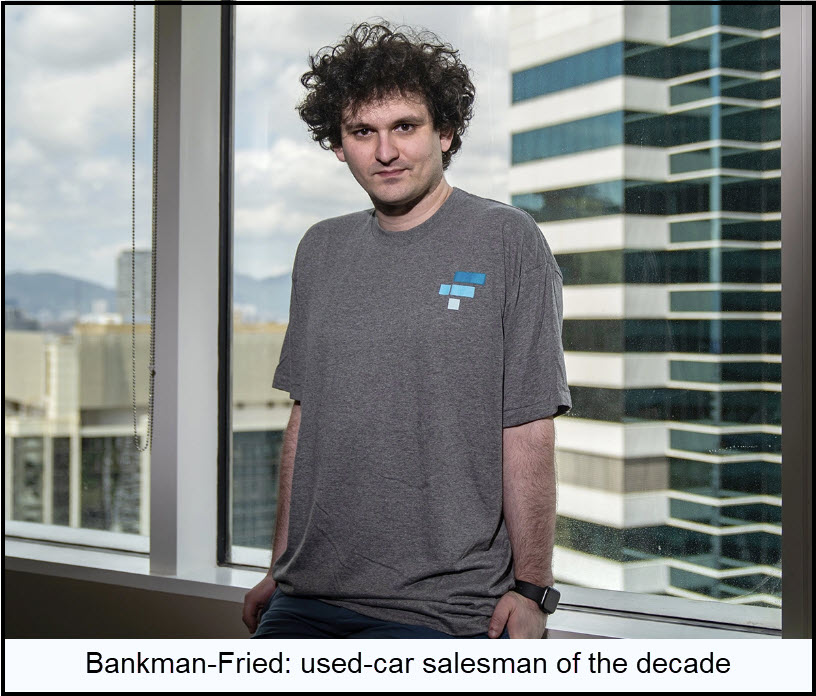 Twitter and bitcoin share a key similarity in that their success while it lasted was just hubris. Realize that both were birthed by a virtual medium capable of monetizing turds if there is any discoverable demand for them. Cardi B’s megahit single Wet Ass Pussy was proof of this. Twitter proffered turds in the form of members-only censorship that took delight in defecating on the Bill of Rights, particularly the First Amendment. But it took Elon Musk, with unlimited quantities of f**k-you money, to put a number on Twitter: $44 billion. Unfortunately for him, nearly all of it was for ‘good will’ that appears to have vanished. Nor is he likely to be consoled when it is discovered that the dark secret of Twitter’s overwrought ex-employees is that they can start a Twitter of their own with just a few mill, a rackful of servers and a dozen high school dropouts working from home, paid $20/hour to code.

So what are the notoriously spoiled workers so disgruntled about? Leave it to an apparent millennial sympathizer reporting for The Wall Street Journal to excuse them with a high-minded quote uttered by no one in particular: “Employees said Mr. Musk pushed people to work well over 40 hours a week, but said they didn’t feel there was a compelling vision to justify it.” A compelling vision? Yeah, sure.  And exactly what lofty end did they see themselves serving under Jack Dorsey, Orwell’s darkest nightmare masquerading as a little blue birdie? Stay tuned to the blogosphere for more dithering on this and other topics of scant interest to folks who live in the real world. What should please the company’s make-believe workforce in any event is that Musk set an intergalactic record for overpayment.  If Twitter had changed hands for, say, a still-hugely-overvalued $40 million, no one would have given a rat’s ass what his plans are for the company.

Which brings us to bitcoin, another hubris-rocket fueled by insane excesses of speculative money and greed. Its sensational rise was based on a sexy story invented by, for all we know, a Hollywood flack: Bitcoin entered the space-time continuum via an algorithm written by a mysterious nerd-cum-rock-star known as ‘Satoshi Nakamoto’. His secret sauce was scarcity: there will never be more than 21 million bitcoin in circulation. An irony is that satoshi coinage inspired more than 2,000 cryptocurrency knockoffs, practically all of them rendered worthless by bitcoin’s nearly 80% plunge.

When the bitcoin craze broke into a gallop in 2021 spurred by salacious tales of teen millionaires, it was on its way to becoming the Tulip-o-mania of this era, albeit on a global scale. The Murphy men who run our banking system cautiously signed on (even if Warren Buffett suspiciously did not), warming up the press and the rabble with luncheon speeches that lent bitcoin a veneer of respectability. No one seems to have noticed or cared that the banks themselves appeared to have no skin in the game. Their huckstering was meant to get bitcoin off the launching pad and solidly established in the firmament of Ponzis and shingles-and-siding hustles. Then, the supposedly smart money would rendezvous with the crypto mother-ship they’d helped create.

Alas, bitcoin’s pitch-men will have to start nearly from scratch now that the second-largest bitcoin exchange, FTX, has gone belly up in a scandal that is certain to widen. Its founder, Sam Bankman-Fried, has gone from patron saint and second-largest Democrat donor to schmuck in less than two weeks. You can bet that he will resurface a few years from now, claiming to have solved the nation’s energy problems with cold fusion. By that time, bitcoin will have bounced its way down to zero, where all speculative manias eventually come to rest.

You don’t need to be chartist to see that Apple is not about to go quietly into the night. Since the beginning of the year, every worrisome selloff has been answered by a rally of nearly equal breadth. The stock’s long list of sponsors includes virtually every giant investment fund on the planet, many of them sovereign funds with no foreseeable need for quick cash.  It is predictable that they will support the stock for as long as possible, presumably until they are overwhelmed by redemptions by individual investors grown mortally fearful of plummeting iPhone sales. That could only occur in the throes of a deep and prolonged global economic downturn, and even then over a months-long period of disillusionment.  Rather than proffer a chart for trading purposes this week, the inset shows a channel that could define the limits of the stock’s ups and downs in 2023.  However, odds would tilt toward a breakout above the upper channel line if the current rally, begun from 134 two weeks ago, surpasses September 12’s  164.26 high without correcting to the lower line that currently comes in at around $123.

Last week’s so-so bounce offered scant respite from the hard selling that has hammered the dollar since late September. Hidden Pivot levels aside, the Dollar Index looked sufficiently winded when last week ended to give us reason to expect more selling down into the void circled in the chart.  It is bracketed by two lows at, respectively, 104.64 and 101.30. Although I doubt the second will be breached by this long-overdue, hard correction, I wouldn’t bet the first will hold.

I discontinued coverage of bitcoin a while back because its slow death had become too boring to watch. The grim reaper picked up the pace this week, however, spooking this bitcoin proxy into its biggest two-day plunge since June. If Bertie finds no support at the secondary pivot (p2=15,382), you can assume it’s headed down to the ‘D’ target of the pattern, 12,108. The ABCD here looks too obvious to deliver bounces precisely from those two Hidden Pivot supports, but don’t be surprised if the chimps who control it try to engineer a last-ditch reversal from midway between p2 and D. They’ve been overdoing the same oh-so-clever trick to death in many trading vehicles, methodically avoiding heavily trafficked Fibonacci levels. That is why you should look for the turn near 13,745 if p2 is breached decisively. That would not negate an eventual move down to D=12,108, only delay its coming. _______ UPDATE (Nov 10, 6:52 p.m.): Bertie has bounced tentatively from within 1.4% of the ‘secondary pivot’ at 15,382 noted above. The rally would need to surpass the September 13 peak at 22,761 to suggest it’s capable of closing decisively above the psychologically important 25,000 mark. ______ UPDATE (Nov 25): Bitcoin bag holders know they’re in over their heads, and that’s why they have been waiting with increasing desperation for an opportunity to goose this cinder block into a nasty short-squeeze. So far, though, even when the stock market has spasmed into one of its doomed flights of fancy, the cryptos have disappointed. Too many investors want out, including even major-leaguers who continue to talk their book. The only thing they’ve got going for them at the moment is a stubborn Hidden Pivot support at 15362 that has supported three weak bounces since first being nearly touched on November 9.