For spin-free analysis of the global economy, the Australia-based  The Privateer is one of our favorite reads. Amidst a cacophony of hubris and unwarranted optimism, its editor, William Buckler, provides a fact-filled perspective that reduces the mainstream media’s reports of “recovery” to drivel. Buckler notes drily that “the signs that the party is indeed almost over are all around us and becoming very difficult to ignore.”  The same goes for the U.S. dollar. When Nixon cut off foreign holders from redeeming dollars for gold in 1971, says Buckler, the U.S. initiated a reckless global experiment with fiat paper. “Forty years later, the bill for this adventure has come due,” he warns, “and there is nobody to pay for it.” 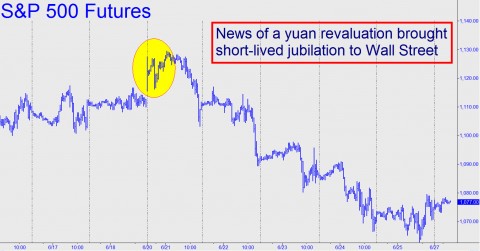 Like Rick’s Picks, The Privateer regularly finds something to amuse in mainstream-news headlines on the topic of the economy. Here’s one that caught his eye — and ours as well: “China Makes Good on Flexibility Vow – Yuan Falls”. As if any of the central banks actually support flexible markets. If it had been Hitler’s invasion of Poland that was being reported, the headline might have read, “Hitler Makes Good on Vow to Seek More Room for Germany”.

Recall that U.S. stocks got barely any lift from the news.  Abetted by short sellers caught on the ropes last Sunday night, DaBoyz and their pigeons were able to pretend for only a few hours that China’s decision to let the yuan rise was good news. Stocks all around the world rallied sharply if fleetingly, but by Monday morning most traders seem to have figured out that a pricier yen would subject global financial markets, particularly the U.S. dollar, to killing stress. The Dow Industrials fell steadily for the rest of the week, failing to attract even one decent short-squeeze rally the whole way down.  Ominous.

And here’s why: Imagine everything the U.S. and the rest of the world buys from China costing more. Then imagine China’s exports falling as a consequence, leaving the country with far fewer dollars to buy U.S. Treasury debt. Well, it is no longer something that needs to be imagined, for that is exactly what China intends. With the nation’s foreign currency reserves edging toward $3 trillion, most of that in U.S. dollars, it was time for China put an end to a greenback-support operation that had long since grown beyond the bounds of sanity.  That is not to say, however, that Chinese support for the dollar has outgrown its usefulness, for the arrangement has given the U.S. Treasury the appearance of solvency, freeing up easy credit for U.S. consumers with an insatiable hunger for Chinese goods.

All of that is about to change, though, and with it the status of the dollar as the world’s reserve currency.  We find it remarkable under the circumstances that, a week after China’s decision, the dollar has yet to implode — nor Gold to erupt, presumably with sufficient force to leave the $1300 threshold behind in a cloud of dust. It is difficult to think that both of these things will not occur, although it may take a shift in the sheep-like behavior of money managers, since they are deeply conditioned to believe that the dollar and Treasury paper are “safe havens” even though a U.S. without recourse to printing-press money would look far worse than that supposed financial basket case, Greece.

With both Europe and Japan abandoning deficit spending as means of spurring their moribund economies, the U.S. dollar can only fall, and gold rise, as the former confronts a perfect storm of tough comparisons and bad tidings.  This will happen even with the support of a dying coterie of money managers who may pretend for yet a little while longer that black is white and that 1 + 1 = 3.  It is predictable that they will all have their epiphany at once. When that day arrives, investors who are hedged with gold will be able to ponder the consequences with serene detachment.