Why Gold and Silver May Have Bottomed

[Have Gold and Silver seen their lows for this correction? Were encouraged to think so, for two reasons. First, downtrends in both Comex June Gold and July Silver reversed on Tuesday from precisely where they should have if the long-term uptrend is to be judged healthy. Second, our astute friend and mining stock consultant Chuck Cohen, who turned cautious on bullion just before the correction began, thinks the selling may have run its course.  In the guest commentary below, he explains why. RA]

Like Freddy Krueger, it’s back. The infallible New York Times contrary indicator has returned for another testing. If you remember last August at the market bottom, amidst the palpable gloom on Wall Street, the Times was moved to interview superbear Bob Prechter on the dire market situation, not coincidentally within a week of the bottom. At the time, I mentioned the Times contrarian indicator in a lengthy essay published at LeMetropole Café, 22 Things to Look for When Gold Finally Makes Its Top.

For some amazing coincidence, since the Times rarely takes sides at the markets, when it does it is usually right on the money — on the wrong side. Lo, last Sunday, one of the Times‘ savvy financial reporters wrote about the seemingly endless gold bubble and the danger of getting caught in it. Read it and see what I mean. In particular, note the clear logic that gold has had a major correction of 4% after doubling from its bottom in 2008. The size of the correction is definitely proof that what goes up must always come down — except for the thousands of positive articles the Times put out on housing through the mania several years ago. 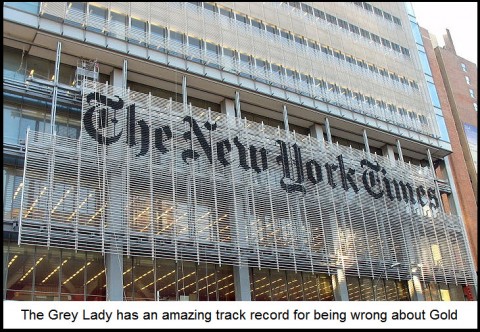 If the Times barometer continues to hold, we should be ready for something very special for the anxious gold community. For the first time in months, my own reticence has receded and I believe we are at, or nearly at, another terrific buying point for the gold shares. You know I have been cautious for several months especially as the spike of silver was in full bloom, and as the bank stocks continued to deeply underperform the markets, both definite warning signals. But with the drop in silver, gold and other commodities as the dollar rallied, the speculative air has seeped out of these markets. And it feels good to be positive again. Whether or not this will be the start of THE move in the shares, I don’t know, as it has appeared to be so on other occasions, only to result in disappointments.

When to Bail Out…

You can be certain that a major top in gold will not come until the Times has a major interview with a true gold bull like Jim Sinclair or Turk as it did back in May 2005, at the top or when you have a major front page article with a large price chart of the yellow metal.

But besides the Times article I have some other strong reasons for believing the worst is over. In brief, here are some of them:

1. The sharp drop in sentiment in silver and in the Hulbert Gold survey, which fell from 74 to 7 in 4 days. Who says gold buyers don’t panic?

2. The heavy volume and gaps in the HUI shares over the past 10 days. Interestingly, this week the shares are beginning to outperform the metal.

3. The incredibly low level of the Rydex Precious Metals Assets–now back to the point in 2008 when gold was almost 50% lower.

4. The bold, confident talk of the end of the commodity bubbles in the media.

5. The mushrooming number of correction callers in Kitco.

6. The report that George Soros has sold out his gold (apparently about $100 lower.) George Soros is no Jim Sinclair when it come to gold. He was a nouveau bull.

My chief point is that if you have been in cash anticipating a decline in the shares, now is the time to start to nibble or even buy on weakness. Once a bottom occurs, many of the smaller companies could scoot up 50% before you can ever get in. It is uncomfortable to buy stocks only to see them fall more, but it is also wiser to buy on weakness when many of the signs are turning so positive. I’m here for some suggestions and help.

Do you want up-to-the-minute technical analysis and forecasts for your favorite stocks, commodities, ETFs? Join our Take Request Session on July 7th!