[In the guest commentary below, Rick’s Picks forum regular John Skerencak (aka ‘John Jay’) sounds a note of deep despair as we wait for the other shoe to drop, economically speaking. There are no white knights about to ride to the rescue, nor could our corrupt, entrenched political system even implement a good idea if one were up for discussion.  The best we can do, says John, is to hope that Japan and Europe flame out before we do.  RA]

Resolved:  Nothing is going to change, so let’s pray that Europe and Japan crash before we do. Will the existing political system change things? No, it will not.  The entire process is corrupt beyond redemption.  Just look at the slate of cartoon-like characters offered by the Republicans — excepting Ron Paul, who is already invisible to the mainstream media. Will the States rise up and confront the Federal Government?

No, they won’t.  Various state governors have their pet complaints — immigration, gun control, national IDs, etcetera — but they all want the Federal money. As much of it as they can get. Even Texas Rick Perry seems to have balanced his budget with Federal stimulus money. Will outraged citizens call a Constitutional convention? No, they won’t.  Anyone who has read Kurt Vonnegut’s Slaughterhouse Five knows why. Americans all want to be the boss and will criticize any potential leader to death. Remember Ross Perot and Pat Buchanan? 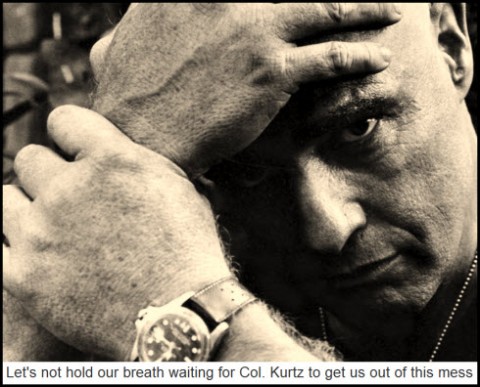 Will Col. Kurtz stage a military coup? No, he will not.  Ah, my favorite dream:  Col. Kurtz and an elite force of heavily armed, outraged, active-duty military Patriots descend on the next State of the Union Address to bring the traitors to justice.  In reality anyone above the rank of captain has been thoroughly vetted and is only interested in promotions, outstanding performance reviews and not rocking the boat.  The higher up you go, the more this is true.

When Law and Order Fail

I think that covers all the bases. The downward trend in this country will continue due to that old law of physics:  A body in motion will continue in motion unless acted upon by an outside force.  I don’t see any outside forces on the horizon.  So let’s all feather our nests and pray that Europe and Japan fall apart before we do.  Because what will happen in this country after a currency collapse will be a lot worse than what we have to contend with now.  Recently, burglars broke into an East West bank branch close to me in Rowland Heights and cleaned out the safe deposit boxes.  Just imagine if law and order really break down. Below are three interesting links that showcase the decline.

They treat government spending and waste, oil imports and the trade deficit.  At the bottom of that first link, read Nowhere to Cut? If that is all you read on the page, it never ends and only gets worse. Nice to know Dennis Hastert is still getting $40k a month expenses paid by taxpayers for being a lobbyist.