Gold came down hard for a second straight day yesterday, but for all the wrong reasons. That’s why Rick’s Picks subscribers were ready to seize the opportunity with distress bids in two popular gold mining vehicles. One of them, GDX, the Gold Miners ETF, fell to within 14 cents of a 46.15 target that had been disseminated to subscribers a month ago when the price was in the high $50s.  So far, the recommendation is looking like a winner: by day’s end, with GDX settled at 46.71, the paper position was 68 cents in-the-black. The other recommendation involved GDXJ, an ETF comprised of smaller mining companies. This vehicle plummeted yesterday to a 22.74 target that had been promoted to our subscribers as a “back-up-the-truck” number when the stock was trading closer to $25. And although GDXJ fell yesterday a bit lower than we’d forecast, hitting 22.39 intraday, the bounce into day’s end brought it back to a high of 22.85 and a settlement just two cents below that.  Give it a little rest overnight, and we expect GDXJ to bolt from the gate on Thursday, the last trading day of this holiday-shortened week. Even so, we’ve instructed traders to place protective stops not far below where they got long in order to minimize exposure if GDX and GDXJ relapse to new lows. [Want to get in on our next trade via a real-time e-mail alert? Click here for a free trial subscription to Rick’s Picks that will give you that and much more, including access to our 24/7 chat rooms.] 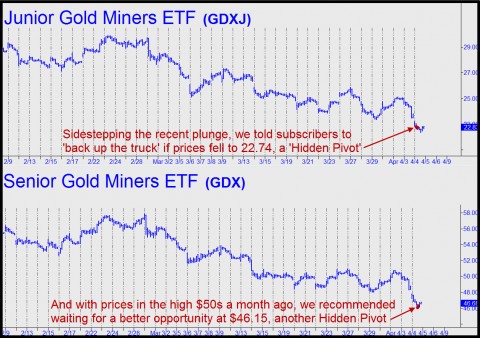 So what about our assertion that bullion and mining shares fell for all of the wrong reasons? The selloff began on Tuesday when minutes from the last Fed meeting were released. Apparently, the minutes contained no explicit word that the Fed would countenance more easing. This supposedly disappointed traders, who reacted by selling stocks, particularly shares tied to precious metals and energy. However, traders needn’t have feared that the Fed has become less accommodating, That is simply the story that the clueless idiots who bring us the news each day have put out because even the very brightest of them is apparently incapable of deviating from the conventional narrative. In fact, far from backing off the throttle, the Fed has been pedal-to-the-metal for most of the last decade, pushing credit growth into a parabola that only Wall Street’s best and brightest and the nincompoops in the newsrooms could have missed. They also seem to have missed the datum, widely circulated last week, that the Fed turns out to have bought 61 percent of all Treasury paper sold at auction in 2011. If that’s not QE3 enough to satisfy Wall Street, then perhaps it’s time for Helicopter Ben to live up to his nickname.

In the meantime, we’ll continue to take the odds as bullion prices fall. And why not, assuming we can continue to buy at Hidden Pivot targets, and to exit trades gone awry quickly, the better to try again later at a better price?  The forces that have been driving gold and silver higher for more than a decade remain firmly in place, as far as we can tell. Under the circumstances, we prefer to treat the nasty price breaks that have occurred in bullion from time to time as buying opportunities – shakedowns engineered to benefit deep-pocketed buyers at the expense of panicky sellers who evidently believe what they hear on the evening news.