Is Platinum Warning Once Again of a Stock Market Crash?

[‘Farmer’ posted the comments below in the Ricks’ Picks forum on Friday, but I am emailing them to all subscribers because his point — that the steep drop in platinum may be warning of a stock market collapse — deserves a wider audience. Farmer has made some prescient calls in the past. He is also the first person from whom I learned, years ago, that pesticides contained neurotoxins that were killing off the world’s honey bee population. His ‘platinum indicator’ could have bearish implications for gold as well, since price action in the former often leads the latter. In this case, platinum’s 22.5% plunge since mid-August has more than doubled gold’s 9.5% drop. This is shown in the charts below. For the record, Rick’s Picks‘ outlook for gold recently turned cautious due to the hard selling that has occurred so far in October. I haven’t given up on the idea that the powerful rally in precious metals begun early in 2016 is the nascent stage of a bull market that will run for years. However, technically speaking, the yellow flag is out, and I am no longer recommending bottom-fishing in mining stocks at this time. The sector looks vulnerable to a further correction on top of the 30% decline that has already occurred. RA]

I just have to say something about platinum here, particularly as it relates to stock market corrections. The reason I bring this up is because of the steep losses platinum has recorded recently relative to other precious metals. Does everyone remember the steep dive platinum began in May 2008? The world’s stock markets had just begun to roll over when platinum suddenly went into a death spiral, dropping by nearly $1500 over the next five months, from $2234 to  $752. Well, platinum is a tight little market, dominated primarily by professional traders. And unlike gold, which attracts a fairly wide audience of retail buyers, many of them emotionally bound to the yellow metal, those who trade platinum are, by and large, more disciplined. Since it is purely informed speculation and technical forces that move platinum, that is why the metal’s ups and downs deserve close scrutiny. With regard to the stock market, the platinum crowd is better attuned to sell signals than the generalist retail crowd. In 2008, when they saw a top building, they bailed out quickly, well ahead of the crowd. Moreover, those same guys had been busy that year raising cash and taking profits just before the collapse. So when we see a sharp sell-off in platinum that is steeper than the usual gold/platinum correlation might imply, the hairs should be standing up on the backs of our necks like a porcupine in heat. 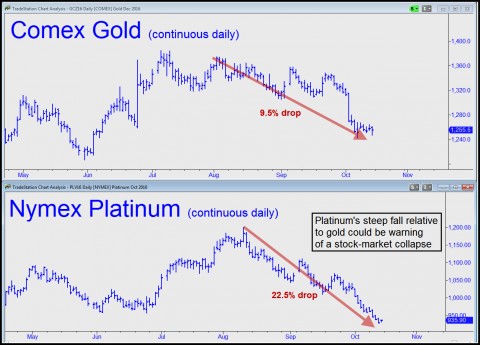 Now to my point. The resumption in August of platinum’s steep selloff may very well mean that DaBoyz have sniffed out a stock market plunge and that they are not waiting to get slammed when the clock runs out on this aging bull market.  The current sell-off in platinum is our warning that serious traders might be preparing for what could be a very significant market event. As proof, consider once again the charts above. Notice in particular how gold leads platinum in both directions. It can be helpful to study this chart and learn from the losses of others — including yours truly, who discovered platinum’s ‘prescience’ the hard way. A caveat: Nothing works 100% of the time.  But the current nosedive in platinum coincides with a likely market top that has my Spidey alarm ringing in my ears. While you are at it, play around with the time periods on the chart such as six months, one year etcetera and you will quickly get a feel for how well correlated these two metals are. The correlation gets as high as 95% at times, which is pretty scary and should give everyone a moment’s pause to consider just what it might be saying about the future of gold. Gold bugs may not want to hear any of this. However, the current, steep fall in platinum is telling me that traders are filled with fear, and that deflation is still a work in progress for commodities — all commodities, unfortunately — and that includes gold until the correlation breaks.