‘Smart Money’ Is Selling the Rallies, Not Buying the Dips 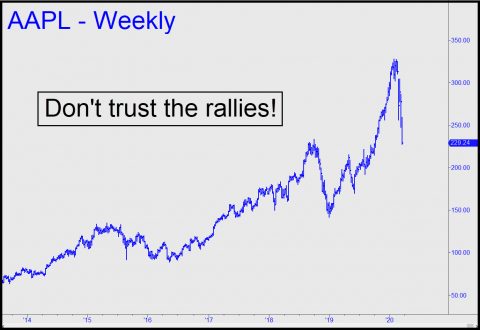 The pros who confidently bought the dips for more than a decade are now quietly selling the rallies. During the bull market, accumulating stocks on weakness was a no-brainer, as easy a ticket to big profits as investors will ever enjoy. But the bear market has ended this rare opportunity. Instead, the Masters of the Universe have been unloading as much stock as they can into every rally. This tactic was clear on Friday in the wee hours, when shares rose sharply on gaseous volume while most of us were sleeping. The intent to distribute was so obvious that Rick’s Picks put out a recommendation at 5:34 a.m. to short the E-Mini S&Ps. (Here’s the actual post in the Trading Room. The futures subsequently fell more than 200 points.) Only a few subscribers were able to take advantage of this guidance, however, because of the ungodly hour. Get used to it. Short-squeeze spikes tend to occur at times that are either inconvenient or intimidating to most traders: on Sunday nights; in the final hour on Friday; on the opening bar of day sessions. Rinse and repeat.

How to Recognize Distribution

Distribution is the name of the game these days, and you will need to understand how it works if you want to survive the bear market. We saw a sustained example of it in Boeing [BA] when shares held above $300 for an entire year while scandal engulfed the company. After deftly unloading as much BA as possible during that time, DaBoyz pulled the plug and the stock plummeted to $90 just ahead of the pandemic selloff.  Equally adroit was the outwardly gentle distribution of U.S. shares that occurred in early February. You may recall that the stock market hovered defiantly aloft for weeks, even as coronavirus stories out of Wuhan turned increasingly menacing. Is the stock market crazy, or what?  That’s what we wondered at the time, but the bullish behavior of the broad averages mildly persuaded most of us that the virus would remain China’s problem.

The seeming invincibility of stocks would have affected our political leaders as well, reducing their urge to snap into action when, it is now alleged, they should have hit the panic button. A few congressional scumbags — a redundancy, I know — rose to very the top of America’s political shit-heap by selling millions of dollars worth of stocks just ahead of the crash. Sens. Dianne Feinstein (D-CA) and Richard Burr (R- NC) have been named, but you can bet there were others. They had been privately briefed on the pandemic threat on Jan 24 by Anthony Fauci, head of the CDC.

Lately, the delicate task of distributing AAPL shares without frightening the unwary has become one of DaBoyz’ most urgent concerns. The company, by virtue of its enormity, stands to become one of the biggest corporate losers in the world as the pandemic intensifies assembly and distribution problems. The devastating hit to sales will come later, amidst a global recession-or-worse — most particularly in China, iPhone’ second-biggest market. Rick’s Picks had projected minimum downside to $235 when the stock broke below $287 a couple of weeks ago, and we held to that target even when a violent short-squeeze goosed AAPL from $248 to $279 in a day. The stock crashed through $235 on Friday,  however, suggesting that lower prices are coming — perhaps much lower (i.e., under $100).

But if you had been glued to the tickertape on Friday, you might have believed AAPL was a tower of strength, since it held in positive territory until the final hour. What telegraphed its day-ending collapse, an unsettling drama that led the entire stock market lower, was DaBoyz’ inability to pad AAPL with sufficient gains to resist late-session selling. It was trading up $2-$3 for much of the day, but that was not quite enough to fool the herd into thinking the market might rise into the closing bell. Instead, still smarting from having bought into last Friday’s run-up, and having come to understand that weekend news concerning the pandemic is still most unlikely to be hopeful, they dumped shares en masse.

Grave uncertainties remain concerning how much wider and deeper the virus will spread, and how much longer the U.S. economy will remain in a state of seizure. Under the circumstances, it seems unlikely the bear market has seen its worst. Short squeeze rallies, some of them powerful enough to persuade the rubes and their financial advisers, will persist nevertheless, abetted by smart money that will know exactly when to get out of the way.

Realize that stocks will be rallying not necessarily because the pandemic prognosis has improved significantly, but for technical reasons that will make us think the contagion and its economic effects have taken a turn for the better.  At some point one of these rallies could turn out to be the real McCoy, intuiting correctly that the worst is past. But if this doesn’t happen within the next three-or-so weeks, I’d say that chances of a global Depression are around 50%._______ UPDATE (Mar 23, 5:28 p.m.): Maybe it’s just me, but shouldn’t stocks be getting more lift from the Fed’s apparent all-in commitment to backstop…everybody and everything? I wrote here earlier that the actual stimulus effect that would result from sending out thousand-dollar checks to Jerry Springer’s audience wouldn’t amount to much. But even so, stocks are suppose to rally on the news, then sell off when sales of Cadillac Ecalades, bass-fishing boats and billiard tables start to pick up.