Deflation and the Pandemic 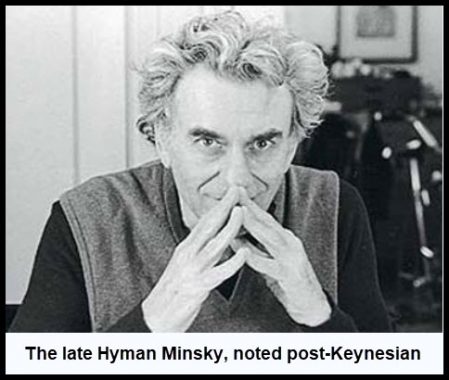 I appeared to occupy a unique place on the lunatic fringe when, many years ago, I started writing about the prospect of a short squeeze on the dollar. When I bounced this idea off a half-dozen finance professors, each had the same response: “Huh?”  Their incredulity notwithstanding, it has always seemed a given to me that it would take a catastrophic deflation to wipe out debts, both public and private, that long ago exceeded our ability to repay them. The main feature of a debt deflation is an increase in the real burden of debt. Ultimately, and unfortunately for all who are fully invested in the politically popular idea of a free lunch, every penny of every debt must be paid — if not by the borrower, then by the lender.  We kid ourselves to think we will escape it via hyperinflation. Realize that the biggest piece of what Americans owe, putting aside incalculable future liabilities from Social Security and Medicare, is mortgage debt. It is not simply going to go away, and that is why  deflation, rather than hyperinflation, is far more likely to determine the financial endgame.

This premise starts with the assumption that mortgage lenders will never accept a few hundred-thousand-dollar bills peeled from our hyperinflated wallets to settle up.  Instead, most mortgages will eventually have to be rewritten as lease agreements so that people can stay in their homes during the hard times that are coming.  This process is already well under way via a rental boom that has drastically altered the dynamic of the housing market. Private equity firms have not only been buying up whole neighborhoods at inflated prices in order to rent homes to those who cannot afford them, they have been building news homes to lease to the same tapped out crowd.

But the mortgage market is just nickel-and-dime stuff compared to the global derivatives market. This quadrillion dollar shell game is denominated almost entirely in dollars. Those on the borrowing side of the equation have avoided a Minsky moment because the central banks have been infinitely accommodating.  This crackpot scheme cannot possibly last, however, and the reason is become increasingly obvious: Monetary stimulus is not generating enough growth to pay off loans even at zero percent or less. The world is caught in a deflationary vise, and it is about to tighten because of the economic effects of the coronavirus.

It is the precipitous drop in the price of crude oil that most threatens the financial Ponzi scheme. Energy resources were the main source of collateral for the game when the world emerged from the mortgage-securities collapse of 2007-08.  “What tangible  asset can we hock up to our eyeballs this time?” asked the financiers. Their answer was crude oil, and now the enormous bet they made on the energy patch has started to implode. Even before the pandemic hit, fracking had glutted the world with quantities of natural gas and oil that OPEC and the Russians could not counteract even with drastic cuts in output. With the pandemic bearing down on global growth, there is no way to avert the liquidity-trap created by the implosion of hyper-leveraged energy resources. [Editor’s note: In a timely coincidence, crude oil plunged $13 overnight to a low at 28.57. The June contract has since bounced to 34.65, but I expect a relapse to exactly 25.88 before it’s over.  RA]

Another big problem for the central banks, and for anyone counting on easing to pump up the stock market, concerns money velocity. Realize that stimulus implies borrowing. Interest rates can fall to zero or even lower, but the money made available in theory has to be borrowed into existence before it can stimulate anything. The scheme works when everyone is confident that asset values will keep rising, as they very predictably have been doing for more than a decade. But the pandemic has knocked investors’ certitude about this for a loop, killing money velocity and with it the multiplier effect that causes economies to appear to boom.

The recent, unprecedented explosion in bond prices and the inverse collapse of yields remind us that another term for money velocity is liquidity preference. When stocks were rising relentlessly, there was little concern about liquidity because stocks themselves were quite liquid. Baby Boomers and other savers had come to regard the Apple shares sitting in their nest-egg accounts as the same as cash. Not any longer. In fact, the opposite will be true as AAPL and other portfolio mainstays continue to fall. “Liquidity is a coward,”  I wrote here recently (quoting Ray Devoe), and it evaporates at the first sign of fear.

Which brings us back to the dollar and the prospect of a short squeeze in which borrowers will be hard-pressed to come up with cash when short-term rollovers start to seize up. Here’s my colleague Bob Hoye on what to expect:  “We will stay with our old observation that the senior currency becomes chronically strong in a post-bubble contraction. And after building a base for a few weeks at this level there could be another rally.  To better understand this it should be understood that with most prices deflating in a post-bubble contraction the senior central bank will not able to depreciate its currency. The senior currency is still the U.S. dollar. Another way of looking at it is that service debt due in U.S. dollars represents a massive short position in U.S. dollars. And a central bank that can’t depreciate its own currency is like a pub with no beer.” Just so. Anyone banking on the Federal Reserve to come through for the economy and stock-market bulls is in for a rude surprise. _______ UPDATE (Mar 9, 9:02 p.m.) So now Wall Street is banking on the Fed to ease two more times in quick succession to bring administered rates down to near-zero. ZIRP has worked so well for Europe that it’s a wonder the feather merchants haven’t already granted Wall Street its wish, like, yesterday. Don’t put it past investors to pretend for a while that it will work, or for the hacks who invent the news each day to start talking up the coming housing boom.