The Stock Market Has a Fatal Neurological Disease 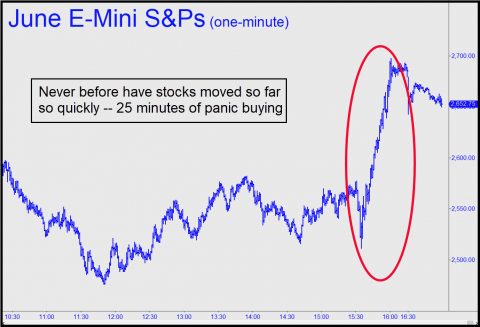 It feels odd to be characterizing Friday’s 2000-point rally in the Dow Industrials as “just noise,” but that’s what it was. It’s a safe bet that almost none of the buying was driven by optimism about how pandemic news would play out over the weekend. Who could predict such a thing? Uncertainty reins, and the only thing that seems certain at this point is that the normal flow of life and business in the U.S. and around the world will face more disruptions than anyone could have imagined even a week ago.

We look to the news media to make sense of it all, but those who write about such world-shaking events as have occurred recently often seem as confused as the rest of us. On Friday afternoon, for instance, when the Dow Average closed with its biggest gain ever, most of it achieved in less than an hour, the Wall Street Journal headlined its digital front page with this unintentionally wacky mash-up:  Stocks Soar as Trump Declares National Emergency. Linking these two events sounds preposterous, doesn’t it? The editors must have thought so too, since the headline was quickly changed to: Stocks Rise Sharply as Haywire Week Wraps Up.

Haywire would be an understatement, for it was the craziest, most volatile week in stock-market history. That’s because machines are doing nearly all of the trading these days, and the algorithms that instruct them are programmed to detect and exploit the stock market’s every cough, sneeze, hiccup or belch before any living thing feels even a slight tremor. It was bad enough when short-covering humans with hair-trigger reflexes could cause stocks to soar for little or no reason. But when ten thousand thinking machines are set against each other to accomplish the same thing, except profitably, the predictable reaction is irrationality on an epic scale. The embarrassing thing — for civilization, that is — is that trillions of real dollars change hands when these melt-ups occur. It is plain to see that the markets are riddled with a fatal neurological disease for which there is no possible cure — other than, perhaps, getting reset by a bolt of lightning.