The Mother of All Contangos 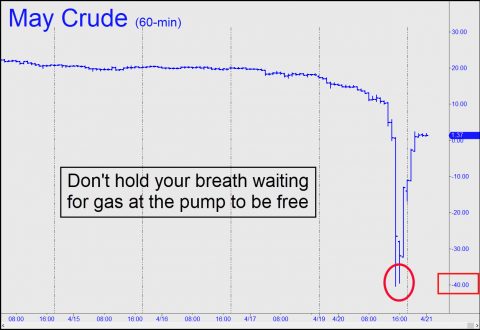 Crude oil prices are collapsing, but not quite as shockingly as commentators with little understanding of commodity markets would have us believe.  Expiring May Crude futures ended the day at minus $37.63, meaning anyone stuck with a contract when the music stopped either had to pay someone that much per gallon to take that contract off his hands, or take delivery. A single contract covers 1,000 barrels of oil, or 42,000 gallons — enough to fill quite a few swimming pools in Scottsdale if you were an at-home trader unfortunate enough to have to held a few contracts when Monday’s extraordinary long squeeze climaxed. Assuming your Arizona neighbors would not have been keen to help out, there is just no good place to put all that oil. Storage facilities, including tankers at sea, are filled to the brim even as demand is still falling because of the pandemic.

Delivery problems are a common cause of breathtaking price anomalies in markets where forward contracts are traded. This one will probably go down in history as the granddaddy of all contangos, a millennial event that sent spot quotes nearly $60 lower than forward prices. Just so you are aware, similarly crazy things can happen even with garden-variety puts and calls. In 1981, for instance, PSE traders who shorted October $30 calls in Santa Fe International, a contact driller, for small change got a rude surprise when it was announced that the Kuwaiti government had tendered a $51 offer for the company.  The call options in theory were worth only ‘teenies’, or $6 apiece, just before the announcement, but their price soared to $1425 before regulators halted trading in the stock. Market makers initially lost millions of dollars after selling thousands of call options to brokers working large orders from — surprise! —  Kuwait. Some of the insiders went to jail, including corporate officers of Santa Fe, and the market makers recouped at least a portion of their losses when the scandal worked its way through the courts.

As was the case with today’s collapse in crude futures, delivery issues compounded the problem. Those who had shorted Santa Fe calls were on the hook to deliver stock against exercise within three business days. If they possessed no stock, they were caught in the ringer, since it can take five days for shares acquired on the open market to settle. In order to buy stock for instant settlement, one must resort to ‘cash’ markets where a $30 stock might be quoted at, say, $90. A similar disaster snuck up on PSE traders when Levi Strauss announced it was taking the company private one Friday afternoon, moments after the bell. Call options that were out-of-the-money got exercised, forcing market makers who’d shorted the options to purchase stock in the cash market so that they could deliver stock against assignments.

Anyone who trades crude oil actively should have seen Monday’s meltdown coming, since the storage problem was out in the open and unavoidable. If you were on the right side of the move, it was as easy a way to turn $10,000 into $1 million in a single day as most traders will experience in a lifetime. Somewhere down the road, we shouldn’t be surprised to read about one or two of them who have retired to private islands in the South Pacific.  You energy traders who missed this play should consider new careers outside of the securities world, since you are dumber than dumb.