When ‘Money of the Mind’ Dies 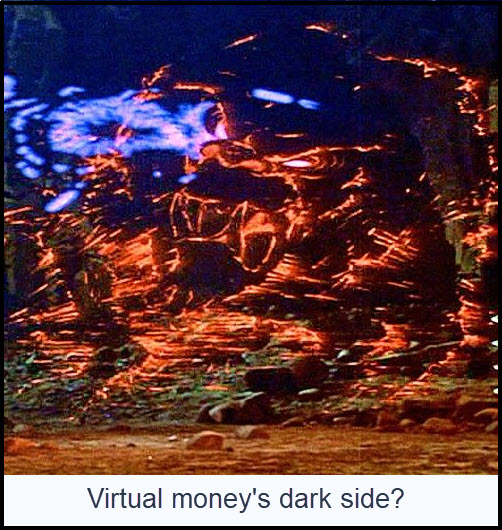 A little more than two decades ago, amidst the wild excesses of the dot-com boom, I wrote what turned out to be an epitaph for those heady times in the The San Francisco Examiner. It bore the headline Monsters from the Id Threaten the System, a metaphorical nightmare that I’ll explain shortly. Then as now, vast quantities of money driving stocks to absurd heights seemed practically limitless. ‘Easy Al’ Greenspan was in charge of the Fed, and the loose monetary policies he pursued reflected some of the crackpot ideas he evidently brought with him from Columbia University’s PhD program.

A fat lot of good they did him; for on numerous occasions, Greenspan would laughably refer to inflated home prices as “wealth.” He would also tout a supposed investment boom at a time when household savings growth was negative. As every freshman economics student knows, investment cannot exceed savings, and we cannot increase investment unless we cut back on current consumption. And yet, here we were, consuming and borrowing like crazy but still somehow “investing” in the future in defiance of immutable economic law.

It would seem that most economists these days continue to believe fervently in Greenspan’s monetary Rube Goldberg contraption. Still worse, the charlatans at the central bank who keep it lubricated and running somehow command nearly universal respect. This should probably come as no surprise, given all the bread and circuses that money-from-trees has begotten us. Few seem concerned in any event that as stock market valuations have climbed to insane heights, global debt in its many shapes and forms is approaching two quadrillion dollars. Let me type that out for you: $2,000,000,000,000,000! Most of it is swirling around in derivatives markets that are notionally ten times the size of global trade in real goods and services. Quite a bit of that “wealth” has been leveraged from the cash flow of giant companies such as Google and Facebook, both of which are glorified advertising firms that produce almost nothing of tangible value.

If you and I could create a derivatives market for little guys, just think of all the things we could do with the effectively costless billions it would throw off. For starters, to take a dubiously intangible example, how about a cloud-based firm to promote the health benefits of meditation? Separate billions could be borrowed to create teaching materials, and billions more to package bonds tied to the revenues the teaching materials could conceivably produce in a score of lifetimes. Wharton School grads working downstream of the bonds could churn out swaps and reverse floaters to sell to CalPERS and insurance companies. Getting rich off businesses that create nothing can be complicated, so there would always be plenty of work for lawyers, accountants, lobbyists, politicians, financiers and regulators.

Monsters from the Id

Concerning Monsters from the Id, they were the unseen enemy in the 1950s sci-fi classic Forbidden Planet. The creatures lurked in the subconscious of the Krell, an advanced civilization on the planet Altair-4. Their scientists and engineers colluded to achieve a technological pinnacle, building a fusion reactor that could be used to materialize anything one might conjure up in one’s mind. This worked beautifully for whipping up gourmet dinners on short notice, or producing flawless 10-carat gemstones for paperweights. But at night when the Krell went to sleep, creatures that inhabited their vestigial, primitive subconscious arose from nightmares to terrorize them, sometimes tearing them limb from limb.

Here on Earth we have succeeded in creating a crude version of the Krell reactor. It responds mainly to greed, and it is explicitly designed to serve a primal desire to get rich with little or no work. To this end, the Fed’s digitally enabled ‘reactor’ has been churning out hundreds of trillions of credit dollars for years. You’d need a PhD in economics to believe that this process can continue indefinitely, or that the supposed wealth it has created will outlast the illusion.

Remember, for Fed stimulus to work, the money has to be borrowed into existence. Under  the circumstances, it is both predictable and inevitable that some change in our lives will make people suddenly shun borrowing. Perhaps a turn for the worse in the pandemic will cause this, or an upward spiral in interest rates when market forces eventually demonstrate yet again that there is no free lunch. It is at that point that “money of the mind” will turn into digital cement, ending a bull market in stocks that has outlasted even the hardiest skeptics. ______ UPDATE (Jan 26, 8:23 p.m. EST): Speaking of the Id, of fear and greed, so many stocks are going hypersonic these days that we are probably closer to the end than I’d imagined even a week ago. And the thing is, everyone knows it — except for the little twerps who have traded their gaming consoles for Robinhood platforms.