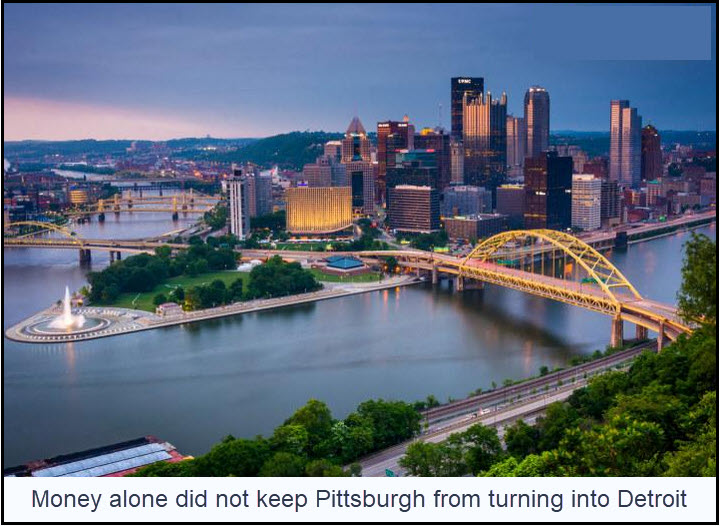 Biden’s $2.2 trillion ‘infrastructure’ plan is quite ambitious as far as Government boondoggles go. But what if it’s just the Democrats’ opening bid? “We can do $10 trillion!” exhorted Alexandria Octavio-Cortez in a wild-eyed remark that is unlikely to be challenged by fellow Democrats or the New York Times.  Even $10 trillion would be chump change, however, if Biden’s Trojan horse for the Green New Deal births the full-Monty environmental and civic transformation envisioned by AOC, Bernie Sanders, Elizabeth Warren and some other socialist zealots on the Hill.

It is ironic that Biden chose Pittsburgh as a backdrop last week to showcase the pandemic era’s first fiscal-stimulus monstrosity. Pittsburgh has been a model for urban redevelopment in the post-War era, having avoided getting sucked into an economic quagmire by its dying steel industry. Instead, the ‘Iron City’ transformed itself into an urban success story with massive investment in health care, banking, higher education, parks and cultural amenities. Is the Federal Government capable of deploying funds so judiciously?  It seems unlikely at a time when America’s political leadership has embraced the practice of financing vast Federal outlays with money from trees. Note also that Pittsburgh’s regeneration was achieved over many decades with private investment that sought maximum economic returns. In contrast, Biden’s plan seeks maximum political returns and contains little actual spending on potholes. With a partisan emphasis on social engineering, it seems more likely to clone Detroit’s dereliction than Pittsburgh’s prosperity.

Indeed, only a reported 5% of the proposed new trillions is earmarked for the repair of roads and bridges. A significant share of what remains evidently would go toward social tinkering and — heaven help us! — improving the weather. That’s what Pete Buttigieg, among others, has in mind, believing as he does that the transportation sector is driving ruinous climate change. Some politicians would use the money to undo damage wrought by ‘racist’ highways. In New Orleans, for instance, there is talk of tearing down the Claiborne Expressway, which, supposedly by design, divided rich white neighborhoods from poor black ones. (Does this imply that ‘divisive’ stretches of I-95 will have to be torn down as well? If you scoffed, then you don’t understand the new political zeitgeist.)

There’s also a big push for more electric vehicles, as though they were manufactured and assembled using non-polluting energy and powered by batteries made from recycled milk cartons. There is good news for Tesla owners, though, in the form of $174 billion worth of new charging stations. Fortunately, the mighty wind it will take to electrify them will always be in plentiful supply on Capitol Hill.