Why Low Rates Can’t Save Us 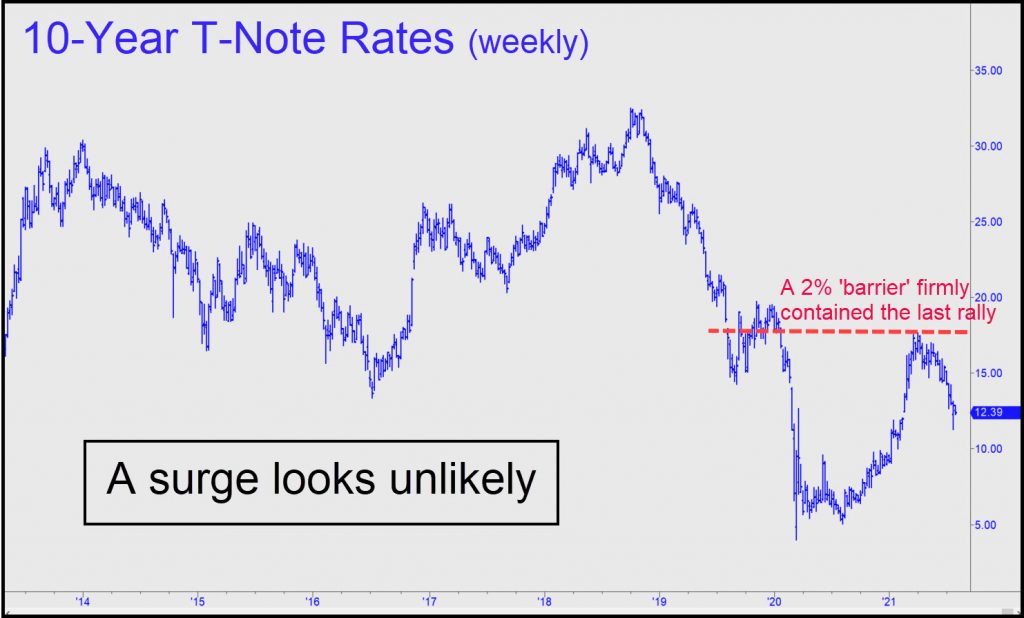 If you’re worried that interest rates are about to explode because of inflation, the graph above would seem to offer comfort. From a visual standpoint, the gentle rollover that has occurred over the last several months has sapped the vigor from a menacing spike that had pushed yields on the 10-Year Note from 0.40% at the start of the pandemic to a high of 1.76% in early April. The surge also failed to surpass previous highs near 2%, suggesting there is considerable resistance at that level. For the time being, this holds positive implications for the U.S. economy, since T-Note rates largely determine how much mortgage and corporate borrowers must pay for loans. It also helps to sustain the illusion of a stability in the global banking system. That’s because even a small tightening of the interest rate screw would have dire consequences if applied to the $2 quadrillion of borrowing amassed in the derivatives market. These financial instruments are used ostensibly for hedging, but over time their use has expanded to accommodate leveraged speculation on a cosmic scale.

A Network of Nerves

What would it take to crash this market? No one has a clue, although it is probably fair to say that it is as complex, and therefore ultimately as fragile, as a human nervous system. The synaptic connections are based on trust rather than neurons, however, and that is why a systemic failure would likely be total rather than merely in one “hemisphere” or the other. A further implications is that if stress levels got high enough, something akin to a stroke would result.

Fortunately, with ten-year rates at a current 1.24%, we are well below the danger zone. That’s equivalent to a blood-pressure reading of perhaps 130/80. Realize, however, that this seemingly normal reading exists only because it is controlled by a Federal Reserve that continues to dispense massive doses of QE stimulants. Buyers of stocks at these levels implicitly believe either that a serious panic is not possible, or that if it comes, the Powers That Be will quell it by putting Jerome Powell on the evening news to narcotize the herd.

Even if we are not tested in this way, there remains another scary possibility that almost no one is talking about: economic collapse caused not by soaring interest rates and a plummeting dollar, but by falling asset values. Real estate and energy resources are the chief sources of worry, since they are the main collateral for borrowing that has inflated the derivatives market to ten times the size of global GDP. Were prices for homes and crude oil to fall as hard as they did in 2007-08, nominal borrowing rates of 1.5% would turn into crushing real rates.

This actually happened post-2008, when homes in the U.S. lost an average 34% of their value in less than three years. We would be in an economic depression now as a result but for the fact that the Fed had plenty of room to ease credit. Mortgage rates were around  6% at the time. Now, with rates already at historic lows below 3%, that remedy no longer exists. The system is far more leveraged as well, and energy-sector collateral is in a bubble. The crucial importance of this bubble to the delusion that we can avoid a ruinous deflation is underscored by the fact the stocks and energy prices move in lockstep together. Wall Street loves higher energy prices, but the romance is fated to last no longer than the bull market in stocks. When the two begin to fall in tandem, it will be as though there were no bottom. The Plunge Protection Team, SIPC, the FDIC and other would-be heroes of moral-hazard may attempt a rescue, but like the Charge of the Light Brigade, it will be doomed from the outset.