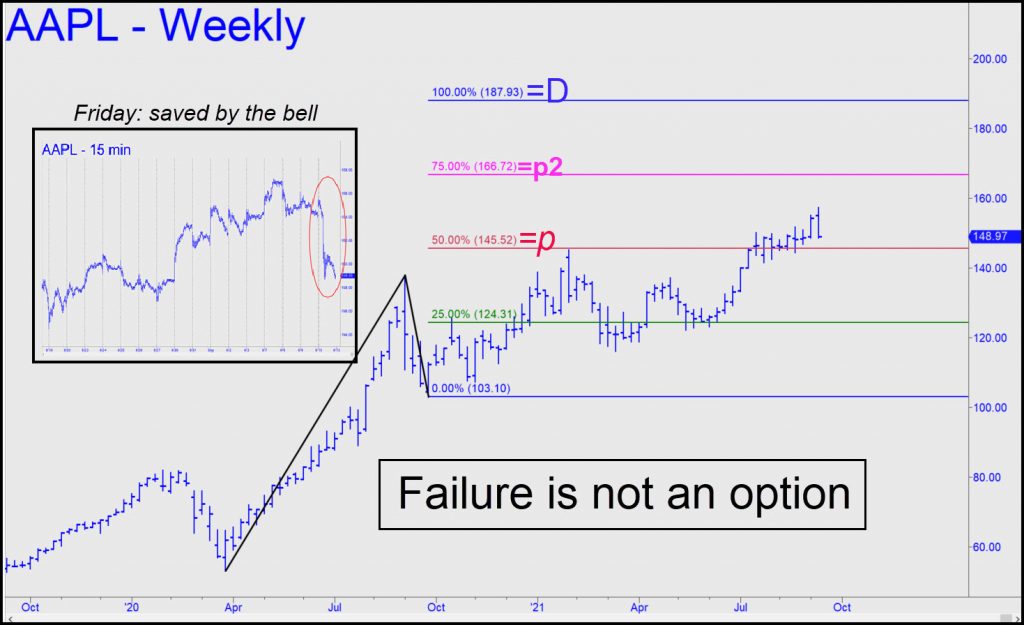 The weekend brought an autumnal breeze to much of the Eastern Seaboard, and with it raised hopes in some quarters that seasonality will trigger a long overdue avalanche in the stock market. Even a few bulls are hoping for this, since only a rip-snorting stampede out of shares can disperse the potentially explosive, hydrogen-saturated layers of hubris that have accumulated over Wall Street since stocks bolted into the blue 18 months ago. The astounding rally during a global pandemic has made the rich effortlessly richer while doing little to help the broad middle class. It has also undeservedly burnished the reputation of portfolio managers who have done little more than throw Other People’s Money at a relative handful of stocks. They’ve been winning like crazy for more than a decade, so who could blame them for believing their amazing run of luck will continue forever? Of course that’s the way things always feel at important tops, even if the Wall Street Journal and other cheer-leaders for investors’ salacious fantasies will try their hardest to explain why this time it really is different.

Most of us know better and can smell a top that is becoming increasingly pungent with each fresh instance of unsettling, if not to say appalling, news. The President’s steepening mental decline, for one. The New York Times, the Washington Post and even the Wall Street Journal  will somehow find things to like about Kamala Harris when it’s time to cheer her on, but there’s no pretending she’ll be any more effective than Biden.  And there’s the delta variant, a contagion so robust that it could conceivably put the world into a second lockdown that will make the first seem like a global street festival.

You could always argue that the market has become completely untethered from such real-world concerns, but even then, you’d still have to reckon with shares at valuations that are arguably the richest ever. Building a bubble on top of the existing one seems so implausible that we are left with perhaps three logical alternatives: 1) an extended consolidation sideways that lasts for years; 2) a sharp break to lower levels that are more easily sustainable; or, 3) a full-blow bear market, even though so many are expecting it.

How All Bear Markets Begin

I’m in the last group and therefore heartened by my friend Peter Eliades’ recent warning about Labor Day tops. There have been some notable ones, as he pointed out, and the risks of another would seem to be heightened by the extreme concentration of capital in just a few lunatic-sector stocks favored by money managers. As if on cue, the QQQ proxy for this group double-topped last week at a new-record high before falling about 2% on Friday. That may not sound like much, but realize that all bear markets begin with a single downtick off a summit that may not become obvious for weeks or even months.

But suppose Mr. Market has one more head-fake left in him? The chart of Apple, above, is meant to show how the endgame might unfold. We’ve always considered AAPL to be the most important bellwether for the world’s bourses because it so perfectly reflects the greed, folly and hubris of institutional investors. Based on the chart, I would ordinarily infer that AAPL is likely to reach the pink line, a ‘secondary Hidden Pivot’ that lies 14% above Friday’s close.  But I am allowing for the possibility of a trend failure midway between p and p2, meaning it is already under way, or perhaps between p2 and D. That’s because the actual levels have come to be over-watched and over-traded to the extent they no longer work. Thus, in order to find likely turning points, one must use the oceanic voids between the levels. Bottom line: It’s not over until the fat lady sings. Friday’s decline could prove to be the start of the Big One; but if the stock turns and exceeds the old high at 157.26, p2=166.72 would become the minimum upside target, and thence 177.32, midway between p2 and D. We’ll look to get short as opportunities develop, while remaining alert to the possibility that last week’s highs will come to mark the beginning of the end. _______ UPDATE (Sep 14, 10:45 p.m.): So far, so good!  AAPL has gotten kicked in the teeth this week and is down around 5%  Use the 144.68 target shown in this chart as a minimum downside objective, but also to get short ‘mechanically’ at 149.72 if the bounce gets there.