Just because there are a dozen great reasons to hate stocks right now doesn’t necessarily mean they can’t go much higher. Not only that, the bear rally could continue for quite a while – till 2011 and beyond, even – without distorting the bearish look of the long-term charts one bit. Take a look at the monthly chart below, which shows ten years’ worth of price action in the S&P 500 futures. Nine of those years have seen a bear market brought on by the collapse of tech stocks in 2000. But notice how, when the major bear phase ended two-and-a-half years later, the S&Ps embarked on a rally that lasted five years and which recouped 80 percent of the losses. It is categorized as a bear rally nonetheless, rather than as a bull market, simply because it failed to exceed the all-time high recorded in 2000.  If a similar rally is under way now in the S&P 500, it would imply that the S&P futures, currently trading around 934, will hit 1407 by mid-2014. Our speculative price bars (in red) show how the rally would look if it reached 1407 somewhat sooner, in early 2012. 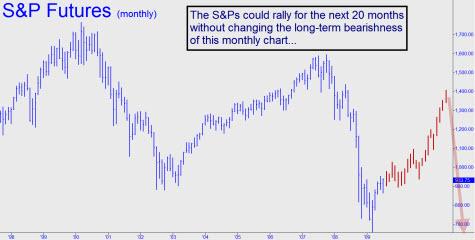 We think this is extremely unlikely, given the disastrous state of the economy. Where some optimists purport to see green shoots of recovery, we see the early stages of a collapse that eventually will be recognized as a full-blown depression. Under the circumstances, it’s more likely that, come 2014, the S&Ps will be trading closer to 400 than to 1400. Even so, we cannot rule out the possibility that the irrational surge begun in March will go significantly higher than anyone believes it “should” before sputtering out and reversing with a vengeance. The rally presumably would occur even as state and local governments slip deeper into bankruptcy and unemployment pushes above 15%.

While it might seem implausible that stocks could stage a gigantic rally as the economy slips into coma, we learned long ago that the two are not connected in a way that makes them act logically, much less predictably, relative to each other.  Popular wisdom has it that the stock market, all-knowing and prescient, looks ahead and sniffs out a recovery well before it becomes apparent statistically.  Our interpretation is a bit different. We see the stock market as deaf, dumb and blind; indeed, if it were a dog, it could not detect a lamb chop tied to its neck.  It is not prescience that makes stocks go up and down, we would argue, but rather the ebb and flow of fear and greed as they play out in broad cycles.

Fear seems to be nearly absent from the markets right now, the players apparently having tired of worrying about whether the numbers add up.  They don’t, of course, and the profits that banks have been reporting lately are just a mirage. But we shouldn’t be surprised if millions of investors continue to believe for yet a while that the mirage is real, especially when this point of view is the sum and substance of coverage each day by the relentless likes of CNBC and other advertising-driven purveyors of news.