(Following is the fifth in a series of article on gold by Chuck Cohen, a financial consultant and investor based in New York City. At bottom are some specific stock recommendations.)

Very few Americans own gold in any form. Even though gold’s price has risen each year since 2001, about the only time we hear gold mentioned is in the ubiquitous “cash for gold” TV commercials. Don’t you wonder who has any gold or jewelry left to sell?  The way it’s shunned, you might think gold causes swine flu or greenhouse emissions. It is most baffling to me to see our profligate nation diligently avoiding the most rewarding investment of the last decade. 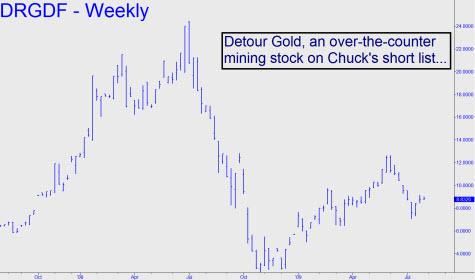 Under the circumstances, it is hardly surprising that only a miniscule number of investors have ever ventured into the most speculative field of gold, the exploration companies. These small and unproven companies might have market capitalization of anywhere from $5 million to over $200 million. Some contain proven reserves, while some are still searching for the mythical El Dorado. But even to many gold experts and believers they remain intensely speculative and risky, perhaps leaving you to wonder, why bother?

Here are some of the reasons often given for avoiding them.

Now there might be some truth in these claims if  these were ordinary times. But just consider that if you had applied these same arguments in the early 1990s, you would have missed out on the greatest speculative binge of our time – the technology-stock boom.  (Actually, most of us did miss it.) Few except for the true techies and the entrepreneurs who ran these companies really believed that these start-ups would ever succeed. But the shares of many of them increased in price a hundred-fold before the mania ended.

And that is what I expect this time, though to an even greater degree, since these companies are mining “money” in its most pristine form, and the wind is at their backs. Many will be virtual mints in a time of incredible paper currency turbulence and destruction. Yes, they are speculative, but I like the odds. Here is a very fundamental point in investing: The greatest gains have been in those investments that were shunned the most. As Mr. Buffett — Warren not Jimmy – likes to say when asked about his success, “I buy when everyone else in selling and sell when everyone is buying.”

Further details concerning these stocks and a sound investment strategy will be coming up next week. For now, though, you should know that:

Some Stocks to Consider

Above all, there are the two overriding reasons to own gold — one fundamental, the other technical. Concerning the former, the monetary landscape and the certainty of more and more fiat money will keep the gold fires burning brightly. As for technical reasons, on the charts, gold has been consolidating for years to launch into a parabolic rally.

(If you’d like to have Rick’s Picks commentary delivered free each day to your e-mail box, click here. )