What does Fibonacci analysis predict for Comex gold over the coming year?  We recently heard from a skillful practitioner of the dark arts, “Mestre Socrates,” who sees $1490 an ounce by around next May. But there’s a chance the path will not be smooth, he cautions, since prices could first dip as low as $1012 – more than $100 beneath current levels.  That would represent a great buying opportunity, however, according to Socrates – a place where bulls could back up the truck.  How confident is he?  Socrates notes that gold’s long-term price movements have been precisely foreseeable on the basis of Fibonacci sequences that have traced out cup-and-handle formations.  “Gold appears to have a predictable trading pattern of a new high, a slam down to the previous Fib level, reworking back to the previous high, a dull six-month ‘handle formation’ period, and then a two or three-month rally to a new Fib level. This has given workable projections for the comex gold price years in advance.” 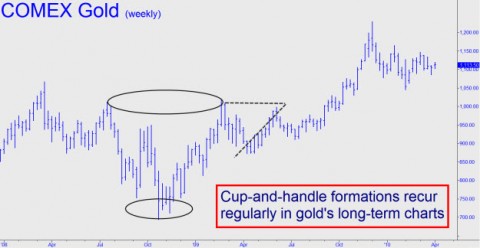 Socrates studied Fib numbers a decade ago with Larry Pesavento, a well-known technical analyst. “One of Larry’s ‘big ideas,’ ” he notes, “was the particular significance of the 0.786 level, which marked the transition from a simple retracement to a primary bull trend. Furthermore, once breached, a price could take out the 1.00 level and go straight to 1.272. The last major hurdle was to break through the 1.618 level and then ‘the sky was the limit.’ This applied to any financial instrument.”

So how does it apply to gold?  Socrates provided a detailed account of bullion’s ups and downs from 2003 forward, noting breakouts and cup-and-handle patterns that played out over periods as long as 18 months.  To bring the forecast up to date, the recent move down from $1212 to $1058 was far too big to fit in the oscillation category, so we can surmise that gold is doing another cup-and-handle routine, says Socrates. Where is the low likely to occur?  “Since $1014 was a real resistance level, it appears to be more likely to be closer to the final low than the next Fib number down, $850.”

Gold’s behavior between $725 and $1014 suggests that when gold peaks and starts to form a cup-and-handle, it takes five to seven months to reach the bottom of the cup. Is it about to repeat this behavior?  Even if it doesn’t, says Socrates, and bullion shoots above $1215 tomorrow, that would still be telling us something – “namely that fiat money growth was out of control and that inflation was accelerating. This is such an important point that it is worth repeating – the point in time when gold bottoms relative to the model’s prediction (April/May) is giving you an insight into where we stand in the deflation/inflation debate.

“On the other hand, all other things being equal, the model tells you that during this initial five-month bottoming phase, you can trade gold but should be wary of investing in it unless you’re relaxed about the possibility of a 10% to 15% drawdown. Gold is just ‘doing its thing,’ but from April/May onward it should again be generously inclined toward longer-term investors. And if it prints $1014, then it is a signal for a great $200 bull trade — almost as good as a breakout above $1225 when that finally happens.

“It also gives you a road map for the next 18 months.  To wit, if history repeats itself, gold has to print $1014 on the London fix as a bottom signal.  But this is due no later than May 2010 (it may dip $20-30 below this intraday, but it’s the London fix that counts). May-September will give a nice rally to around $1190, followed by a retracement to around $1110 in December, with $1210 taken out in March 2011 and the fast run to $1490 around May 2011. I am merely projecting the previous time frame here and do not claim to have a crystal ball.  But I should note that I would have done much better in my trading had I listened to this model six months ago.