Our Man Chuck Turns Bullish as All Get-Out

Turns out we weren’t the only ones who must have been doubting every uptick of last week’s phony, witless rally. How could one not distrust a stock market that has been surging higher solely because of short-covering and the manipulation of index futures each and every night during the wee hours on razor-thin volume?  Now, however, we learn that bullish sentiment is at an extreme low of 21%, according to the latest numbers from AAII. What this implies is that there are simply too many bears for stocks to collapse at this moment, notwithstanding the fact that the economy’s statistical slide into Depression appears to have resumed in earnest. 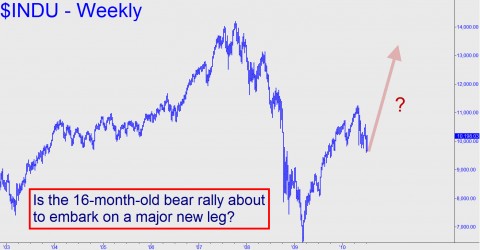 The last time there were so few bulls was in March 2009, when this Mother of All Bear Rallies commenced. Although we strongly doubt that the current dearth of bulls portends the start of a major new up-cycle, we’re willing to go with the flow for perhaps another week or two before we start resisting the tape once again with some speculative put-buying. Technically speaking, according to the Hidden Pivot Method, the Dow Industrials, which are currently trading near 10200, would need to hit 10921 this month to earn even the slightest benefit of the doubt. At any rate, we expect the market to be in feel-good mode as the new week begins, assuming the mildly encouraging news that has been emanating from the Gulf of Mexico continues to wax. Under the circumstances, bears will be especially vulnerable on Monday to yet another short-covering panic.

As counterpoint to our own, fervently bearish, bias, we offer below the unmitigated optimism of our friend Chuck Cohen, a NYC-based consultant who designs gold investment strategies for clients both big and small. (Click here if you’d like a free consultation.)  Chuck sent us the following note recently beneath the subject header “A major, major bottom…”  Although, to put it mildly, we do not share his rosy view, we are presenting it nonetheless because our own perspective had grown so very negative in recent weeks. Please note that his outlook for gold and gold shares is, like ours, quite bullish.

“Hello out there. I think that this week will mark a major change in the financial markets. I know it is really difficult to explain why the perception in the market can be very bullish at the end of April, and with a 12% drop, turn palpably bearish. The negativity is so bearish that the NY Times finally caught onto it and did their first-ever in-depth interview with Bob Prechter [last] weekend. It immediately became the overwhelmingly most e-mailed article. Now, why would this take place? My thought is that what Prechter was saying resonated with Ma and Pa Main Street, who see and feel nothing but pain in our country and in their lives.

“But as you know, the markets don’t care about the past or the media’s analysis. They look at the future, and in so doing remain the single best financial predictor ever devised. And right now some of the technical stuff that I look at is the worst that has been seen in many years. To me, that means we have likely seen the worst of the markets and most probably are ready to announce that the next move in the markets will not be the feared “Death Cross” [of 50- and 200-day moving averages], but a renewed climb most likely caused by the immense liquidity that is sitting on the sidelines in banks, IPO, buyout companies and hedge funds.

“The key point to the gold community is that this will now fuel the long, long awaited spectacular rally in gold, and, more importantly to many, the gold shares. Don’t worry that the shares have acted crappy for years. They will respond, and in a fantastic way.

“I still believe that the listed shares will be the first movers in this next phase. They have completed inverted head-and-shoulders formation that extend over the decade. Because we are so conditioned to disappointment, many will sell prematurely into the breakout that is coming.”