[To broaden the conversation, Rick’s Picks inaugurates a two-week series of commentaries today from guests who have contributed regularly to the daily forum.  I can promise that you’ll enjoy these essays, which cover topics ranging from the peculiar economic boom in Germany, to the failure of New Jersey’s casinos, to the possibility that the global economic breakdown has been meticulously engineered by financial and political sociopaths.  This morning we proffer the always-sunny thoughts of Mario Cavolo, an expatriate who lives in China. His very bullish outlook for the global economy contrasts with some of the gloomier think-pieces that have appeared in this space.  In the essay below, Mario extrapolates a very positive economic outcome from the $15 trillion of unencumbered equity that Chinese property owners currently have vested in their homes.  Will the eventual leveraging of this still debt-free sum, together with the irresistible power of China’s growing economy, be sufficient to pull the world out of its funk?  Read on for Mario’s optimistic answer. RA]

Current United States home mortgage debt: $15 trillion. Current China home equity: $15 trillion. Mortgage debt on those homes? Zero.  It is easy to suggest that this insight, which reveals a $30 trillion spread between U.S. home mortgage debt and Chinese home equity, better enables us to grasp the underlying forces impacting the economic power shift we are seeing from West to East. While it might be in vogue these days to criticize the United States for being built on a mountain of debt, I’d rather not. Let’s first take a moment to remember the positive effect the world over which the judicious and reasonable use of debt has had over the past 50 years. 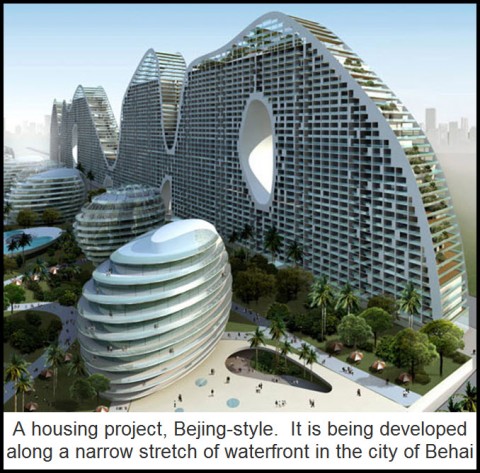 How’s that you ask? Because while it is in vogue to complain about America’s mountain of debt, that very same debt-based financial system enabled the United States to become, by an enormous margin, the largest economy in the world while the rest of the world’s countries also enjoyed their own growth riding on the American red, white and blue coattails. In truth, that never would have happened without the U.S. debt-financing binge, so let’s not pretend otherwise. Countries love to complain about America’s debt but they’ve enjoyed riding along as she rose these past five decades. The economic power of Japan and China lag far behind at only $4 trillion each, followed by Germany in the $3 trillion range. Maybe if they had committed to more debt to build industry and consumption, they’d also have proportionately higher GDP.

Alas, we note with grave concern that the words “judicious and reasonable” were removed from the use of debt formula, but that is not our focus here. While China at the government banking level has also done more than its fair share of economic stimulus lending these past few years, Chinese homeowners stand alone as a large piece of the world’s economic puzzle, with $$ trillions in fresh, new home-equity that will eventually make its way into the Chinese and global economies.

Let’s argue for a moment that the U.S. mortgage/China equity numbers we started with may be too general or generous to be meaningful. However, digging deeper into the history of property appreciation in the U.S. and China, that argument falls flat fairly quickly for an amazing reason: a key economic growth curve which took 40 years to create in the U.S. took only 10 years in China. Hence, what looks like an economic miracle is really no more than a statistic on an unexpected fast-track to the moon.

We recall that U.S. suburban home prices back in the 1960s were in the range $30,000 to $60,000. Those millions of homes today fall in a price range of $90,000 to $250,000. A time span of over 40 years was required to achieve that level of appreciation in value — a long, slow appreciation curve. Can we confirm that the average home equity is perhaps 20% today? Yes we can. 30% of homeowners in the U.S. have no mortgages. The other homes in aggregate with mortgages barely have a dime of equity.

Now let’s take a look at China’s home property value appreciation curve.  Property value appreciation that took 40 years in the United States has occurred in China in only 10 years. The unprecedentedly steep curve in China’s economic expansion explains a large proportion of the rising shift in economic power toward China. $15 trillion of home equity with no mortgage debt sheds even more light on the new reality. Imagine what the United States would be like if 50% of households were free of their mortgage payment.

There are no mortgages on any of those millions of apartments. Did you know that home mortgages hardly even existed in China in 2000 and they probably didn’t even have Chinese words back then for the phrase “credit cards”.  Only 10 years later, property in the media-worn first-tier “property bubble” cities have increased in value an average seven-fold, from $30,000-60,000 to $200,000-$400,000; while in second-tier cities, property prices have increased a much more reasonable four-fold, from $15,000-30,000 to $60,000-$120,000 across a much wider swath of the Chinese population. Considering normal long-term global economic cycles and property values, $60,000-$120,000 is a range those millions of households are likely to never decline below again.

Let me give you an accurate example to illustrate; a typical Chinese retired schoolteacher living in her five-story walk-up, 80-square-meter apartment, located in a garden apartment complex of 800 similar apartments in which we find all of the area’s retired schoolteachers living on pensions of $300 per month with full medical coverage. During their career well over 15 years ago, they were allowed to purchase this apartment for 800rmb per square meter which was about USD $10 per square foot back then. Today, the apartments are worth five times that:  4000rmb per square meter, or USD $50 per square foot, which equals close to USD $60,000, still a relatively modest valuation. The new apartment developments in the surrounding neighborhood are certainly much nicer and valued at closer to $100,000, which makes sense and is still within a reasonable range for urban middle-class home prices. Why? Because the city in general has been rebuilt and revitalized; because a new 180km/hour subway line is going in with a stop just 10 minutes walk away; because Sheraton, Marriott, Hong Kong New World Towers, Kerry Center and Shangri-la hotels have all appeared around the new convention center area downtown; because several multinational companies have set up shop in or outside the city, cranking out cars, car parts, software and medical equipment. Needless to say, these 800 retired schoolteacher home-owners all have 100% equity in their homes. That equity will eventually makes its way into the economy. Even within 10 years, many of these elderly will pass away, leaving the asset to their children who will most likely sell it and use the money in some other way, adding money to the economy. As they increase their tendency to borrow against this asset, that will add even higher levels of domestic consumption, a trend we take a closer look at further on.

Back in America, the Scottsdale, Arizona home I sold in 1995 for $110,000 is still valued at $180,000 today, even after a 30% drop from its peak value a couple of years back. With America’s economy still struggling, many expect that property values will still fall further. Understand that China is on the classic inflationary rise including all the historical hallmarks one finds such as rising prices and rising wages, supported not only by the popular reasons most often cited in the media, but also by the economic foundation of this unprecedented mortgage free equity pool.

Does a fresh pool of 70,000,000 mortgage-free homes scattered across dozens of China’s second-tier cities valued today at $60,000-$120,000 plus an additional 30,000,000 homes valued at $200,000-$400,000 pack an economically punch strong — enough to at least blunt the world’s economic woes? To answer that question, there are a couple of related variables to consider: Chinese are still loath to borrow on their home equity. When you buy something in China, you pay cash or you don’t buy it. However, we can consider entrepreneurial business owners as more likely to borrow — and who may borrow up to 70% of their home equity from a bank to build their businesses. We find that even borrowing of this nature is not yet a widespread practice in China. If the home equity loan rate hit 30% of equity, that would conceivably add $3-5 trillion of spending to the Chinese economy in the coming years, a welcome addition as far as the Chinese government is concerned to help stimulate domestic consumption.

Related to the question of such trends in lending and borrowing, Chinese today are still the world’s greatest savers, with a 30% plus savings rate. As Chinese consumers start borrowing more on their massive home equity pool to consume and make entrepreneurial investments, they will have additional monthly loan payments and the national savings rate could perhaps come down to 20%. Even a 20% savings rate would still be regarded as amongst the highest savings rate in the world compared to other countries. So when trying to understand the many factors which are supporting China’s rise, bear in mind the powerful factors we have discussed here like this enormous home equity pool, which stands quietly in the shadows as a leg of support behind the more popular topics and analysis on China typically found in the mainstream media.