Bets Against Europe Unlikely to Lose

With Ireland in the throes of an IMF-style bailout, we are being told not to worry about Portugal and Spain, since they are supposedly in significantly better shape. To be sure, Portugal is already living under stringent austerity measures, and Spain’s sovereign borrowing is nowhere near that of Ireland, let alone Greece, relative to GDP. So why are lenders imposing punitive interest rates on both? Simply because they smell blood. Not only are private lenders unwilling to help, they are actively betting against Spain and Portugal with credit default swaps that effectively raise the likelihood of a collapse when oddsmakers run out of room to lay off the action.  Opportunity moves to size, as traders like to say, and when they have something as large and juicy as a transnational bailout fund to target, it is all but guaranteed that they will. After all, there is a huge payoff if they stick with the bet until Europe breaks.  How do you think George Soros got so rich? 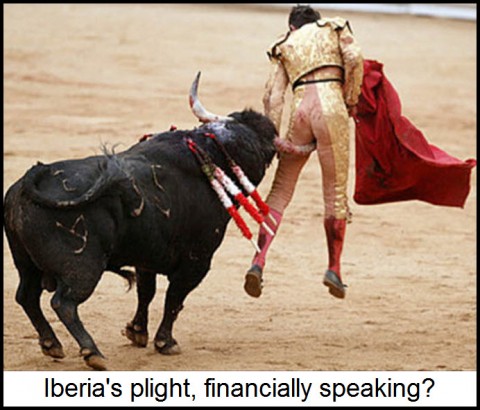 Meanwhile, the very assurance from Brussels that Iberia can get by without a bailout probably ensures the opposite. Only thing is, when Spain and Portugal reach that point – meaning, when currently punitive borrowing rates become literally prohibitive – the jig will be up for Europe. It is one thing to pretend that Greece and Ireland’s boats have been floated, since they were initially alone in needing a rescue. But when Spain’s broad stern starts to slide into the deep, sucking Portugal into the vortex, the pretense that Europe’s nearly trillion dollar rescue fund can turn back the financial mob will evaporate entirely. For now, it doesn’t help perceptions that Spain and Portugal are themselves guarantors of the current rescue package, which is worth nearly one trillion dollars. That’s like having California be a guarantor of New Jersey’s debts.

There are other factors at work that raise the specter of cascading failures somewhere down the road. For one, Germany has vetoed the idea of boosting the sum pledged to the European Financial Stability Facility (EFSF). The rest of Europe, it seems, would like to see it doubled to two trillion dollars.  However, Germany’s obstinate resistance to this idea is understandable, given that it is the only country with deep enough pockets to have any real skin in the game. Another problem is that even those seeking to double the EFSF must doubt in their hearts that any sum of ginned-up money, no matter how large, will suffice to turn back the tide. For in fact, even a two trillion dollar credit facility – and all attempts at fiscal austerity, for that matter — represent just a drop in the bucket compared to the imploding, quadrillion-dollar derivatives bubble that is sucking the world’s financial system into a black hole.  Spain’s plight illustrates this, since it is its derivatives exposure, not its budget deficit, that has caused lenders to wax extortionate.

And what of the U.S., which is arguably in worse shape than Europe?  Some might say we’ve been whistling by Euroland’s graveyard, but the truth requires a more cynical observation. For in fact, the Fed and the White House have a strong motivation to play up Europe’s problems as much as possible, since greater scrutiny of our own problems will only bring on America’s financial day of reckoning more quickly. To be even more cynical about it, Moody’s increasingly frequent downgrades of sovereign eurodebt seem timed to intercept cycles of weakness in the dollar. If such collusion exists, however, it has barely slowed the rise of gold, the financial system’s polygraph, even on days when the dollar appears to be “strong.” Since the first week in November, the Dollar Index has risen by nearly seven percent while Comex gold has declined by about 4%.  While it’s possible that carry-trade unwinds will cause the dollar to rise even more in the days and weeks ahead, we should not mistake this purely technical action for strength. On fundamentals, the dollar can only head lower over time, and we therefore see little reason to fear overweighting in bullion.  In assessing the condition of the world’s currency system, and judging the odds of its failure, gold is manifestly incapable of error.  No matter how bullion acts on a given day, we shouldn’t doubt that it enjoys enormous support from buyers around the world, especially those with large dollar reserves that are at risk. For that reason, and innumerable others, periods of weakness in gold and silver assets should be regarded as buying opportunities.