Last week’s financial headlines offered a study in contrasts. On the ostensibly sunny side of the news was the explosive evacuation coaxed forth by General Motors’ IPO. Economic optimists must have rejoiced at this spectacle, oversubscribed and charged with hubris as it was. Just like in the good old days, speculators and Wall Street bunko artists couldn’t get enough of a bad thing. Or are we perhaps being unfair to GM?  At best, we’d say the jury is still out, given that it has taken $50 billion worth of Federal largesse to elevate the once-mighty automaker from basket case to dubious recovery story. Nowhere in the torrent of stories about the IPO was there even a word about the actual cars that GM builds. Not that this would be a concern on Wall Street, with its idiot savant focus on the deal itself. For the record, we’ll mention that the latest Consumer Reports is not exactly gung-ho on GM’s, um, product.  Although the company has made strides in engineering and quality, notes the magazine, it still has a ways to go before it catches up with foreign competitors. (And let’s not even mention the Volt, a GM hybrid that looks like it will take every bit of a planned $7000 subsidy to dislodge the car from showrooms.) 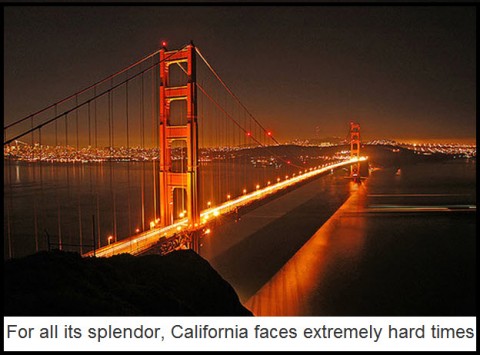 So if the hoopla-and-hubris surrounding GM was last week’s “good” news, what was the bad?  In case you missed it, a bankruptcy-in-progress that will eventually dwarf GM’s took another small step toward the abyss. We are of course referring to the latest bond sale by the Golden State — a $10 billion debacle that drew such a tepid response that California was forced to cancel a second debt offering this week worth $267 million.  Too bad they don’t have a Federal Reserve-type bank of their own to take up the slack, since sucking up $10 billion worth of the wishfully named “revenue anticipation” notes would have been mere chump change if handled Bernanke-style.  Come to think of it, California may have laid the groundwork for just such an experiment when, earlier this year, Sacramento paid its employees with IOUs.  Why not simply issue more such IOUs to buy its own bonds?  That would almost exactly mimic what the Federal Reserve has been doing through its “quantitative easing” con-game. An added plus is that the tactic might spur some public discussion of quantitative easing itself, possibly enlightening the mysophiliacs who bring us the news each day. Business reporters, pundits and columnists — even that loony leftist who writes on economics for The New York Times — seem not to understand the process of quantitative easing very clearly, since, as far as we are aware, none of them has even bothered to ask the question, “How does the Fed pay for all of that Treasury paper it has been buying?”  Isn’t it time they looked into this?