After a long holiday weekend, U.S. stocks came stumbling out of the gate Monday, unable to determine how, or even whether, they should react to yet more “strength” in the dollar.  We’ve wrapped the word “strength” in quotes because it is only in relationship to a euro enfeebled by financial crisis that the dollar could ever appear to be strong. And so it was yesterday, with the Dollar Index rallying to within 0.66 points of an ambitious, 81.80 target we’d sent out to subscribers the night before.  We had thought the latest eurocrisis had been laid to rest with the imposition last week of a bailout package on Ireland. The country had officially requested help, after all, and one might have thought that the ratification of the deal would have been automatic.  Turns out, the Irish people themselves will have a say, since their parliament will meet on December 7 to pass a budget that may or may not incorporate the provisions of the bailout. 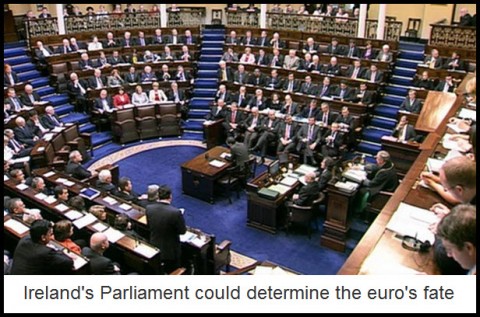 Those provisions evidently were not buried in fine print, since fully one percent of Ireland’s population marched on Saturday to protest them – to protest the tough strictures that the bailout, worth an estimated €85 billion, would impose.  For starters, any money borrowed would have to be repaid at 6.7%, a return that even the most aggressive hedge funds are not achieving in these deflationary times. And for two, the Irish would have until 2015 to get the budget deficit down under 3% of GDP, in accordance with EU rules. If that’s the best that lenders have to offer, then at least 50,000 to 100,000 Irishmen who marched over the weekend would rather tell the IMF to shove it than accept all the strings that would come attached to the deal.

What that means in practice is that the euro is likely to remain under pressure till at least December 7. And if Parliament should vote down the package?  Expect the euro to get savaged as never before. Earlier, we’d told traders to buy euro futures aggressively if the December contract fell to 1.2953, a Hidden Pivot target that lies about 1.2% below the current price of 1.3116.  But if the vote on December 7 rejects the IMF package, we’d back off the recommendation and buy euros at our target only with tight stops.  At that point, the euro would be vulnerable to a further fall to at least 1.26, where the “structural” support of some key lows made in late August and early September would be felt.

For the record, although a “strong” dollar over the next couple of weeks would put further pressure on gold and silver, we would expect bullion to hold its own as the Irish crisis peaks. Gold, currently trading around $1367 (basis the Comex March contract) might come down as low as $1300 under the circumstances. But whatever lows in bullion correspond to a euro selloff in the days following a parliamentary “nay!” we’d view them as the buying opportunity of the year.