Finally, It’s the Fed That Has Become Too Big to Fail

We’re still not sure whether CNBC was making a joke or simply advertising its ignorance with a recent headline, “Accounting Tweak Could Save Fed from Losses,”   This was a tweak about as subtle and ingenuous as Bernie Madoff’s balance sheet.  What the central bank did was revise and advantage its own rules so that if some financial catastrophe were to inflict huge losses on the Federal Reserve System, the U.S. Treasury would take the hit, not the Fed itself.  Oh, and taxpayers needn’t be concerned about the presumptuousness of this coy arrangement, since the changes provide for the Fed to pay back the losses with future profits.  Do we really need to point out to CNBC et al. that any such profits would have to come almost entirely from…interest income on Treasury bills, bonds and notes held by the Fed? 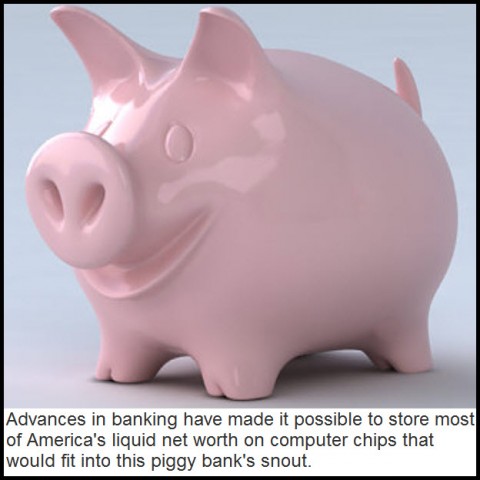 Who would have believed that the nation’s banking system would one day be powered by the feather merchants’ version of a perpetual motion machine, or that the bulk of America’s liquid “wealth” could be stored on a few computer chips no bigger than a piggy-bank’s snout? As we now know, all it takes to pull off this scam is a credulous press, an ignorant Congress, and central bankers so cynical that they actually believe the public is too stupid to understand what’s going on.  Thus is Helicopter Ben able to say with a straight face: “Under a scenario in which short-term interest rates rise very significantly, it’s possible that there might come a period where we don’t remit anything to the Treasury for a couple of years. That would be I think a worst-case scenario.”  Hello!!!!  Are we actually supposed to believe that the day this Zimbabwean twist on quantitative easing is announced, that it won’t send the dollar into a death dive, making Americans poorer by a third, or even half, overnight?

News reports noted that the Fed rule-change was announced on January 6 but that it took a couple of weeks for its significance to sink in. Significant in what way?  In Reuters’ words, it is significant because “It makes [the Fed’s] insolvency much less likely.”  This explanation is darkly funny for two reasons.  In the first place, by accepting the Fed’s spin at face value, the news media have trained their eagle eye not on the crafty magician’s hands, but on the breasts of his assistant, just as the Fed might have hoped. And second, the notion of insolvency’s being “much less likely” is a blatant cop-out that as much as admits the news media don’t know what the hell the rule change is going to accomplish. They are telling us the Fed’s three-card-Monte switcheroo is significant because it supposedly will protect the Fed against going belly-up.  But is that what is significant here?  In fact, when the day comes that the Fed is forced to acknowledges the worthlessness of its vast mortgage holdings – a day that is surely coming — even the village idiot will understand that Treasury is powerless to set things right (other than by ginning up hyperinflationary quantities of cash). In the meantime, don’t expect the working press to delve into the actual significance of the “accounting tweak;”  for if they were to expose it for the brazen fraud it is, the resulting epiphany of a failing economy with no political route to recovery would be too painful and bewildering to bear.