Are You Ready for a Food Shortage?

The U.S. could be hit with widespread food shortages as early as April, according to an article linked recently in the Rick’s Picks forum, “Food Supply and Affordability Are Seriously Threatened.” The author, Kellene Bishop, alluded to a perfect storm of factors likely to impact food supplies and prices. “It’s headed into our homes no longer than six months from now, and more likely to be obvious six weeks from now. Unless you’re enjoying an income that can take a 40-50% increase hit in your essential expenses, then I’m certain you will not be spared the impact of this snowball that’s rolling down hill, gaining in momentum and size; and it’s coming right to our front doors.”

Evidently not one to panic, Bishop suggested that in anticipation of grocery-supply disruptions and explosive price increases, we start preparing now with a “methodical, peaceful and deliberate mindset” and no fears of an Armageddon-like event. “I believe firmly that a daily awareness and effort to create a more self-reliant world is critical in developing one’s ability to endure any other type of crisis.” 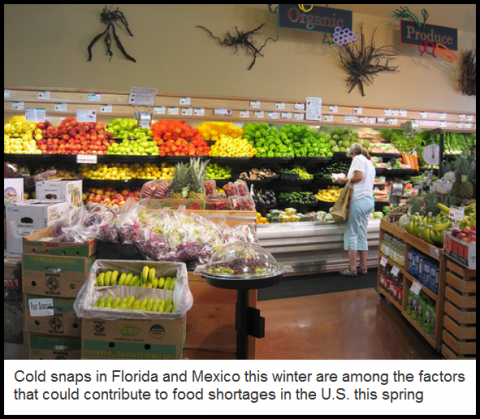 Not all of those who commented on her essay shared the author’s Zen approach to getting ready, however. There was this response, for one, from a take-charge dad whose brood seems unlikely to starve even if America a few years from now comes to resemble the post-apocalyptic vision of hell-on-earth depicted in Cormac McCarthy’s The Road. “I Spent 11 years in the US Army,” he wrote, “three years in a Ranger battalion, two years as a weapons instructor, one year as a Pathfinder team leader, five years’ regular infantry, and one combat tour. Because of this I have no illusions of the evil that lurks in the hearts of men — seen it first-hand. I am a single parent…my 14-year-old son and I have trained very much in-depth in close-quarters battle with assault rifles, shotgun and handgun. Why? People go crazy when they have no food…when their children are starving they go totally out of their minds, and if you have prepared they will be looking at you. Buy weapons, ammo and pay for training. You will not regret it.”

Although in her essay, the first of a series, blogger Bishop did not go into detail about the perfect storm that could send food prices soaring, disconcerting signs are there for anyone to see. For starters, although grocery prices are already rising at the most astounding rate we have personally witnessed in our lifetime, they continue to lag commodity inflation that has been headline news.  Still worse is that the trend could just be getting off the launching pad if the price of crude oil is headed above $100 a barrel, as seems likely.  That would drastically increase prices for seed, feed and fertilizer, with a dramatic impact on virtually all food prices.  One perfect-storm factor already making itself felt is the one-two punch of low temperatures in, first, Florida, and then Mexico. Tomatoes, beans, bell peppers and eggplant were among crops that have been devastated in both places, with Mexican growers reporting crop losses of 80-100%.

We’ve linked Bishop’s article because we fully share her concern that food prices and supplies are especially vulnerable right now to shocks that could devastate households.  For those who want to take steps to prepare for such circumstances, we would also recommend a superbly useful book written by a friend of ours, Sean Brodrick. Available at Amazon (in paperback for $7.99), it is entitled The Ultimate Suburban Survivalist Guide.