Getting the Jump on a Possible Food Shortage

(Expanding on a commentary aired here earlier in the week, my wife Marilyn has written below about her own experience in preparing for possible food shortages. The essay contains tips and links for do-it-yourselfers as well as for those who don’t have time to gather the necessary resources themselves.  RA)

A recent commentary here regarding the possibility of food shortages in the U.S. elicited quite a response, especially from those who are hunkering down in anticipation of a full-blown cataclysm. There is certainly evidence that even if  a total disaster doesn’t strike, there will be food shortages, and what food does make it to the store shelves will be more expensive – possibly much more expensive. Rather than honing my gun skills and digging a bunker in the back yard, I’ve decided to take my summer gardening from a few pots on the deck to a full-fledged vegetable garden; to exhume my grandmother’s “putting up” recipes; and to learn the basics for storing food in our home. I know how to grow vegetables, and I’m a moderately-confident canner, but when it comes to food storage, I don’t have a clue. But I know who does. Chances are, you know someone too, if you have a Mormon friend. 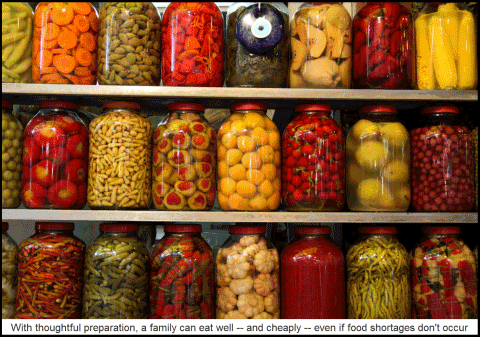 Many people have basement pantries and shelves of peaches, pickles, jellies and dilly beans, but I needed the information from the people who know how to survive off their food storage – for three months, six months or even a year. The go-to group for this are members of the Church of Jesus Christ of Latter Day Saints (LDS). I have two LDS friends and they have directed me to the clearest easy-to-follow instructions for starting out as a food-storer.

You need a room with a consistent climate (garages aren’t great; cool, dry basements are better), some sturdy racks, an extra refrigerator/freezer or deep-freeze, and large containers (five-gallon drums – often given away free by candy factories and chocolate shops). I heard more than once in my research tales of families who were faced with having to eat from their storage, and wishing they’d had less wheat, rice and dried beans, and more canned meat, vegetables and fruits. For a list of items, and the numbers of each, that you would need for these three-, six-, and twelve-month supplies, the best resource by far can be found by clicking here.

This site, run by Tammy Hulce, state coordinator of Utah Homemakers for America, not only gives you step-by-step instructions for figuring out how much you or your family will need of any given food item, but also great tips for using the proper preparation of your stored food. She explains the difference between water bath- and pressure canning, and the benefits of vacuum sealing, freezing and dehydrating certain foods for maximum shelf life. She also gives templates for calculating your family food requirements, shelf inventory and rotation guides. This last one is key because the money you spend to stock your storage is wasted if the food spoils or goes out of date. Tiffany M. Hess, education director for Utah Homemakers of America, says the best tip she ever got was from her dad. “Even if the food is weeks to expiration but you know you can’t use it and someone around you can’t use it, your local food bank CAN. Put that food in their hands and help someone else.”

What question is asked most often of food-storage wizards? Answer: What about water?  While having adequate food is crucial, having plenty of clean, drinkable water has been the challenge for people the world over in times of catastrophe.  Janice Holmstead Johnson, who knows people who have faced such emergencies, sometimes with little or no warning, stresses how important water is and what you can do to insure you have enough. Johnson suggests you “add a second water heater to your house to give you more water that is ‘stored’ and refreshed regularly, rather than using huge storage containers that you have to empty and refill.”

And, what about the huge, pre-packaged food “kits” advertised on urban survival sites? None of the storage experts I consulted suggest going that route — unless, of course, you simply have no other options. One site that offers such kits – in addition to a multitude of truly valuable resources (books, articles, recipes and water storage devices) is Emergency Essentials, which can be found by clicking here.

So, with spring just around the corner (unless you live where we do, then it’s around several corners) get your seeds now. As was pointed out in Monday’s commentary, a big rise in oil prices would raise the price of everything, including the plants from which the seeds are taken. Don’t wait for prices to go up. Get your garden in and get ready to can when harvest is upon you. And, “never buy canning jars at full price,” says Johnson. “You can probably pick them up at your local Goodwill for next to nothing.”  Plan on spending time canning in the kitchen this summer so that when winter comes and prices have gone up dramatically, or the items simply aren’t there to buy, you’ll know that your family will eat, and eat well.