[Yesterday’s commentary touched off quite a debate, and so I am running it for a second day to encourage further discussion.  However, I am supplementing the essay with a link to one of my favorite bloggers, Charles Hugh Smith, who offers his own, compelling reasons for asserting that hyperinflation is simply not in the cards.  Basically, he argues that it would not suit the interests of the rich and powerful, who after all are heavily invested in financial assets that would plummet in value.  I have argued the same point, albeit from a different angle, by asking the inflationists to explain why the supposed Masters of the Universe would permit hyperinflation when it would effectively allow Joe Sixpack to pay off his mortgage and all other debts held by the rich and powerful with confetti.  Smith’s paper is entitled  The Mechanics of Hyperinflation:  Bankers vs. Politicos, and it can be accessed by clicking here.  He provides a further link to an Austrian analysis that explains why Weimar’s money blowout was quite different from anything that might occur in the U.S.  The crux of it is that Germany’s money supply was controlled by the political class rather than by such rich and powerful behind-the-scenes players as created and still control the Federal Reserve.  I would ask that anyone who joins in the discussion from this point forward be familiar with Smith’s argument, if not necessarily with the Austrian treatise. Please note that if your additional comments are not published it is because I have raised the bar to eliminate repetition.  RA]

I awakened Sunday morning on three hours of sleep, lucid of mind and filled with dread from an essay linked below that I’d read before going to sleep. Amidst the desiccated hell of Colorado’s, and the entire Southwest’s, pine-forest die-off and a disturbingly winterless winter, even my wife still doesn’t get it.  She seems to think that because peak real estate valuations have held up so far in our Rock Creek neighborhood, that they will continue to hold or even rise. It’s difficult to say why prices have stayed aloft here in Superior, Colorado, which lies just south of Boulder, about 20 minute from downtown Denver. Most likely, a combination of factors is involved. For one, in comparison to Boulder real estate, where downtown condos with a view of the Flatirons are listing — though not selling — for as much as $3 million, you can buy twice as much house in Rock Creek for half the money.  Second, the supply of homes in the development is very tight, since only a few new dwellings were built here in recent years. Third, the schools nearby are rated among the best in Colorado. And fourth, there is the planned Conoco-Phillips campus for research into alternative sources of energy.  The company has yet to break ground, but once this project is completed the facility will be a beehive for an estimated 7000 scientists, engineers, consultants and other white-collar workers. 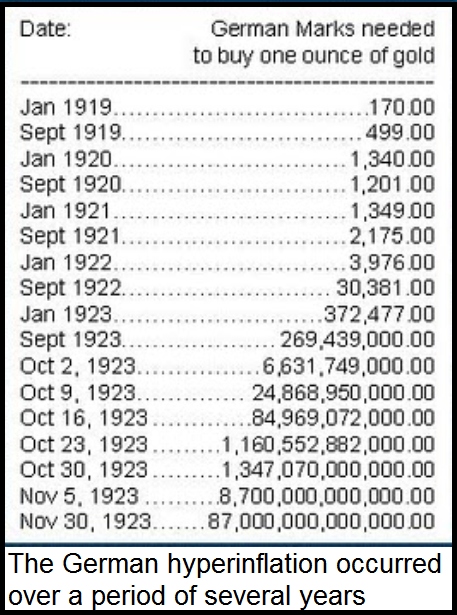 Even so, I don’t believe for a minute that Rock Creek will somehow avoid the deflationary juggernaut that has already crushed real estate valuations across the U.S. by more than 30 percent.  I predicted here years ago that home prices would eventually fall by at least 70 percent before deflation ran its course, and I am sticking with that forecast.  It implies that even after the wholesale price destruction that has occurred over the last three years, the worst is yet to come.

And yet, for the moment, it is understandable that the hyperinflation argument has been enjoying (if you’ll pardon that word) a bold resurgence – one that has caused even me, a hard-core deflationist who has been writing on the topic since the mid-1990s, to second-guess myself. After all, fuel and grocery prices are rising steeply, and Federal debt — $14.270 trillion and counting —  has entered a vertical parabola. While this appears to buttress the hyperinflationists’ arguments, and although Peter Schiff’s scenario – hyperinflation triggered by all-out monetization of T-Bonds – remains plausible in theory,  it became quite clear to me, lying awake Sunday morning before dawn, why deflation will prevail – will in all likelihood smother an incipient hyperinflation before it even gets off the launching pad.

Let me explain.  To begin with, we cannot have a Weimar-style hyperinflation for reasons that will be obvious to anyone who has read Adam Fergusson’s classic on the 1921-23 Weimar hyperinflation, When Money Dies.  As Fergusson makes clear, this panic fed off a cash economy, not credit; and it required close collusion between the government and trade unions. In contrast, the U.S. economy is cashless and the unions are widely reviled.  That said, let me cut to the chase:  Hyperinflation occurs when people, fearing their money is about to become worthless, panic out of currency and into physical goods.  This is highly unlikely to happen in the U.S. for several reasons, to wit: 1) Whereas Germany’s hyperinflation took several years to ramp up, today’s financial markets are primed for a catastrophic collapse that could conceivably run its course in a week, if not mere hours; 2) under the circumstances, there would be no shifting of financial assets into hard goods simply because any financial assets one holds at the time of the collapse would become worthless before one could sell them; and, 3) at that point, there would be insufficient currency available to drive a hyperinflation, since mattress money is likely to be scarce and because branch banks keep only about $25,000-$50,000 in cash on hand. All of which implies we will go straight to deflation without the emancipating, hyperinflationary interlude that some mortgage debtors might be hoping for.

Until now, I have been reluctant to air the simplistic argument, used by economists when they are at their most condescending, that inflation implies nothing more than an increase in the money supply.  Although that’s a truism that we would not argue with, it holds little value for anyone attempting to predict how a drastic increase or decrease in the money supply might play out symptomatically. While the textbook theory of it could account for the gas-and-groceries inflation that QE1 and QE2 have produced so far, it fails to explain logically how we would go from grocery-store inflation to systemic and pervasive hyperinflation. To repeat: Hyperinflation would require the shifting of cash money into physical goods and assets. But other than mattress money and the relatively paltry sums of cash on hand at branch banks, there would be precious little cash to shift.  And if the panicked money is assumed to come out of Treasurys and other paper assets, it begs the question of how much the paper assets will fetch on the day when there are no buyers other than the Federal Reserve.

My argument is simple, and I will not yield ground to any hyperinflationist who fails to explain, if the system collapses, where the money will come from to bid tangible assets skyward. Nor will I even print comments from the flat-earthers who see the financial system somehow muddling along, avoiding a collapse indefinitely. In any event, I would urge you to click here for Jim Quinn’s powerfully persuasive essay if you want to know why a financial collapse is not just likely, but inevitable.

I invite readers to attempt to rebut my argument in the Rick’s Picks forum – to tell me exactly where the cash will come from that would allow Americans to bid the price of hard assets into the ionosphere. In the meantime, I plan to run a guest commentary later this week concerning one asset class that seems likely to outperform all others.  Hint:  it is not bullion. And, this investment category could conceivably increase in absolute value for the same reason that the pine forests of the Southwest are dying.  Under the circumstances, the asset appears to be very undervalued at the moment. It will be out of reach once the system crashes.