Is Canadian Farmland the Best Investment of All?

[I alluded here earlier to a class of investable assets with the potential to grow in value more spectacularly, even, than gold or silver. In the guest commentary below, my friend Tom McCafferty, a commodity trader and author of numerous books, makes the case for Canadian farmland as the best place to sock away money for your grandchildren. Obviously, this would require more capital than you might sink into precious metals or stocks. But, as Tom puts it, if you’ve got “a couple of million” to spare, this is arguably a very good place to bury it. RA]

If you’re worried about the economy your children, grandchildren and even your great grandchildren will inherit, there is an investment that has the potential to help all three generations.  It should even be rewarding in your life-time as well.

I’m talking about Canadian farmland.  Not the beautiful mountains along the coasts, but the real, dirt farming, i.e. wheat, corn, oats, sunflowers, soybeans, sorghum, barley, etc., in the center of the country.  But first things first:  Why Canada? 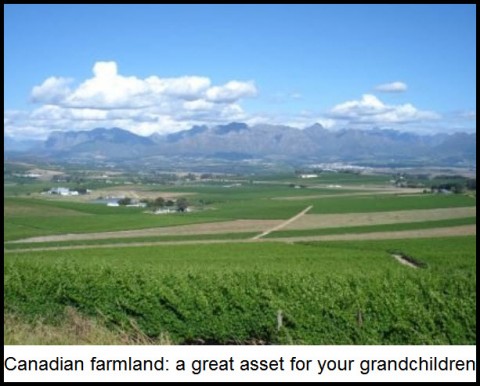 All that is needed to produce food for decades to come is available in Canada—at bargain price compared to the rest of the world.  All you must accept is that producing food will be a profitable business for the next 5, 10, 20 or 30 years.  For some reason, I really do not expect the world’s population to begin declining, nor do I worry much about the present population wanting to move up the food chain from eating rice to munching on a good New York strip steak.  Also, much of what comes off these farms can also be used to make fuel and clothing.

At present, food inventories worldwide are at historic lows.  Conversely, demand is on the upswing, as is world population.  It is my firm opinion that this divergence will get wider in the decades ahead.  Asia is a great example.  The two major countries, China and India, are steadily relying more and more each year on imported food.  Simultaneously, they are developing middle classes demanding an upgraded diet—both in quality and variety.  India has the potential to be even more demanding in the next few decades because its “Green Revolution” has become a disaster.

What about the current return from farming?  It has been calculated to be just below 8% for the last five years, as per NCREIF US Farmland and Office Index.  And at just below 12% over the last 10 years and over 11% for the last 17 years.   There were times when I would have been very happy with those returns in the last few years.

But don’t take my word.  The legendary investor and founder of the Quantum Fund, Jim Rogers, in an interview with CNBC talked about his fund that is buying farmland in Brazil and Canada.  I like both countries for agriculture, but prefer the sound government of our northern neighbors.