Just when I thought it was safe to set the Hyperinflation vs. Deflation debate on autopilot, along comes Gary North with a smugly condescending essay posted at lewrockwell.com  that put my name in the headline and unspoken words in my mouth: “Rick Ackerman Defects to the Hyperinflationists Camp After 30 Years.” Not so fast, Gary. I’d still back anyone with a good deflation argument, of which there are many, and I can still take the deflationist side of the debate against you or anyone else without fear of getting pushed around. Nor will I ever be comfortable sitting in the same pew as Liro Gonzala, Jim Willie and a few other inflationistas who go “all-in” every time someone even mildly contradicts them. And just because I was impressed with FOFOA blogspot’s hyperinflation arguments is no reason to infer that I cannot find holes in them. Even he doesn’t claim to have a crystal ball, or that the debate is over. 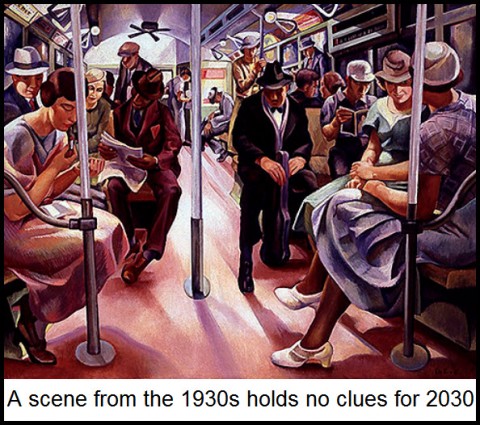 There will always be room for doubt. Take his counterintuitive assertion that the bankers who hold our mortgages would fare better in a hyperinflation than a deflation.  While deflation would likely reduce them to bag holders in a tidal wave of bankruptcies, the mere whiff of hyperinflation supposedly would set them scrambling for tangible assets before the rest of us even have time to panic. FOFOA convinced me that this is indeed plausible with a step-by-step argument much clearer than any I had come across. But even he would concede that things might not go so smoothly for the Masters of the Universe.  For starters, there’s the assumption that they will be cashed out at 100 cents on the dollar and have time to trade the money for real goods just ahead of the dollar’s collapse. Although there is precedent for this in the banking bailout agreements of the last several years, the actual “cashing out” has proceeded at the whim and pace of the political process. Who’s to say the dollar could not collapse so swiftly that there would be no opportunity, even for financiers who operate just a step or two from the central bank, to take the money and run?

Getting back to North, he writes as though I should be ashamed for having harbored deflationist thoughts over the last 30 years. In fact, they have served me well, allowing me, for one, to predict more than a decade ago a housing collapse that virtually no one else but Comstock Partners foresaw and wrote about.  Some years earlier, with every economist in academia expecting a nasty bout of consumer inflation in the wake of an S&L-crisis monetary blowout, I asserted – correctly, as events proved — that they would be flat-out wrong. I continued to insist, in my newsletter and in columns that I wrote for the San Francisco Examiner and other publications, not only that deflation was a far bigger threat, but that Alan Greenspan knew it. This is notwithstanding occasional fright-mask threats from the Fed concerning tightening to come. For instance, in July 1996, when Fed Governor Lyle Gramley said a rate hike was imminent, I headlined a commentary in my Black Box Forecasts newsletter that said, in effect, “You’re bluffing, Mr. Gramley. There’s not going to be any tightening.”

I stayed glued to that track for yet another decade, allowing me to play errorless ball predicting Fed policy over a period of nearly two decades. A think-piece on deflation that I freelanced to Barron’s in the late 1990s anticipated Professor Antal Fekete’s essays years later on the “marginal productivity of debt,” which tells us why each new dollar borrowed now by the U.S. government will produce negative growth.  In the essay, I described the Fed’s tightening camp as “friendly fire” trained on the wrong target.  Concerning my forecast that home prices would eventually fall by at least 70 percent — we’re halfway there. Want to bet against me?  And I continue to predict – like Gonzala Liro, actually, and many other hyperinflationists — that Quantitative Easing will end only after the financial system has collapsed.

In his essay, chiding deflationists as though they were either stupid or crazy, North fails to acknowledge the spectacular asset deflation that has indeed occurred. For him, apparently, inflation at the grocery store and gas pump evidently outweigh the ongoing, deflationary implosion of an $800 trillion dollar derivatives bubble.  He also asserts — incorrectly, several times –  that I have been predicting price deflation all these years.  In fact, it was asset deflation alone that concerned me — and asset deflation is exactly what we got, hitting with tectonic force even if North still seems unable to detect it.

Not that I’d ever assert that North is wrong wrong wrong, as he and a few others would me.  He’s a smart guy, a first-rate polemicist (not to mention, a fellow film-buff who has written many memorable pieces on that subject), and he probably knows as much about money, the Fed and the banking system as any economist alive. But his judgment is hardly infallible, as anyone who tracked Y2K hysteria may recall. North was arguably the most hysterical guy in America, hunkering down in the boondocks with triply redundant emergency back-ups in the event of the civilizational collapse that he was so certain would occur.  He got similarly stoked about the prospect of bird flu ending life as we know it (although I’d have to concede that the jury may still be out on that one).

In Bernanke He Trusts

Given his penchant for sky-is-falling stories, it seems ironic that North would have become a voice of moderation in discussions about the coming financial collapse.  For in fact, he foresees no collapse at all: “I don’t think we are near an era of central bank monetary stability [sic?], recession, and depression. Central bankers can still safely inflate, and they will.”  With this statement, he puts himself boldly at odds with hyperinflationists and deflationists alike – all of us ruinists, as far as I’m concerned. I feel strongly that he will be wrong, but I’m not going to pretend that we can, or should, close the door on his line of argument.

At the end of his essay North acknowledges two deflationists left standing:  Bob Prechter and Mish Shedlock.  I leave it to them to fight the good fight, since, at the moment, I’ve got far more-pressing concerns in my life than “winning” arguments with the likes of Lira and Jim Willie. In the meantime, I don’t consider myself to have switched sides, but to have allowed myself to imbibe the excellent arguments made by FOFOA with an open mind.  For now (although not, perforce, in this essay), I view myself as perhaps 55% hyperinflationist and 45% deflationist. However, the illuminating discussion of hyperinflation vs. deflation in the Rick’s Picks forum has made it clear to me that neither side holds all the cards.  Because of the cosmic sums of debt needing to be liquidated, and the fact that the dollar is the world’s sole reserve currency, it can be said that there is no precedent in history for the disaster that looms – not Weimar, not Argentina, not Zimbabwe.  Under the circumstances, the advice of anyone who claims to know for certain how things will play out should be scorned.  The safest prediction one could make is that each of us, and everyone, will prove to have been wrong in some significant way.

With all the brouhaha over inflation-vs-deflation, a reader might be unaware that the chief strength of Rick’s Picks lies not in the daily essays, provocative though they may be, but in our precise forecasts and trading recommendations for stocks, futures and options.  We track  gold and silver vehicles especially closely and our chat room draws experienced traders from all over the world at all hours of the day.  If you want to sample the full service for seven days at no cost, click here.