Gold and Silver Near a Major Bottom

Don’t let this nasty shakedown in bullion scare you. For the record, we are quite confident that gold and silver will be back on track soon, bounding toward new record highs. But both may have a little farther to fall if forecasts disseminated earlier to Rick’s Picks subscribers prove correct. Specifically, we’ve been drum-rolling a possible 1709.20 bottom for Comex December Gold, and a 35.70 low for December Silver.  As of yesterday, the latter had overshot its target by 17 cents, hitting a 34.53 low that in a single day shaved 10 percent off the value of the world’s store of silver.  Gold, for its part, didn’t quite reach the 1709.20 target, instead turning higher from 1723.20. We think the December contract’s so-far $29 bounce from that number will prove short-lived and that the futures will make an important low at or very near 1709.20 today or Monday. If so, this is likely to put pressure on Silver, perhaps pushing quotes below $35 for a day or two. In any event, if the selloff in bullion is not over already, it will be soon. 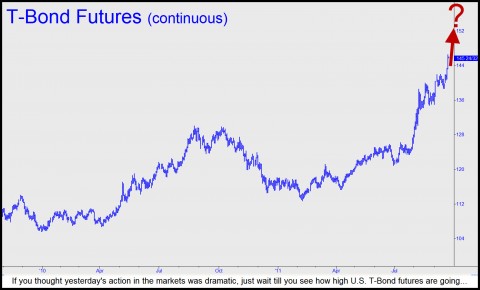 Those who follow Rick’s Picks closely would not have been surprised by yesterday’s across-the-board avalanche in commodities and currencies.  The night before, a commentary bearing the headline “Strong Dollar Predicting Europe’s Breakdown” went out to subscribers and readers. Our actual target for the Dollar Index lay well above, at 79.86, but yesterday’s explosive move came within 1.06 of hitting it. We remain confident the target will be achieved, albeit earlier than we might have expected.  If so, and the dollar’s rally has further to go, yesterday’s dramatic unwinding of the so-called “risk trade” will continue apace. How much farther?  We’ve provided subscribers with a precise target for the December E-Mini S&P futures, and although the carnage could conceivably end with a relapse today down to 1088, about 20 points (or 160 Dow points) beneath yesterday’s low, any slippage beneath that number would, from a technical standpoint, have potentially grave consequences for the near and intermediate term.  We’ve also included in today’s “Touts” section of Rick’s Picks a precise and extremely bullish forecast for T-Bond futures that if correct implies that long-term interest rates are about to fall to levels that few have imagined, at least in print. If you want to be on top of our detailed forecasts and trading recommendations, and to have access to a chat room that draws top traders from around the world at all hours, click here for a free trial subscription to Rick’s Picks — or here to receive our commentary free each day.)