A Contrarian Loads Up on T-Bonds for 2012

[Our friend and frequent contributor Douglas Behnfield thinks too many investment advisors are looking for the same thing in 2012:  rising stock and commodity prices, a weak dollar, rising interest rates and a bottom in the housing market. They’ll be wrong on all counts, he says. Instead, the enviable winning streak of those holding Treasury debt will continue.  A financial advisor and senior vice-president at UBS in Boulder, Colorado, he sent the following New Year’s message to clients last week. RA]

2011 was a confusing year from start to finish on Wall Street and the arrival of 2012 is not offering much relief. Today the popular message is that the economy is getting better in the U.S. and problems abroad can be overcome. Recession has been avoided and “escape velocity” will be achieved in the second half. Our economy can “decouple” from Europe and some of the big developing nations that have seen their economies slow such as China, India and Russia, now that they have run into trouble. Most economists and stock market strategists seem to have cut and pasted their 2011 forecast into their 2012 forecast. (How is that for the pot calling the kettle black?) But the concerns that clouded the outlook a year ago only seem to have gotten deeper. The positive messaging is focused on the following: 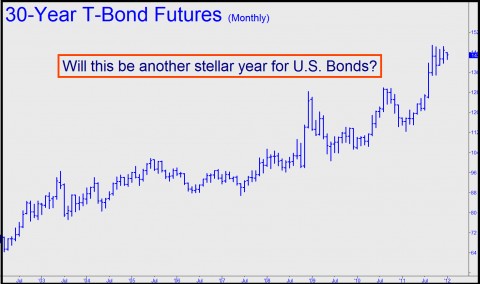 Based on the popular forecast for 2012, you can buy practically anything but long term bonds and probably do just fine as long as you are diversified. That is not the way it worked in 2011 and it seems to me to be even less likely in 2012. The S&P 500 was exactly unchanged in price for the year, providing only a 2% dividend return. It was like a video game where many aliens were destroyed and many points were scored, but it was game over on December 30 and we will had to put another quarter in on January 3.  Small capitalization stocks (Russell 2000) were down 5% and the Dow Jones Industrial Average, the home of dividend paying stocks, was up 6%. European and Emerging Market indexes generally delivered double-digit losses. They all had big swings during 2011, but the big story was how many times the stock indexes were up or down more than 1% (100 Dow points) or more in a day. It seemed like all of them.

But there was no confusion in the bond market. In 2011, the most abhorred investment vehicles, long term Treasury bonds and long term Municipal bonds, were the two best performing major asset classes. After a swoon in January, long term bonds just marched up in price (down in yield) practically without interruption for the remainder of the year. As is always the case when interest rates are declining, the longest maturity and highest quality bonds performed the best. The 2039 Treasury Strip (0% coupon bond) returned 62% in 2011 and the average leveraged Closed End Municipal Bond fund returned 21%. Closed End Build America Bond funds, which contain taxable municipals where the Federal government pays 35% of the interest, did even better with an average return of 28% in 2011. The important question to ask is: In what ways will 2012 be different and how will it be similar?

Playing by the Old Rules

As previously mentioned, the majority of pundits think that even though they missed the boat in 2011, it is only a matter of timing and it will sail in 2012. That sentiment is understandable, but the expectation that the economy is going to return to a trend of expanding organic growth and a return to the secular credit expansion lacks credibility (no pun intended). To paraphrase Bob Farrell, in the early stages of a new secular paradigm the market is adapting to a new set of rules while most market participants are still playing by the old rules. But the old paradigm of credit expansion must resume if stocks and commodities are to appreciate, housing prices are to stabilize, the government is to avoid raising taxes and slashing spending and interest rates are to rise. As disappointing as it is, a far less rosy outcome is more likely.

The magnitude of the economic reversal that occurred in 2007 has left the developed world with an enormous debt overhang that will require a very long period of time to unwind. That is why our economy has not responded very much to the enormous amount of monetary (0% interest rates) and fiscal ($1.5 trillion annual deficits) stimulus that has been delivered in the last 3 years. That is also why Europe seems to be going through a fiscal crisis similar to what we already went through 3 years ago. Austerity is engulfing the developed world.

Time to Pay the Piper

The solution to underfunded Baby Boomers on the threshold of retirement, a $15 trillion national debt (plus unfunded liabilities), bad assets in the global banking system and sovereign fiscal crisis in Europe and Japan (to name a few) is not a return to an expanding credit cycle. The solution is going to include a large dose of paying the piper, which works against economic growth. Paying down debt is a powerfully deflationary force and central bankers will be trying to cushion it by keeping short term borrowing rates at rock bottom for the next couple of years, at least.

Generally speaking, the only two economic forces that correlate to the trend in long term interest rates are Fed policy and inflation. Other than hope, there is little solid rationale for the Fed becoming restrictive or the 30-year downtrend in inflation reversing any time soon. In 2011, the yield on 10-year Treasury notes declined from 3.3% to 1.9% and the yield on 30-year Treasury bonds declined from 4.4% to 2.9%. There is a high likelihood that the bond market stages a repeat performance of 2011 in 2012, if not quite the same magnitude. Rates have declined in lock-step with inflation since 1981. In addition, a clear trend toward risk aversion and a desire to invest for income is developing among individual investors who remain generally underexposed to the bond market compared to their allocation in stocks, real estate and bank deposits.

As far as the stock, real estate and commodities markets are concerned, they all displayed an enormous amount of risk (as measured by volatility) and nothing consistent in the way of positive returns in 2011. We may not be so lucky in 2012. Financial and political pressures appear to be mounting globally and the “green shoots” displayed in some of the consumer spending and employment data of late here in the U.S. have not been accompanied by improving household finances. The savings rate has come down and household income has not kept up with what little inflation we have experienced.

I won’t go into real estate or commodities here, but as far as stocks go, profit margins appear to be peaking along with profit growth and global trade is at risk of succumbing to increased protectionism. “Dividend paying stocks” are tough to argue against, but two quotes come to mind. The first is Bob Farrell’s Rule #9; “When all the experts and forecasts agree, something else is going to happen.” The second is from Yogi Berra; “Nobody goes there anymore, it’s too crowded.” Think Intel or Microsoft in 2000. The story was right but Intel still dropped from $76 per share to $12 per share. Back then, the fact that they did not pay a dividend was a reason to buy: they were retaining all their earnings to power their growth. I like hamburgers as much as the next guy, but at $101 per share up from $60 two years ago and yielding less than 3%, McDonald’s seems risky.

All that being said, interest rates can only drop so much. David Rosenberg, who was one of the few who got the call right on interest rates for 2011, expects the 10-year and 30-year Treasury yields to dip below 1 ½% and 2%, respectively in 2012.  A decline of that magnitude would deliver substantial total returns at the long end of the Treasury market, though not quite as great as the 2011 return. If we see 2% on the 30-year Treasury bond, that may be the end for the Great Bull Market in Bonds that began in 1981. On the other hand, long term investment grade municipal and Build America bonds offer yields near 5% and the leveraged closed end funds that invest in them yield between 6.5% and 7.25%. It would seem that demand for those vehicles should remain strong in 2012, barring a severe reversal in municipal credit quality, which has been on the rise in the past year. Municipal bond issuance is down substantially from years past, restricting supply.

Along with all the uncertainty that we face in the coming year, investment risk appears to be mounting. Our current asset allocation seems appropriate considering the deflationary risks that we have identified. I remain very concerned about avoiding dogma and overstaying our welcome in this defensive strategy. However, preservation of cash flow and preservation of capital are the most basic investment objectives for those of you who have accumulated substantial wealth. In the meantime, we have enjoyed excellent absolute and relative performance, particularly on a risk-adjusted basis, in 2011.

I hope that you will share this information with friends, family and associates. Many investors are very confused about how to position their portfolios and could benefit from at least being exposed to our perspective.