Although yesterday’s Congressional testimony by “Helicopter Ben” Bernanke was fundamentally meaningless, it caused gold and silver prices to take a spectacular dive. They got hit after the ‘Nank, prevaricating as usual, said the central bank wasn’t rushing to crank up a QE3 stimulus.  While this may be true as far as it goes, it belies the fact that the money spigots have been wide open for years and will remain so, probably, until the financial system collapses. More on that below.  Concerning the savaging that precious metals received, they are all but certain to recover, since the forces that have been driving them steeply higher for more than a decade are still very much in place.

Even so, it could take at least a few weeks for gold to build a new base for a shot at $2000, and silver for a push into the mid-$40s. In the throes of yesterday’s brutal, deftly engineered shakeout, Comex gold dropped $104, or nearly six percent, in just a few hours. The April contract hit an intraday low of $1688 after trading as high as $1793 the day before. As for Silver futures, they suffered their worst single-day loss since September, falling $3.76, or 10 percent, from intraday high to low. Mining stocks fell in sympathy, lopping three percent from the value of the Gold Bugs Index (HUI) and five percent from GDX, an index that tracks the shares of junior miners. 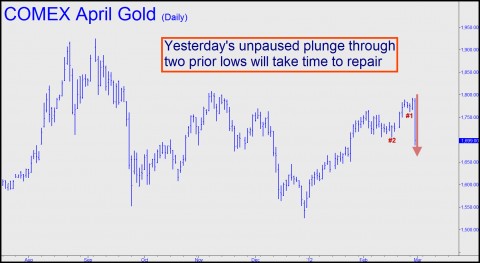 Although Silver futures fell harder than gold in percentages terms, the technical damage was worse in the latter. Notice in the chart above that April Gold’s plunge exceeded two prior lows on the daily chart. This created a bearish “impulse leg” of daily-chart degree, according to our proprietary Hidden Pivot Method of analysis, and it is the worst such damage we’ve seen since December. Silver, on the other hand, did not exceed even a single prior low on its daily charts, although the move was decisively impulsive on hourly charts. It remains to be seen whether silver’s relative resilience will pull gold back up, or instead, silver gets dragged lower by gold. [Click here for a free trial subscription if you want to sample our round-the-clock analysis, updates and detailed trading recommendations.]

So what else did Helicopter Ben say?  Most crucially, as far as the financial sociopaths on Wall Street were concerned, he “stopped short of signaling further bond purchases,” reported Reuters. In Wall Street-speak, this means there will be no “QE3,” at least not in the foreseeable future.  Of course, it will not have dawned on his Capitol Hill inquisitors, nor on the morons who bring us the news, that the Fed is already running the loosest monetary policy in the sordid history of central banking.  How else could T-bill yields be running close to zero, even as long-term rates fall toward 2%? Do the aforementioned sociopaths and morons even understand that virtually unlimited quantities of money are being made available by the Fed to the European Central Bank at almost no cost?  Evidently not.  In any event, gold and silver dove yesterday as though the West, China and Japan had embraced Greek-style austerity. Yeah, sure. If you are so foolish as to believe the Fed is moving away from stimulus, there are plenty of investors eager to buy your gold and silver at distress prices.