How High Can the Fed Pile Manure?

A U.S. banking system that is being held aloft solely by hot air and brazen lies took an ebullient leap toward November 6 yesterday with the release of an Administration-friendly Fed report declaring most banks sufficiently capitalized to weather severe adversity.  How severe? It’s hard to tell, since there were only passing references in the New York Times to a still-deflating housing market that has helped make The Great Recession and a plummeting standard of living an entrenched fact of life for most Americans, if not for their bankers. And nowhere in the front-page article was there even a word about the Fed’s warehousing of trillions of dollars’ worth of mortgage paper once held by the banks – debt paper that might never recover in value.  Under the circumstances, far from being healthy as the Fed and its shadowy masters would have us believe, the banks are afflicted with the financial equivalent of stage four cancer. Not that anyone on the Street would care to notice. In fact, with this week’s big stock market gains, Wall Street seems to be literally banking on the ability of the spinmeisters to hide the financial system’s deathly pallor with the skill of Sonny Corleone’s mortician. 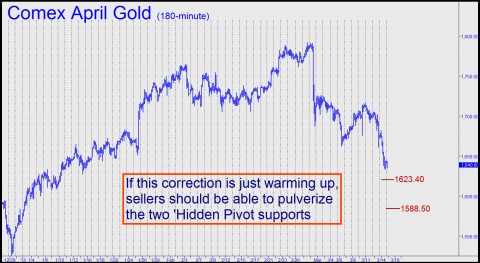 In the meantime, many on the Street, and even a contributor or two in the Rick’s Picks forum, were seeing cloudless skies at least till the election. “Money is going to be pouring into the stock market at the expense of other investments,” noted one forum regular, Gary L. “I now see the possibility of a 20 percent rise in the stock market year over year,” he continued. “If external factors don’t derail this trend, we are in a perfect sunny day lasting perhaps another nine months. This will make Obama’s chances of winning re-election an odds on favorite.”  We’re not so sure ourselves, especially since the real economy that most Americans encounter in their day-to-day lives is wholly different from the sunny illusion being spun with increasing brazenness by The Powers That Be.

And while it’s true that gold and silver futures got sacked yesterday, we see the weakness as merely corrective rather than impulsive. Even conceding that bullion could remain under pressure if our own, extremely bullish forecast for the dollar pans out (click here to access all of our forecasts free for a week), we very strongly doubt that precious metals have seen their bull market highs. And keep in mind that the dollar is not “strong” in the sense of being sound; rather, it is in demand because global managers of Other People’s Money believe it will be the “last man standing” when Europe’s inevitable financial collapse occurs.  We agree but only up to a point, since it’s quite possible the smart money may only have an hour or two to react  to Europe’s implosion before it takes the dollar and all of our banks down with it.

Continuing with the sunny observations of Gary L:  “Inflation tame, import and export costs low, a recession in EU and China, wages tame, domestic spending up along with debt. Looks like the old patterns are coming back.”  Although Gary has proven himself to be an astute and flexible observer of the markets in the past, we think his optimism is misplaced — like looking at Europe in the early summer of 1914 and remarking on the robust health of Germany’s manufacturing sector.  If inflation seems tame, as he notes, it is only because the counterforce, a nearly quadrillion dollar derivatives bubble, is poised to deflate catastrophically if the central banks ease off the monetary throttle even slightly. As for Europe’s deepening recession, it adds force to the already deflationary impact of austerity measures taking root in a growing number of zombie nations. As for the sharp selloff yesterday in precious metals, if it eventually takes gold down to $1500, we would view that as the last great buying opportunity before the metal leaps to $2000 and beyond. (Please note that, from a technical standpoint, we’ll be looking on Thursday for at least a tentatively bullish turn from well above that level – specifically, from 1623.00, basis the Comex April contract.)

As bearish as we are on the big picture, we can only marvel at the scripted perfection of recent, ostensibly bullish, economic “news.” For starters, a couple of banks were reported to have failed the stress test — including, most notably, Citi.  Clearly, this was meant to mollify skeptics who might have dismissed the report if no banks of size had gotten an “F”.  Also, the Times, using talking points presumably planted by the Fed itself, inserted this red herring into the article: “Another potential shortcoming in the tests is that they don’t focus on one of the main problems the industry faced during the financial crisis, the difficulty banks had borrowing money in the markets.”  In fact, and as everyone knows perfectly well, there is no limit to the amount of “money” that problem banks will be able to borrow from the Fed the next time TSHTF.

Not that unlimited borrowing power is going to do the banks any more good than it will Europe’s when their hour of reckoning arrives. At that point, it is credibility with the public that will matter, not borrowing power. Unfortunately, what little credibility remains — evidenced by the stock market’s maniacal response to the latest Fed dog-and-pony show — is destined to be squashed as the central banks and politicians continue to pile up bald-faced lies one on top of another.