Europe’s bankers will need to think really big the next time they try to construct a proper “mother of all firewalls.” A nearly trillion-euro package that was on the table a few weeks ago would combine €440 billion of uncommitted funds from an existing credit “facility” with  €500 billion pledged toward a new one. Those may sound like big numbers, but they evidently were not big enough to prevent market forces from roiling Europe’s stage-managed bond markets last week. The result was a surge in yields on Spanish debt  that spooked U.S. stocks, among others,  into their worst weekly decline of 2012. 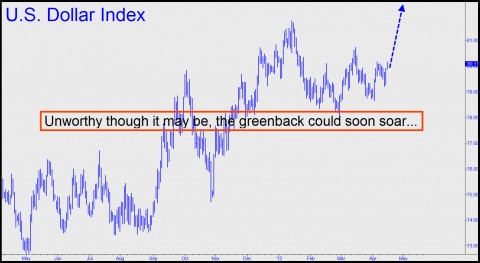 Although the world’s bourses had celebrated in the weeks leading up to and immediately after the February bailout of Greece by central banking’s wizards and alchemists, stocks have been falling steadily since the beginning of April. Clearly, the specious extravagance of a trillion-eurofund doesn’t buy much peace of mind in financial circles these days. That’s notwithstanding the obvious fact that the countries charged with funding the “facility” would have to pony up only a small fraction of the marquee sum. As much should be clear to all the players, since even the ostensibly solvent likes of Germany, Holland and Finland don’t have that much good money to throw after bad, nor the will to import austerity by-the-empty-truckload in support of a doomed euro and a bunch of sovereign deadbeats.

For their part, U.S. stocks looked dismal last week, with the Dow off 1.6% and the S&Ps down 2%.   However, such relatively mild selling may prove to be just a warning tremor if Europe’s debt crisis is about to return to the headlines.  On Friday, investors’ fears ratcheted into the red zone when it became apparent that a tidal surge of borrowing from the European Central Bank had been necessary to keep Spain’s banks afloat in March.  And where were private lenders in Iberia’s hour of need?  It would appear that they deserted the country in droves. As how could they not have?  Would you lend money to Spain? We surely wouldn’t. Suppose the central bank gave you money to lend to Greece, and it came with few strings attached and at almost zero interest.  Hard to lose, right?  Not exactly. Just ask those who loaned to Greece on the assumption that the country would never be allowed to default. Although a default was indeed postponed, bondholders had to walk the plank before any further public sums were advanced cash-strapped Athens.

Some actual pain was necessary, since Greece’s already unruly mobs would never have stood for letting the banks off the hook yet again with only nominal losses. Recall that late last year, in the throes of a middling eurobailout valued in the low hundreds of billions of dollars, the actual exposure of private banks was revealed to be around $10 billion. Those days are over, apparently, and with them the popular delusion that moral hazard can be stretched to infinity.

In the meantime, the ECB and the Fed continue to work tirelessly to promote the deception that market forces are being allowed to work. Only the news media would buy into such a laughable story — and even they wouldn’t be fooled if Europe’s banks had been required to “lend European.”  True, the alternatives are not exactly appealing, since it comes down to either 1) paying 50 basis points per annum to park excess cash with the ECB; or, 2) deploying said excesses in U.S. and German paper despite niggardly yields.  Understandably, the banks have chosen pragmatism over pan-european solidarity.   But if they should continue to do so, effectively favoring safety over yield, we should expect Europe’s steadily deepening crisis to take a turn for the worse. Although Treasury debt and the U.S. dollar would benefit directly from this, investors would be mistaken to infer that a rise in the value of U.S. paper portends America’s imminent return to economic health.

For seven days’ free access to all of our services, including detailed daily trading recommendations and a 24/7 chat room that draws traders from around the world, click here.