Think You Can Outrun a Global Flash Crash?

It was while under the influence of LSD that a childhood friend of ours decided to end a promising career as a commodity trader.  He was buying and selling pork belly contracts at the time but dropped acid one day hoping to gain valuable insights into the markets — insights that presumably lay beyond the grasp of rational thinking.  Chuck had insights all right, but not the kind he’d expected.  Instead of having potentially profitable spreads, combos, strips and straddles leap out at him from his trading monitor, his febrile mind was overwhelmed by images of the slaughterhouse — of 400-pound sows dripping blood from a conveyor belt. The experience was cathartic enough that his next job, announcing professional basketball games, was as far from the feedlots and butcheries as he could get. 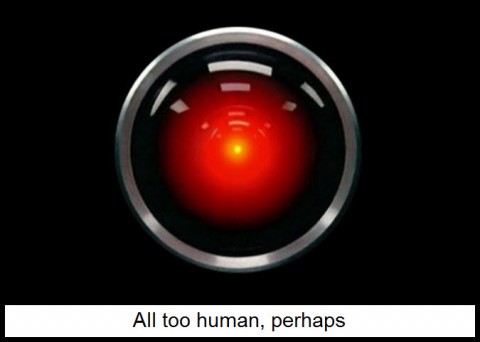 We mention this because market-watching has become all-too-abstracted for us lately as well. Ponder the whys and wherefores of the stock market for too long and you begin to believe that investors are being led, one rally at a time, to the slaughterhouse.  Or so it would seem. Europe’s bailout, for one, is a hoax that can only end badly for us all. And the torrent of lies that have kept the U.S. out of statistical recession are so egregious that a bust of 1929 proportions could occur literally overnight and at any time.  As we know, the mindless herd can have epiphanies just like individuals. Except that they are called panics. And yet, stocks continue to ratchet higher most of the time, pausing only long enough to allow sector rotation and the orderly flow of money in and out of the flavor-of-the-week asset class.

We’ve Had Our Warning

Someone in the Rick’s Picks forum described this yesterday as musical chairs, and we would agree. The remark was in response to a post by a regular poster who evidently believes he’ll know when it’s time to exit the stock market. Although he had asserted that there have always been warning signs in the past, we don’t recall any such signs prior to the May 2010 Flash Crash. Some traders we know have bragged that they saw the October 1987 crash taking shape that summer, like dark cumulus clouds on the  horizon.  But did they really? We doubt it. In point of fact, crashes occur because few have noticed or heeded whatever warnings signs were there to be observed.

To those who may be looking for the next warning sign, we would say: The May 6 2010 crash was your warning. That infamous event saw the Dow Industrials plunge 1000 points, or nine percent, only to recover the entire loss minutes later. Much as we’d like to believe that someone flipped the wrong switch, a crash of that kind could have occurred only because the electronic trading network itself had gone HAL-9000 wacky. And so it is with, not just the stock market, but the entire global financial system. It has been hard-wired to panic at ten-thousand times the speed of humans. And it therefore will, eventually.

Any trader or investor who is counting on beating HAL to the exit, or on a do-over once The Powers That Be have sorted things out, richly deserves to reap the whirlwind.