Is Fear of Deflation Sapping Gold and Silver?

There’s no point in pretending it’s those sleazy, child-molesting bullion bankers at Morgan Stanley, Goldman Sachs and  J.P. Morgan who have been pounding on mining stocks and bullion futures in the last few months.  Lately, it has felt like the whole world has been dumping them.  For the record, we are ourselves cautious buyers of bullion futures and select mining stocks at these levels, since many popular trading and investment vehicles that we track are closing on important Hidden Pivot correction targets. (Want to find out the exact prices at which were are doing the buying? Click here for a free trial subscription to Rick’s Picks, including real-time guidance and a 24/7 chat room where the discussion never stops.)

When bottom-fishing in markets that have been falling as steeply as gold and silver have been falling, we recall the advice of our friend, the late Malcolm Watts: “When attempting to catch a falling piano,” Malcolm, a PSE option trader and gifted technician, used to say, “wait until it has bounced three times.” (It was not a falling piano that felled our friend when he was in his thirties, by the way, but the stresses of the market on an apparently defective heart.)  So, have bullion futures bounced the required three times yet? By our count, there have been more like four bounces since February. And although that may not mean it’s perfectly safe to buy the precious-metals complex at current levels, it does imply that those who waited are happy they did. 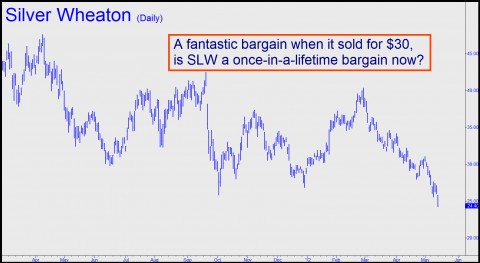 By and large, however, precious-metal bulls are probably feeling shell-shocked by now, since many of the stocks that they hold dear  – quality companies like Silver Wheaton, Newmont and Yamana – have been sold nearly to death.  The shares of these firms and many others looked like great bargains when the were trading 35-40% higher, so just imagine what kind of bargains they are now. Even so, we’ve always preferred to do our own buying at promising levels, but with tight stops each step of the way, rather than by averaging down.  Using the latter strategy, it’s hard to imagine that any gold bug would still be solvent. The saying “keep your powder dry” may not even apply to bullion bulls, since gold and silver are their dry powder.

Europe, then the U.S.

So what is weighing on bullion, if not the nefarious designs of the bullion bankers? It’s possible that the deflationary implosion of Europe may be a factor — and perhaps the prospect of one even worse in the U.S.  The hyperinflationists talk about QE3 and a torrent of new money flooding into the markets to save the day. That would be extremely bullish for gold and silver, for sure. But in point of fact, the massive monetization has yet to come. Moreover, there are reasons to think that even if it were attempted, it would crash the markets before the presumptive trillions in new credit-money could find its way into the banking system. This is the deflationary scenario we have written about before: a banking collapse that occurs so swiftly that the effects of QE3 are negated by skyrocketing yields for private debt. Peter Schiff says the central banks will start monetizing all institutional debt at that point, triggering a hyperinflation. But what if not? It seems plausible the banks would then shut down and the economy would plunge instantly into deflation.

Is that why gold and silver have been taking such a beating lately?  We’ll concede that a hyperinflation lies somewhere down the road, since sovereign debt will have to be retired in some fashion. But perhaps bullion is telling us that, more immediately, the central banks lack the guts to go all-out in their effort to hold deflation at bay. Either that, or investors think it may no longer be possible to do so.