Treading Water on a Sea of Funny Money

[In the guest commentary below, Erich Simon sees Quantitative Easing as the death rattle of the U.S. economy. Americans will be taxed just to stay afloat as the financial system edges toward a seemingly inevitable day of reckoning. And although the gold coins you’ve socked away will probably be easy to barter in very hard times, they will not save the day for a global economy that can be brought back into balance only by a violent wrenching of the gears. RA]

In the good old days, before Quantitative Easing was used to “stimulate” the economy with printing-press money, bank loans were invested with the goal of producing sufficient profits to retire the loans. Sound investments produced profits, and society advanced — both fundamentally through the creation of new businesses; and economically as a result of new jobs created and the wealth-multiplier effect. Money remained sound, and its desired property as a store-of-value was affirmed.

But we are no longer in a growth economy. Rather, the economy is akin to a mature and declining product life-cycle. We have squeezed the final drop from the last technological apple plucked from the tree of the Industrial Revolution. The Green Revolution is similarly over, leaving behind state-sized swaths of barren, cracked and salt-encrusted clay, growing nothing more than the next generation of genetically modified Soylent Green. Inventions like penicillin have all been fully exploited. The latest medical breakthroughs, to fight cancer mostly, consume prodigious resources. The dot-com boom was the grand finale, an essentially frivolous exercise in non-productivity masked by its supposed social “contribution.” 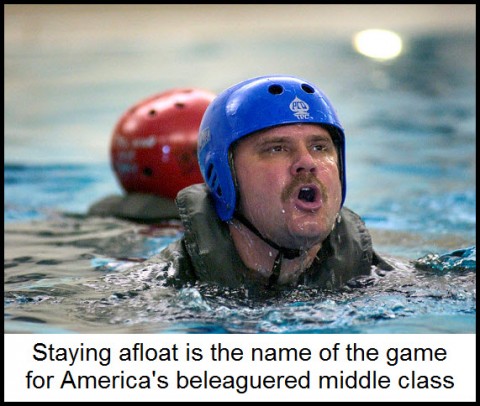 After the predictable March 2000 crash, the winds of deflation began to blow, so that we now find ourselves in the throes of a terminal unemployment hangover. Today, we are a crowded, resource-depleted quagmire, a sea of unproductive participants sloshing in tank whose only sustenance comes from rebellion and revolution, taxation, reapportioned or strong-armed from the remaining pool of contributing participants (Government is surely not one of them). There simply is no other way to funnel and requisition necessities, let alone the hollowed luxuries, of our fading lifestyle.

As for “money,” it remains a tangible representation of what we produce. Ideally, it should exist in a quantity that is commensurate in value not with frivolous goods and misallocations, but with goods that add something of indisputable worth to the economy.

As long as what we produce has value, then our money will have value. When what we produce has little or no value – i.e., when it is squandered on grandiose public works projects, the repaving of roads and bridges that are in no disrepair; or worse, the costs of repairing the destruction from wars — then money becomes a drag on the social balance sheet. Which is to say, it loses its value. If the socioeconomic ship is headed over the falls, if there is no meaningful production amidst a hostile economic environment, then money turns into an entitlement coupon, like a food stamp. Like it is today.

Your Government at Work

Thus have money-printing and QE become the main ways that government now allocates dwindling natural resources.  This is a tail-chasing frenzy, trying to tinker with the social draw. A potentially bright economic future is being supplanted by Nationalism and police oversight, then by the military state. The vessel is indeed going over the falls, and nothing can save it — not even gold.

Gold and silver had their place in history, backing up “’money” before an evolved society could collectively guarantee it. Gold-backed money ensured fair and equal access to scarce natural resources. Gold will never recapture its role as “money” because of its role in today’s economic dilemma. Although it can be easily bartered because it is perceived as valuable, this will not buffer the financial cataclysm ahead, when international accounts are forced into balance. Gold would probably be hoarded anyway, since, at this late stage, it is every man for himself.

During the vast dishoarding of wealth that lies ahead, as the American Dream gets downsized beyond what anyone might now imagine, we should expect The Government to seize and redistribute assets according to whim. This must be done to keep the peace, and it will continue for as long as we can tread water inside the QE tank. How long that will continue depends on the Fed’s aggressiveness in rescuing whoever and whatever needs to be rescued.  The rescue coupons we receive from The Government will serve as claims against what wealth remains. With no savings to cushion hard times, deflation will continue to eat away at that wealth, impoverishing us all as we adjust to the collapse of necessities.

Trading stocks, options and commodities in these treacherous times calls for great patience and skill. Click here if you’d like to see how Rick’s Picks approaches the challenge.