A Dark Vision of Things to Come

[ Erich Simon, author of jeremiad below, is a hard-core survivalist and the second most bearish person we know, out-doomsdayed only by a Nostradamian pen-pal who believes, for starters, that two World Wars will be fought within a generation.  Although we shudder to imagine a world in which all of Erich’s predictions have come true, we do not think his fear is misplaced that Americans will awaken one morning to learn that the banks have closed indefinitely. Our suggestion is that you keep a shoebox filled with $1s, $5s, $10s and $20s for that day, since “plastic” will be useless.  Much more elaborate preparations will be needed, however, if you share Erich’s very dire outlook. RA]

The financial vultures are all around.  Things took a sharp turn for the worse three years ago, when a wave of store-closings turned strip malls across America into eyesores.  In just one year, 42,000 manufacturing businesses in the U.S. closed shop. But the recent announcement by the Fed that it would “buy” $40 billion of mortgage-backed securities every month was a defining moment. What can it hope to accomplish?  Printing-press money no longer subsidizes anyone but fat cats – corporate VIPs who can flee in their Learjets to the Southern Hemisphere when troubles that have simmered for years finally reach a boil. 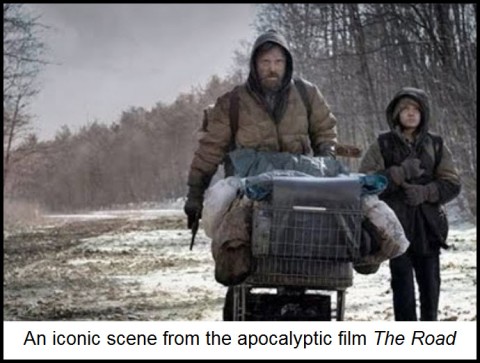 A generation ago, it took $2 of debt creation to generate a dollar’s worth of GDP. Then it took $5…and then $7 before Obama pushed the number off the chart.  Now, there is no longer measurable growth relative to each new dollar of credit “stimulus.” In fact, despite all the QE Bernanke can gin up, the economy is sliding backwards. Production is contracting and unemployment is poised to take off, even as new hires take jobs that will never pay them anything close to a living wage. The young are beyond disenfranchised: They are desperate and forlorn. We have reached the point where every newborn faces worsening odds of accumulating wealth to pass on to descendants. So much for the American Dream.

As for the global economy, it is slipping into a synchronized downturn that will make it far more difficult for the mass of newcomers to attain wealth.  The economy is past the point of inflection, nearing exponential collapse: currency, debt, food, energy, water, infrastructure —  all of it. That’s why there are so few jobs remaining. And The Government knows it. They understand that we are now a two-tiered population of haves and have-nots, as Bernanke acknowledged a year ago, with the have-nots skirting subsistence. This is the endgame of an economy based on credit and consumption: a slave class living from paycheck to paycheck; a middle class turned into federally subsidized debtors; and a shakeout, since 2008, of the top 1%, including the super rich (CEOs) and the ultra rich (dynastic property hoarders with dwindling cash flow).

It is at the level of the top 1% that the economic battle has been raging as the super rich, living off debt and beyond their means, fight to keep up with the ultra rich, even as the other 99% gets left in the dust, unable to sustain themselves.  Stressed to the breaking point and exposed to random violence such as the recent, homicidal spree at a Colorado move theater, they are suffering from a kind of profound mental fatigue. The economy, meanwhile, is completely hollow now. The Invasion of the Economic Body Snatchers is complete, with the U.S. evolving into a Third World Police State and the banks set to reclaim all real estate everywhere amid a epic upheaval of social restructuring.

We will awaken one day to learn that the banks have closed, perhaps never to reopen. This has seemed inevitable since the events of 9/11 altered the rhythms and routines of the U.S. economy. The banks may even be torn down, burned in effigy of a system that destroyed us all and enriched the thievery of the greedy and militaristic few, turning frontier dreams of prosperity into a dictatorship ghetto.

We are close now, very close. Every business I come in contact with is on the ropes – most recently, a corporation with rental properties in three states that has been deluged with vacancies and collection notices. There’s my medical insurer, which has taken nearly two years to pay a claim related to a shattered shoulder. Even worse, there are scam artists everywhere, and all too many businesses adopting flim-flam tactics. Meanwhile, prices for necessities continue to rise, fueling even more desperation on the part of businessmen.  It reminds one of the imploding USSR, where, corruption was pervasive and riches went not to the doctor or dentist but to political overlords.

Like the Titanic, the economic ship is going to sink in a matter of hours. I’d bet that speeches are being scripted in preparation for this. We are that close. (Over the last decade or so, the Christmas holiday season has been squeezed into a shorter, manic shopping spree that has come to resemble a rush hour in the last couple of days.) One should expect gunfire from lone wolfs and organized groups in proximity to the upcoming bank holidays — quite literally men not just without futures, but without their next meals.

Things are going to get bad, and soon. The financial scavenger-vulture “bartenders” who short-change customers and swipe dollars off the “bar” are not the social disease, they are the symptom. The disease is a Fed misallocation of credit that has corrupted the economy, and with it the entire social order. The money-printing disease augurs a bottleneck of…everything.  We are facing a technological exploitation of a finite habitat overrun suddenly by a population blowoff. That is what everyone is preparing for, skimming and stealing across all levels of all businesses — a currency grab in the final hour, just before the dash for the exits, a mad scramble to buy safety and survival for themselves and their families.

A member of my survival group, an Army Ranger sniper who retired after nine years’ service, has dug a hollow in the forest behind his house and fortified it with clothes, guns and food for his wife and two young children. I thought that it was to protect against civilian marauders. Imagine my surprise when he told me it is to protect against our own military. According to his sources who are still in the service ( in what is a very youthful military/National Guard), plans are being discussed that would have soldiers and Guardsmen go door-to-door confiscating food, wealth, guns, etcetera — all in the name of national security. Redistribution to keep the peace. Or is it going to be mostly spoils to weld soldier loyalty? The more things change, the more they remain the same.

Click here for a free trial subscription that includes not only access to two 24/7 chat rooms that draw veteran traders from around the world, but also real-time trading alerts via e-mail.