Why Even Talk of Tightening Could Be Fatal

Repeat after us: There is zero chance the Fed is going to tighten…zero chance…zero chance…zero chance.  We’ve made this point so often here that it is has practically become a mantra at Rick’s Picks.  It has also been amplified, refracted and explicated – though not hotly debated – in our forum, where there are apparently few who expect any change in Fed policy. As how could there be?  For even the slightest hint that easing is about to taper off, let alone end, would bring on the Second Great Depression faster than you can say “Hooverville!” The prospect of hard times might have superficial appeal, since the legacy of the 1930s with respect to art, architecture, cinema, public works, automobiles and other monuments to creativity and human endeavor is quite impressive. But the downside is that the illusion of prosperity would be gone, and with it much false wealth that could never withstand the discipline of unrigged markets.  Also gone – overnight – would be the global banking system, buttressed as it is by a nearly quadrillion dollar edifice of hyper-leveraged derivatives.  Subject that sum to even a few more basis points of vig and you’re talking about trillions of dollars that would have to be coughed up in real money. Fat chance. 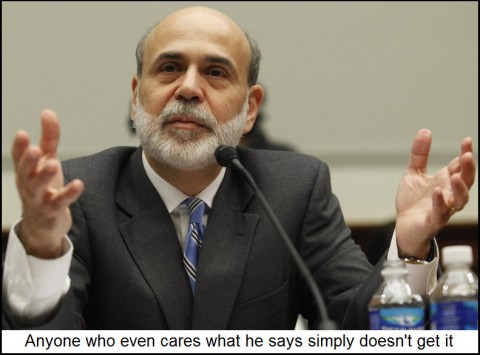 The foregoing is in response to a CNBC story out Tuesday evening under the headline Bernanke Expected to Deliver Dovish Message.  This is about as dog-bites-man as news gets – a space-filler intended to pump up the press-release version: Bernanke will testify before Congress today.  Here’s the opening paragraph:  “Federal Reserve Chairman Ben Bernanke is expected to maintain his dovish tone when he speaks to Congress Wednesday, and he is likely to dispel any notion that the Fed is ready to cut back on its easing policy.”  What puzzles us is the matter of whether such a notion even exists – not just on Capitol Hill, but in editorial rooms where stories like this originate. Of course, political calculations will naturally be biased toward easing until the cows come home. But there are also economic factors to be considered, such as: Won’t all of this easing eventually lead to really bad inflation?  This fear is misplaced as far as we’re concerned. More likely in our view is that there will be no “process” of inflation to reckon with, but rather a hyperinflation that comes on so swiftly as to steamroller whatever puny remedies might be tried.  In the meantime, deflation will continue to rule the global economy, since, as Margaret Thatcher famously warned, the statists have in fact finally run out of other people’s money.

While we await the global economy’s all but inevitable collapse, one thing we absolutely need not fear is that the Fed will stop easing.  And if the central bank should make the serious mistake of trying to cut back slowly on monthly bond purchases that currently total $85 billion, be prepared for the markets to reject the experiment with such violence that even the likes of CNBC will finally understand that tightening, or even merely talking about it, will by then have become quite impossible.