With Lawrence Summers out of the race by his own choice, Janet Yellen looks all but certain to succeed Helicopter Ben Bernanke as chairman of the Federal Reserve. Do you have any advice for her? That is the Question of the Week, and we are encouraging all who post on the topic to speak freely. Scholarly citations from The Creature from Jekyll Island will be especially welcome. Personally, we doubt the choice ever mattered, since the Fed was designed by the Banksters as a self-perpetuating scam that can steer itself as competently as Google’s driverless car — albeit with the help of such useful idiots as Paul Krugman, the U.S. President (whoever he is) and the editorial boards of The New York Times and The Wall Street Journal, all of whom have either implicitly or explicitly endorsed and/or helped to perpetuate such nefarious schemes of the feather merchants as Quantitative Easing, fractional-reserve banking and, of course, central banking itself. 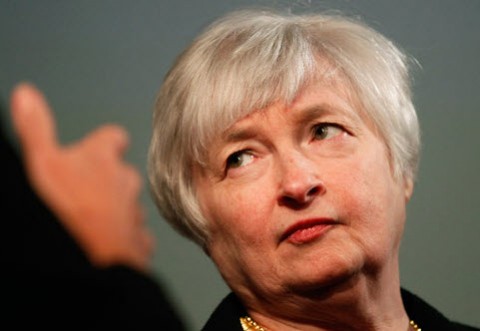 Summers was widely perceived as the monetary hawk, Yellen as the dove – a divide with implications that were underscored by the exuberant leap gold and index futures took Sunday night on the news concerning Summers. The hawk/dove thing really boiled down to Tweedle-Dee or Tweedle-Dum, though, since neither Yellin nor Summers – nor Joe Blow, for that matter – will have any flexibility in maneuvering interest rates. How could they when every uptick in real rates brings the global financial system’s quadrillion dollar Ponzi scheme an inch closer to collapse?