A Few Simple But Powerful Ideas for Investors

[The thoughts of Colorado financial adviser Doug Behnfield have been featured here many times in the past. Doug is not only the hands-down smartest investor I know, he is one of the smartest guys I know. In the penetrating essay below, prepared for clients, he reflects on the timeless wisdom of two towering figures in the investment world: Nathan Rothschild (1777-1836), a second-generation scion of the European banking family; and friend and mentor Bob Farrell, Merrill Lynch’s chief stock market analysts for 25 years and a pioneer in sentiment studies and market psychology. RA]

Nathan (Baron) Rothschild was one of the most respected and successful investors in the 19th Century and when asked how he became the richest man in the world he responded: “I never buy at the bottom and I always sell too soon.” Bob Farrell, Chief Market Analyst for Merrill Lynch for most of the back half of the 20th Century, is one of the most respected market analysts alive today (and a personal friend). He gave us “Market Rules to Remember” in 1997 and I have always considered them to be sacrosanct.

Rothschild’s comment is somewhat counterintuitive in that one might expect the richest investor in the world would buy at the bottom and sell at the top. But what Rothschild was advocating was avoiding the market at extremes in order to minimize the destructive forces of fear and greed by trying to invest in the middle of the trend. The chart below is a graphic depiction of Rothschild’s methodology. In this example, buying occurs only after it seems apparent that the bottom is behind us, whereas selling is done with the assumption that money has intentionally been “left on the table”. 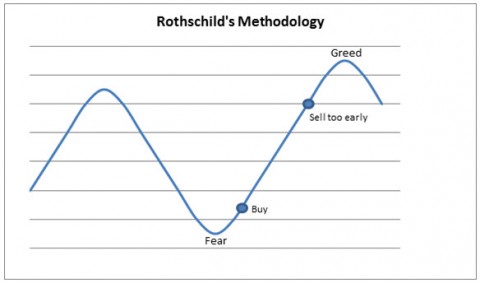 Based on this approach, this next chart of a closed end municipal bond fund (CXE) would appear to be at a reasonable buy point. 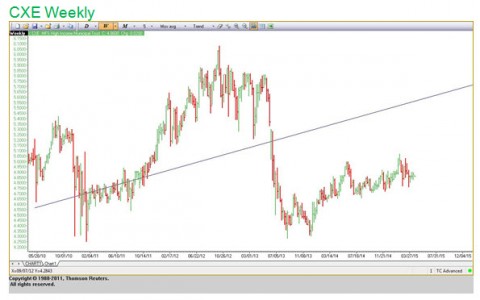 Like Baron Rothschild’s rule, many of Bob Farrell’s ten rules challenge conventional wisdom and encourage avoiding extremes. Successful investing usually requires a form of contrarianism that overcomes the blight that normal human nature brings to investing in a volatile environment. (The concept of “Buy and Hold” investing is another story, but suffice it to say, that strategy exists more in theory than in practice.)

1. Markets tend to return to the mean over time.

2. Excesses in one direction will lead to an opposite excess in the other direction.

3. There are no new eras – excesses are never permanent.

4. Exponential rapidly rising or falling markets usually go further than you think, but they do not correct by going sideways.

5. The public buys the most at the top and the least at the bottom.

6. Fear and greed are stronger than long-term resolve.

9. When all the experts and forecasts agree – something else is going to happen.

A careful interpretation of this next chart of the S&P500 stock index, from either Rothschild’s or Farrell’s methodology suggests that it could be a sell. Unfortunately, that could have been said at any point over the last several years. The S&P500 had doubled off the 2009 lows by early 2011 and has not had so much as a 10% correction since later that same year. 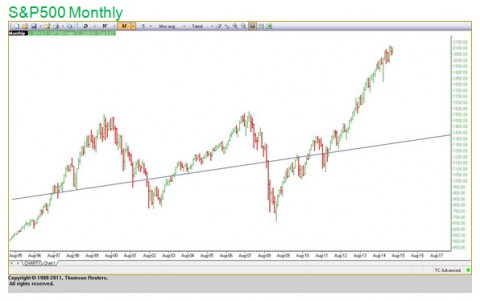 All ten of Farrell’s Market Rules to Remember are important, but rules one through four are closely linked to Rothschild’s message because they provide important insights into the cyclical price movements that are a continual feature of the market landscape. I have drawn a somewhat arbitrary uptrend line through this and the remaining charts to represent the “mean” that Farrell’s most important rule (Rule #1) refers to. For the last 20 years, the price extremes above and below the mean have been far greater (particularly in stocks) than most of the 100 years prior, with the exception of the period surrounding the Great Depression. And the fact that these extraordinary swings have occurred so repeatedly and consistently over the last 20 years makes it that much more valuable to have some framework for how one thinks markets really work.

‘No Matter How Delirious…’

Rule #1 states that, regardless of whether you are above or below the mean, you will eventually get back (revert) to it. Rule #2 states that mean reversion requires two extremes. Rule #3 reminds us that no matter how far something gets priced away from the mean, no matter how delirious we all get, Rule #1 is inviolate. Ferraris and Warhols will get hammered someday. So too will the stock market. And finally, Rule #4 (my personal favorite) has two important messages for the type of exponential market moves that we have witnessed so often over the last 20 years: First, extremes in market prices go further than you think (I have often been the poster child for that). Second, they do not return to the mean by virtue of the price flattening out for some very long period of time waiting for the mean to catch up. They rip to the upside after they have abruptly plummeted and they crash after they rocket straight up. From the perspective of Rule #4, the current stock market is about as scary as it gets.

In contrast to the 20-year chart of the S&P500 above, this last chart of 30-year Treasury bond yields going back the same 20 years shows very little in the way of big exponential moves. However, the decline in rates (and rise in prices) for long-term Treasury Strips that has occurred in the last 15 months is sharp enough to warrant the reduction in positions that I began recommending at the beginning of the year when we dropped back below 2.5%. 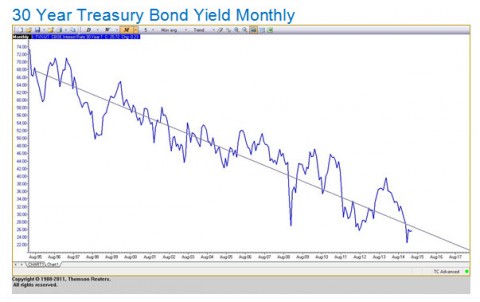 One of the things that makes “leaving money on the table” in one investment less painful is the prospect that an alternative vehicle exists in which to deploy the funds that looks more like a buy from both Rothschild’s and Farrell’s interpretation of tactical investment strategy. Subtle shifts in asset allocation from long-term Treasury Strips (which have clearly led the way in the domestic bond market) toward municipal bonds and alternative investments such as Managed Futures seem to be appropriate to consider. While municipal bonds correlate extremely closely with Treasury bonds, Managed Futures are almost entirely uncorrelated, and therefore offer the added benefit of much more powerful portfolio diversification.

When Experts All Agree, Watch Out

As an aside, Rule #9 (“When all the experts and forecasts agree, something else is going to happen”) is more than a bit tough on the Market Analysis profession, but it is true, nonetheless. The current financial forecast that is practically unanimous among the “experts” is that the Fed will be raising short-term interest rates sometime soon and therefore, bond yields have nowhere to go but up (and bond prices have nowhere to go but down). As a bond bull, this is particularly comforting. But “something else is going to happen” does not necessarily mean that the opposite from the consensus view must happen. After all, the Fed can hardly lower short-term rates; they are at 0% already. The most important message that I get from Rule #9 is to give plenty of thought to what the markets will look like if for some reason (like 0% inflation and sub-1% GDP growth which are likely for the first quarter), the Fed does not raise rates. After all, even as great as the bond market has performed, particularly during the last 15 months [Note: Bonds have corrected significantly since this report went out on April 9. RA], how would it do going forward from here if a Fed rate hike was priced out of the market? And what if they tightened and bonds actually rallied? Stranger things have happened. In fact, every single rally in bonds since Quantitative Easing was introduced by Ben Bernanke in 2009 has occurred when they shut it (QEI, QEII and QE Infinity) down! The likelihood, based on Rule #9 is that probably, bonds would continue to provide excellent performance.