The Wall Street Journal inadvertently forecast Monday’s vicious short-squeeze rally with this headline: Calm Market Turns Choppy. Strictly speaking, the word “choppy” implies that stocks have moved both up and down. In this case, however, they had only moved one way — i.e., steeply down — at the time the headline was written.  How did the editors at the Journal “know” that a buying panic on Monday would turn Friday’s plunge into “chop”? Actually, they didn’t.  It is beyond the news media’s straitened understanding of the real world to imagine that Friday, when the Dow Industrials fell by nearly 400 points, might have been the beginning of a bear market avalanche. 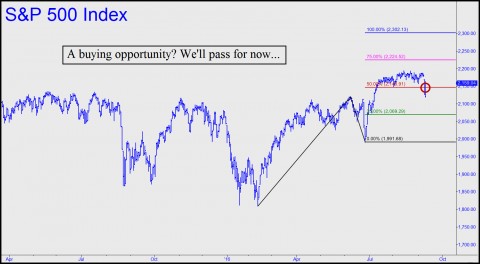 To be fair, permabears may not have done much better as prognosticators. Many of them probably lacked the objectivity to see Friday’s plunge as anything but the beginning of a bear market. It had been more than two months since the stock market had suffered a bad day, and so it would be perfectly natural for die-hard bears to think that their time had finally come — especially with the steady stream of bad economic news that has accompanied the dog days of summer.

For our part, although we’d have to concede that a 5,000-point drop in the Dow would feel right as rain, we’ll stick with what we know — i.e., technical analysis — to help us forecast the markets accurately.  In that regard, the S&P 500 generated a buy signal on Friday when the index crossed down through the red line. A 2093 stop-loss tied to a 2302 target would apply, but there are much less risky ways to get aboard, as we shall endeavor to determine in the days and weeks ahead.  Do we actually believe that the implied 140-point rally to 2302 — equivalent to about 1100 Dow points — is just around the corner? Not hardly. But we are here not to share “beliefs” with you, only hard, cold data culled from our charts. In practice, and most immediately, that will entail paying close attention to what the news media would presume to call “chop”.  If the S&Ps were to take another leg down without first hitting a new record high, and if the downtrend were to take the form of an abcd pattern that exceeds its “d” target, then bears will have reason to take encouragement. And why not? It is only diehard bears who fully understand that the economic world cannot return to sanity as long as stocks continue to waft higher on an unprecedented, global tide of digital money plucked from the air.