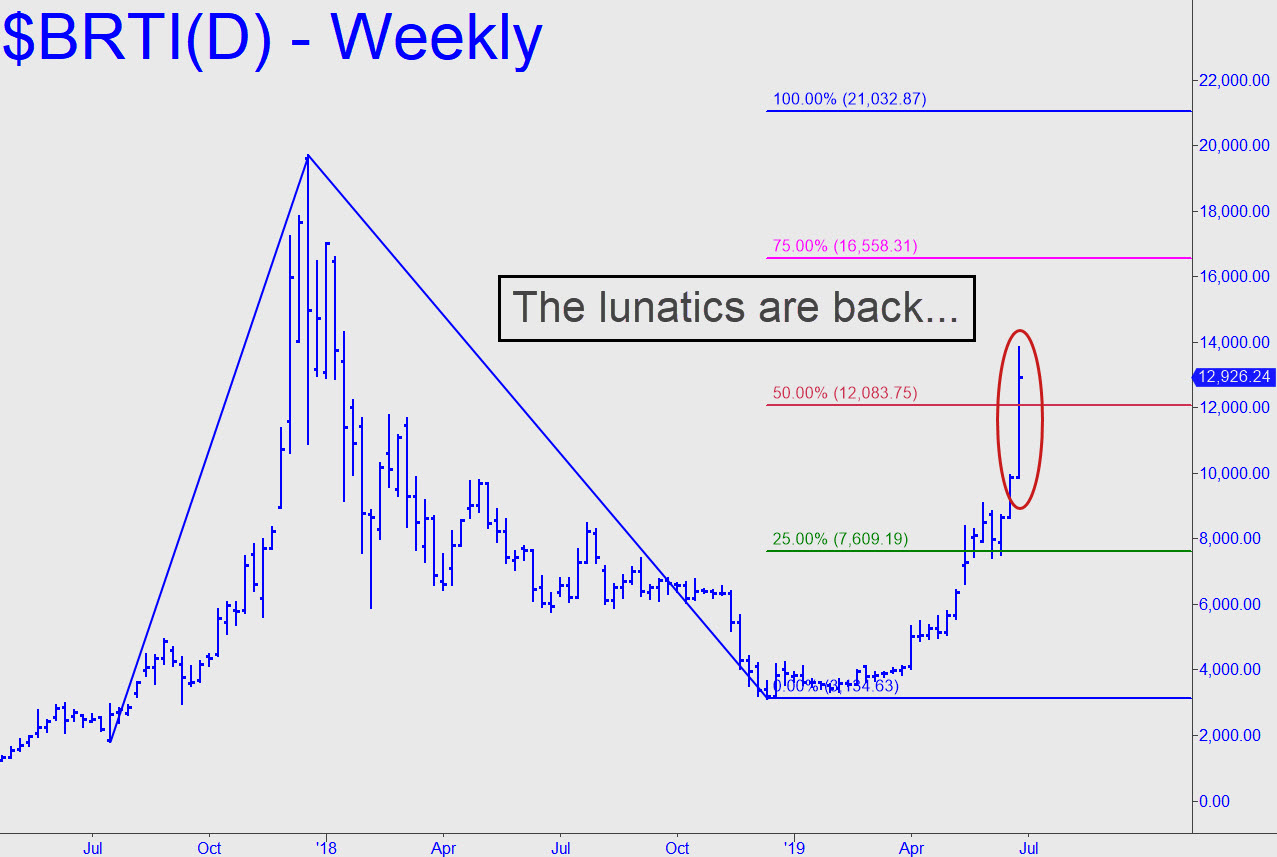 The lunatics are back, pushing bitcoin with the same psychotic zeal they showed blowing the 2017 bubble. I am updating with a new target at 21,032 that is based on a slightly revised rally pattern (inset). Judging from the way buyers impaled the pattern’s 12083 midpoint resistance today, it seems extremely unlikely this surge will fall short of the target. I try to avoid the use of the word ‘extremely’, but in this case my confidence that 21,032 will be achieved is close to absolute.

When I originally projected a move to 19,850, BRTI, a CME index that tracks bid/asked spreads in real time across many bitcoin markets, was trading for around 8,000. That was a little more than a week ago, and I could not have imagined at the time that we’d be halfway there so soon. I doubt that BRTI will cover the remaining distance as quickly, but if it does, it will describe a mania with a lifespan more meaningfully measured with a stopwatch than a calendar. If the Hidden Pivot resistance at 21,032 fails to stop the stampede — and I do NOT expect this resistance to give way easily, if at all —  I’ll be out of good targets to share with you._______ UPDATE (Jun 27, 5:23 p.m.): Finally, a correction painful enough to rebuke bulls, especially if it lasts for a few more days. They’ll be back, for sure, but many are undoubtedly hanging on, or buying the dip, in expectation of the next explosive rally. They have little to fear if my 21,032 target is to be reached, a prospect that I regard as 90% likely. In the meantime, if the pullback continues to 7609 (shown as a green line in this chart), that would trigger a very enticing ‘mechanical’ buy, stop 3133, for a shot at 21,032. Initial theoretical risk would be $4,476 per bitcoin, and I am not recommending the trade unless you have an account with at least $500,000 in it.  Otherwise, you can trade fractional bitcoins via a Coinbase pro account, as suggested by our resident bitcoin expert, Formula 432, in the Ricks Picks trading room.