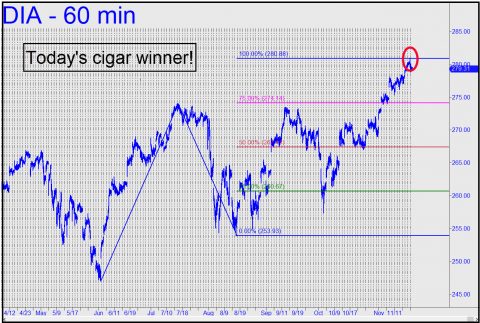 Regardless of whether today’s high turns out to be the mythical Mother of All Tops, it was easy money for anyone who initiated a short position in DIA as I’d suggested.  Weeks ago, Rick’s Picks spotlighted what stood to be an important Hidden Pivot rally target at 280.88. When it was missed by just 0.04 points at Tuesday’s high, DIA subsequently dove to 278.78, equivalent to 200 Dow points, causing near-the-money put options to at least double in price in mere hours. The DIA rally target was offered as an alternative to one at 2128.50 in the E-Mini S&Ps, since not all subscribers trade futures. The latter had already produced gains of as much as $800 per contract on Monday for subscribers who reported taking a position. This could still turn out to be a major top, but even if the highs are marginally exceeded this week, I doubt the broad averages can go much higher without a long overdue, brutal correction first. This is a logical place for it to start.